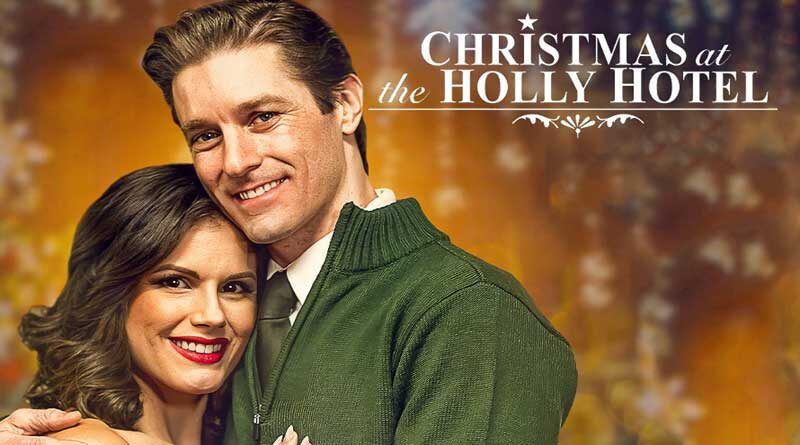 How many of you have spent a lazy day curled up on the couch binge watching Christmas movies on Hallmark, Lifetime or another cable network? Guilty as charged here as well.

Last weekend, however, I gussied up in a bright red cocktail dress and silver wedge heels and ventured out for the premiere of a very special holiday film: Christmas at the Holly Hotel, at the historic 1928 Redford Theater. After procuring a glass of sparkling wine and milling around the lobby among the nearly one thousand attendees, I made my way to the balcony to patiently await this locally produced movie to begin.

Christmas at the Holly Hotel was filmed last winter at the historic 1891 Holly Hotel (which sadly was damaged by the third fire in its 132-year history this past summer) by Joel Reisig of JPR Studios. Joel has been making movies since 2008 and has produced over 35 feature films with distribution deals to Universal Studios, Netflix, Showtime, Lifetime, Redbox, Walmart and others (including global reach in various languages).

As the curtain parted and the opening scene played out, there were cheers and whistles from the audience – clearly Holly residents or family and friends of the cast, whose names were emblazoned on the screen. The energy throughout the Japanese inspired theater was powerful, and you couldn’t help but smile.

John Hirst built this massive three-story, red brick Queen Anne style hotel (which he originally called The Hirst House) and it was considered the social hub of the village, situated near a railroad line with as many as 25 trains a day during its heyday. Every Michigan governor since 1979 has dined at The Holly Hotel and in 1992, President and Mrs. George H.W. Bush visited while on the campaign trail. Years prior, temperance crusader Carrie Nation made a notorious stop where she was rumored to have clubbed hotel guests with her umbrella and began busting whiskey bottles with her signature hatchet. Over the years, the building has been known as the Allendorf, Holly Inn and Holly Hotel – the perfect backdrop for a Rom-Com (Romantic Comedy), no matter the season.

While much of the storyline is fiction, there are tidbits of fact that weave throughout – including the names of the current owners George and Chrissy Kutlenios, who restored the building after its 1978 fire (65 years to the day from the 1913 blaze) to its original grandeur. They opened the fine dining establishment in 1979 and it was added to the National Register of Historic Places the following year.

The leading lady is 30-year-old Kathy Kutlenios (daughter of George and Chrissy) played by metro Detroit’s Jesi Jensen. An independent and dedicated New York City food critic (and would-be-chef), Kathy reluctantly agrees to return to the small town of Holly, Michigan for Christmas while she awaits an offer of a dream job with The New York Times.

Back in Michigan, Kathy struggles at times to fit back into the small town starting with her first introduction to police officer, Matthew Williams – played by Joe Kurak of Ohio. Charming and kind, Matthew and his quippy grandmother (portrayed by Shirley Moon Koebbe) soon win Kathy over, giving her reason to consider Holly may offer more than she thought. Regular phone calls with her bubbly NYC BFF Danielle (Kristen Ryda) draw comparisons between Kathy’s life path and the abundance of romantic Christmas movies the two admit to watching religiously (big city girl returns home, falls in love and is forced to make a life-changing decision).

An undercurrent of suspense carries throughout the story, as the Kutlenois try to lure Kathy to take over the role of executive chef of their esteemed restaurant, specifically for Christmas dinner where special (secret) dinner guests from the family’s past life in Washington DC are expected.

Occasional visits by the ghosts of cigar-smoking Mr. Hirst and a former hostess of the house, Nora Kane, also add an extra element to the story as the two spirits scheme to bring Kathy and Matthew together (while reinforcing the well-known haunted history of the Holly Hotel). I don’t think it’s a real spoiler that they’re successful in their endeavor (it is a Christmas romantic movie after all). 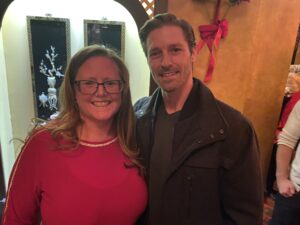 While the plot wasn’t groundbreaking and was occasionally predictable (as almost all modern romantic holiday movies are), there was something special about seeing local actors portrayed in local settings throughout the film (and based on the audience reaction, others felt the same).

As an added bonus, partway through the film, Joe Kurak (Officer Matthew Williams) made his way to the balcony to watch the ending and I’m sure observe the audience and sat directly behind him. As the credits rolled and the lights came up, I was able to talk briefly with him (and later catch him in the lobby for a photo). Just another film groupie…at least for Michigan made films!

A handful of additional showings of Christmas at the Holly Hotel are scheduled in the coming weeks around southeast Michigan (see below) or you can catch this new holiday favorite on YouTube, Netflix and other streaming services.

For other Michigan themed holiday movies: Michigan Holiday Movies Worth the Watch  and this special piece about White Christmas and its ties to Charlevoix, Michigan.

Dinner and a Movie