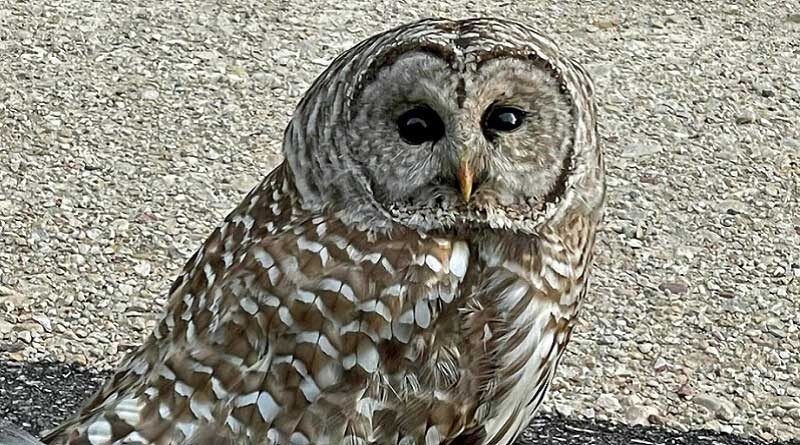 Beth Maatta has spent the past 17 years serving and protecting the communities in which she has lived – as a law enforcement officer, advocate and a guardian of injured wildlife.

It was a high school internship with the City Police in Hancock (where she was born and raised) that first piqued Maatta’s interest in the field. She began her career as a 911 dispatcher in nearby Laurium while attending Finlandia University, where she graduated with an Associates in Applied Science (AAS) in Criminal Justice. She attended the Regional Police Academy at Northern Michigan University in the summer of 2004, worked as a Security Police Officer at the former Marquette General Hospital (now Duke Lifepoint) and was a part time officer for various departments including in Hancock and Lake Linden. She landed at Michigan Tech University (MTU) as a Public Safety officer in early 2016 and this past September was promoted to Sergeant.

In addition to general patrol, Maatta is one of three officers serving with the Special Victims Unit (SVU), working with other local organizations to assist and advocate for those who have experienced interpersonal violence – sexual assault, intimate partner violence, dating violence, stalking and child abuse – ensuring survivors are treated with compassion and respect. She is also a certified child passenger safety technician.

So how does a seasoned police officer become a rescuer of animals and birds?

“One of my dispatchers here at the MTU is a small mammal rehabilitator,” Maatta says. “I began getting involved with her and rehabilitation and eventually went on to get my own permits. I began with small mammals such as squirrels. I have rehabilitated turtles (still have one that will stay with me for the winter), a bobcat, a coyote and a fisher.”

Maatta soon focused her sights on a specific sector of the avian world – raptors. She connected with the late Jerry Maynard of the former Chocolay Raptor Center in Harvey (founded in 2012) who mentored her early in her quest.

“The bird chose me, you could say,” she says. “I started with pigeons because they are not protected by the Migratory Bird Treaty Act (MBTA).”

According to the Department of Interior U.S. Fish and Wildlife Service (FWS), “the MBTA [of 1918] prohibits the taking (including killing, capturing, selling, trading and transport) of protected migratory bird species without prior authorization” from FWS.

“Before you can apply for your permit through the state a person needs to take the International Wildlife Rehabilitation Council (IWRC)’s Basic Wildlife Rehabilitation course and then mentor under a permitted rehabilitator for a year,” Maatta notes. “A letter is then submitted to the state requesting the permit, along with a letter from the mentor rehabilitator, a veterinarian’s letter stating they agree to work with you and treat the wildlife, and you must pass an inspection by the DNR. To obtain a federal permit which is needed to rehabilitate birds covered under the MBTA (all but non-natives or invasives) you must first have a state permit and then gain 100 hours of experience with a federally permitted rehabilitator and send it pictures and detailed measurements of your enclosures/containment areas which must meet the minimum standards for the birds you wish to rehabilitate.”

After Maynard’s retirement and subsequent death in August 2022, Maatta became the only certified raptor rehabilitator in Michigan’s Upper Peninsula (and one of only a dozen or so in the state of Michigan). However, as working with eagles requires an additional federal permit, something Maatta has yet to receive, she cannot rehabilitate them long-term.

The nearest raptor rehabilitation facility in Michigan is the Skegemog Raptor Center near Traverse City, operating under the direction of James Manley. Geographically, Wisconsin facilities in Rhinelander (Wild Instincts) and Antigo (Raptor Education Group) may be closer, but due to the Highly Pathogenic Avian Influenza (HPAI) outbreak this year, Maatta is not allowed to transport wild birds across state lines for treatment.

The rehabilitation is just one area of focus for Maatta. She is also targeting one key issue that impacts these winged creatures – lead poisoning (from ammunition).

The Michigan Department of Natural Resources (DNR), notes that lead can remain in the environment for 100 to 300 years before it starts to break down and is present in more than 130 wildlife species due to ingestion. Michigan currently has more than two dozen species of raptors including over 900 pair of bald eagles throughout both peninsulas.

A study conducted by the U.S. Fish and Wildlife Service in conjunction in with Michigan State University, the Michigan DNR and others between 1986 and 2017 looked at the cause of death among almost 1,500 bald eagles and found that while vehicular trauma was the primary killer, lead poisoning came in second. Lead exposure can cause debilitating conditions and ultimately death, especially with birds of prey.

“It’s a more serious issue in birds, which can get lead poisoning by ingesting lead pellets, bullet fragments or certain types of fishing tackle – which are used in hunting and fishing, two cherished, popular and legal outdoor traditions, according to the DNR. “A single lead sinker (a weight attached to fishing line) can kill a loon, while just one pellet can be toxic to waterfowl.”

When predatory birds scavenge on hunter-killed animal carcasses, they ingest lead from bullets, slugs and shotgun pellets – with a piece of lead the size of a grain of rice having the potential to be fatal. Miniscule fragments can quickly erode a bird’s stomach acid and enter their bloodstream over a prolonged period of time. Birds exposed to lead poisoning can suffer inability to maintain balance, overall weakness, listlessness, lack of muscle coordination, decreased appetite and impaired vision. These impaired reflexes and reactions can make it difficult for these birds to catch the prey needed to sustain themselves and also impact their ability to protect themselves in the wild.

“I strongly encourage people to educate themselves on the issues before making a decision,” she says. “Read up on all sides of an issue. Learn how lead poisoning affects humans and animals a like.” She also urges people to switch to lead-free alternatives if possible or if that is not an option, doing things like burying gut piles deep enough to keep animals from getting to them.

Through her public outreach Maatta is dedicated to making a difference, working a group called Sporting Lead-Free, an organization she recommends to others.

“Seeing what lead ingestion can do to animals like eagles first-hand, many rehabilitators understandably want to share information about lead ammunition and wildlife,” says Bryan Bedrosian, Director of Sporting Lead-Free. “It’s critical to understand that hunters still need to know about the issue. Having positive, open conversations about potential effects of lead ammunition is much more effective than forcing people to change. Sporting Lead-Free is proud to be able to provide the educational materials for people like Beth who are on the front lines and need to have that pro-hunting, pro-education and non-political conversation.”

Maatta has also helped established the U.P. Wildlife Rehabilitation, a non-profit with three home-based sectors in different locations in Houghton County – Lake Linden, Hancock and Chassell (but also covering Keweenaw, Baraga and Ontonagon counties) – each specializing in different species and with a goal to rehabilitate injured, orphaned, displaced and diseased wildlife to ultimately return them to the wild, whenever possible.

To aid in rehabilitation of her birds, Maatta utilizes a new 12-foot-wide by 12-foot high by 50-foot-long FWS-approved full flight cage (set up on her own property) to aid on physical therapy – something essential for injured raptors so they can regain range of motion before being released back into the wild, which is always the goal. Prior to that, Maatta used a much smaller 16 by 8-foot enclosure designed for songbirds.

“They have to catch their food to survive and need to be 100%,” Maatta says, making the larger cage all that more important to their rehabilitation. The expansive enclosure allows the birds to spread their wings and regain strength, while giving them the opportunity to hunt for food while still being protected from other predators.

The cage was made possible due to a recent $40,000 donation by Edward “Bud” Cole of Eagle River. His contribution also funded a diagnostic machine, housed and operated at a local veterinary clinic, used to calculate lead concentration levels in the birds’ blood. As lead accumulates over time without intervention, knowing exactly how much each patient bird is dealing with helps in their treatment and rehabilitation. Birds with high levels undergo a chelation treatment in which they were injected with a drug that binds to the metals and ultimately removes it from their bloodstream. While eagles still need to be treated off-site, other birds and raptors can be dealt with locally.

While the U.P. Wildlife Rehabilitation program is small in terms of the number of individuals who work to rehab creatures of all sizes, their impact is mighty. Among the short-term goals is updating the enclosures used to protect animals being treated.

“There is always maintenance and updates to be done, as well as adding a large mammal enclosure,” Maatta notes. “We have noticed the need for an enclosure that would be suitable for larger predator type animals such as fox, coyote and bobcat.”

Long term goals include finding an institution – such as a tribe or university – to undertake eagle rehabilitation.

“While I would love to do it myself, I am looking to the future and it makes more sense to have it institutionalized so each time a new rehabilitator succeeds another one, they don’t have to start from scratch again,” Maatta says. She also notes the need to expand the rehabilitator network throughout the region and the state, given that compassion fatigue and burnout are real issues within the field.

And while Maatta is the sole raptor rehabilitator in the U.P., and one of three active individuals with the local program, she recognizes it takes a community for her to follow her passion.

“We could not do this work without our fantastic community. From people being willing to transport animals across the U.P., to cleaning cages and enclosures, and donating items and money, we just couldn’t do it alone. They allow us to do the work we do.”

That community includes Maatta’s commanding officer, Brian Cadwell, Director and Chief of MTU’s Department of Public Safety & Police Services, who recognizes the impact she is making for the wildlife of the U.P.

“Beth’s dedication to raptor rehabilitation is truly amazing,” Cadwell says “She has spent countless hours of her time rescuing and caring for birds in dire situations in order to return them to the wild in a healthy condition. Beyond that, she is being proactive in her attempts to educate hunters about the dangers that lead ammunition poses to raptors if they ingest it from the carcass of a dead animal.”

Maatta is just as dedicated to her day job, where her commitment to protect and serve that community makes a noticeable difference.

“She brings the same energy and commitment to her duties as a Patrol Sergeant,” says Chief Cadwell. “She is always seeking the best training so that she can provide an excellent response to those who are victimized. Beth truly cares for the members of our campus community and it is evidenced by the work that she does on their behalf.”