Since 1997, Dianna has been presenting lively and upbeat programs about the area’s historic lighthouses, ghost towns, islands and other unique destinations and activities in her home state of Michigan. Dianna is a passionate professional speaker, with a degree in communications from Western Michigan University and 25+ years experience in radio broadcasting and public speaking.

Dianna is a member of the U.S. Lighthouse Society, Great Lake Lighthouse Keepers Association, Michigan Maritime Museum, Historical Society of Michigan and the Michigan Hemingway Society. She also sits on the Ferris State University Hospitality Advisory Board, is publicist for the Michigan Brewers Guild and is Executive Director of both the Kent County Hospitality Association and Michigan Craft Distillers Association. Over the years, she’s been involved in countless organizations such as the Michigan One Room Schoolhouse Association, Allegan County Tourist Council, Michigan Culinary Tourism Alliance and Downtown Market Grand Rapids Board.

Want Promote Michigan’s Dianna Stampfler to speak at your next event? For program fees and expenses, click for details!

Thanks to a plethora of cable shows, books and podcasts, there is a growing interest around the world in what is called “Dark Tourism” – specifically haunted sites and events. Not to be confused with seasonal “haunted house” attractions, these year-round destinations are as much about digging up history as they are about the hunt for spirits and connecting with the afterlife. Dianna Stampfler – author of “Michigan’s Haunted Lighthouses” and “Death & Lighthouses on the Great Lakes” – has been writing about haunted restaurants, hotels, attractions, tours and festivals around Michigan for years (mostly based on first-hand research). Over the years, she’s connected with several mediums, investigators, paranormal groups, tour operators and event planners who not only recognize the impact that paranormal tourism has on their communities but they celebrate their haunted history in a respectful, educational and entertaining way. This presentation will shed light on the history of Michigan’s dark side and provide ideas for paranormal tourism destinations and events in the state.

Death & Lighthouses in the Great Lakes

Losing one’s life while tending to a Great Lakes lighthouse — or any navigational beacon anywhere in the world for that matter — sadly wasn’t such an unusual occurrence. The likelihood of drowning while at sea or becoming injured while on the job ultimately leading to death were somewhat common back in the late nineteenth and early twentieth century. Death by murder, suicide or other unnatural and tragic causes, while rare, are not unheard of. In fact, more than dozen lighthouse keepers around the Great Lakes met their maker at the hands of others – by fire, poisoning, bludgeoning and other unknown means. A handful of these keepers, either because of depression or sheer loneliness, took their own lives. A few we may never know the true story, as the deaths now 100 or more years ago, weren’t subjected to the forensic scrutiny that such crimes are given today. In the pages of Death & Lighthouses of the Great Lakes: A History of Misfortune & Murder – coming out in March 2022 from the History Press – you’ll find an amalgamation of true crime details, media coverage and historical research which brings the stories to life…despite the deaths of those featured.

Beginning in the 1800s, covered bridges were being constructed around the country to help locals (and visitors) get across the many rivers and streams that meandered through the countryside. Those early builders thought it was easier to climb atop the structures to replace roof shingles when necessary rather than working while standing in the water to repair floorboards that deteriorated over time. Between the mid-1860s and 1880s, a handful of these beautiful bridges were built throughout rural Michigan although over time most have been damaged by Mother Nature or worse yet, vandals. Thankfully, most have been rebuilt and feature historical markers which will share their stories for generations to come. Some bridges have been moved to Michigan from other states, or transplanted from private property to county or regional parks making them accessible for others to enjoy.

What is it about lighthouses that attract ghostly spirits? Maybe it’s simply a passion that will not go away. Lighthouse keepers were known to be extremely dedicated to their profession and it seems that many were never able to give it up — even after death. More than 30 lights in Michigan are rumored to be haunted. From the smell of cigar smoke at Seul Choix Point Light to the mysterious housekeeping at White River Light Station and the antics at Waugoshance Shoal, these stories will entertain all ages. This popular program is coming from the pages of “Michigan’s Haunted Lighthouses” —  a book by Dianna Stampfler, published in spring 2019 by The History Press. Read the Table of Contents for the list of featured lighthouses.

They were women before their time, taking on the romantic, yet dangerous and physically demanding job of tending to the beacons that protected the shoreline. In all, some 40 women have been identified who excelled in this profession over the years — dating back as early as the 1840s and as recent as present day. Nearly 70 images of keepers, their families and their lights make up this presentation. The program includes readings from newspapers and autobiographies, as well as handouts including the list of featured ladies and additional reading references for attendees.

Made in the Mitten: Savoring Michigan’s Rich Foodie & Ag History

Michigan is the second-most agriculturally-diverse state in the country. From cherries and grapes to blueberries and pumpkins, peaches and apples to asparagus and celery (and many, many more), the Great Lakes State is often referred to as the “Mitten of Plenty.” Add to that a growing industry focused on locally-sourced products such as cheese, poultry, sauces, jams, breads, chocolates and SO much more, and you have a feast just waiting to be devoured. Michigan is also home to many significant food manufacturers — such as Kellogg’s, Better Made Potato Chips, American Spoon Foods, Biggby Coffee, Jiffy Mix and Kowalski meats, just to name a few — that have helped shape Michigan’s culture. This program will not only introduce audiences to Michigan’s rich foodie and agricultural history, but will allow everyone to sample a few Michigan-made products as well!

Michigan is home to countless “one of a kind” treasures – from the famed Mackinac Bridge to the internationally-recognized Scottville Clown Band and the uniqueness of the Petoskey Stone to the quaint Earl Young Homes in Charlevoix. Attractions – such as the Bottle House Museum in Kaleva, the Mystery Spot in Saint Ignace and the replica of the Eifel Tower in Paris – make for great adventures when traveling the Great Lakes State. Settle in for a virtual tour of some of Michigan’s noted, as well as many of its lesser known, sites worth visiting on your next road trip.

Vacationers have been looping the lake for generations — but the official “Lake Michigan Circle Tour” route wasn’t established until the 1980s when the Michigan Department of Transportation teamed up with West Michigan Tourist Association (WMTA) to create the route and its official guidebook. Along the way, find more than 100 lighthouses, countless islands, unique attractions, parks and natural areas, miles of glorious beaches, quaint harbor towns, an internationally-recognized urban center and one “modern marvel” — the Mackinac Bridge. You are invited to take a virtual tour to some of the Lake Michigan Circle Tour’s well-known destinations and its best kept secrets with Dianna Stampfler, who worked for 7 years at WMTA as a primary researcher and promoter of the route.

Michigan is a giant snow-filled playground when Mother Nature rolls out the winter carpet. Miles of trails available for snowmobiling and cross country skiing, dozens of slopes for downhill skiing and acres of wooded areas for snowshoeing are just waiting to be explored. There’s also plenty of opportunity for more extreme activities such as luging, rafting, ice sailing, camping and dogsledding. Those looking for less actual activity will enjoy one of many winter food offerings, including the Gourmet Glide, Zhivago Night, Mountaintop Dinners and Elk Viewing Carriage Rides. Don’t forget about the festivals such as Tip Up Town, Suds-n-Snow, Toast the Passion, Motown Winter Blast and the Women’s Winter Tour. Learn about the exciting things just waiting to be experienced in Michigan during the winter. 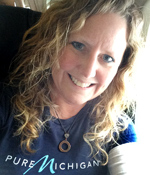 Want Promote Michigan's Dianna Stampfler to speak at your next event?