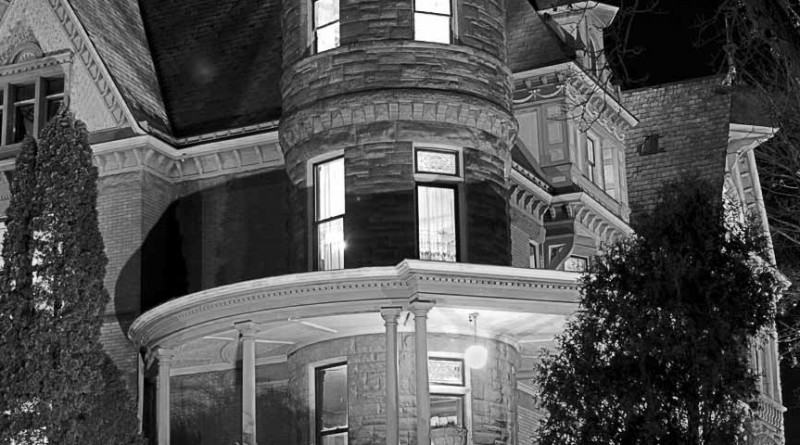 I am NOT a fan of haunted attractions – meaning the fabricated “ghostly” attractions built up in abandoned warehouses this time of year. I will not watch scary movies with the likes of Jason or Freddie. Yet, I’m intrigued by legends of historic sites that house such unsettled souls.

I’ve researched, written and presented on “Michigan’s Ghostly Beacons” for nearly 20 years (and am actually working on a book on this topic). I’d say about two dozen of Michigan’s 120+ beacons have haunted stories attached to them. You can read one of my articles on this topic Here.

In the fall of 2012, I shared several ghost stories from Whitefish Point, the former Red Brick Inn in Plainwell, the Grill House in Allegan and The Village at Grand Traverse Commons in Traverse City in an article that appeared in Michigan HOME & Lifestyle Magazine called Spirited Stories: Michigan’s Ghostly Encounters.

In anticipation of Halloween, I started digging around looking for other sites rumored to be haunted…here’s what I came up with!

Henderson Castle, Kalamazoo. Frank Henderson built this elaborate castle for his wife, Mary, in the late 1800s. Both their spirits are said to still walk the halls and floors of this charming bed-and-breakfast…but they’re not alone. Apparently, there is the ghost of at least one little girl, a veteran of the Spanish-American War who served with the Henderson’s son and even that of a dog.

National House Inn, Marshall. Built in 1835, this historic inn was once a stop on the Underground Railroad and today remains home to a “Lady in Red” who makes her appearance known to staff and guests.

Felt Mansion, Laketown Township. Dorr Felt built this elaborate 12,000-square-foot Georgian-style mansion in the 1920s and naming the hoe and its property Shore Acres Farms. Some believe his wife, Agnes, is the spirit that walks the halls and opens the French doors to her bedroom. Over the years, the property has been home to the St. Augustine Seminary for Boys and the Dunes Correctional Facility, a minimum-security prison. The area is also rumored to be haunted by “Melon Heads” who roam the woods around the property!

Holly Hotel, Holly. According to its website, this been referred to as the most haunted historic building in Michigan, and perhaps the most haunted in America. Many people have smelled cigar smoke, even though they didn’t know that original owner of the Inn smoked cigars. The description of flowery perfume is often strikingly similar as well. And, for some reason, the meat cleaver is the favorite toy for a little girl’s spirit who still plays in the kitchen and on the banquet room steps.

The Terrace Inn, Bay View (Petoskey). Ghosts have been seen, heard, and felt by several guests and employees.  Documented records written by those people who chose to share their experience can be signed out at the front desk on request. Many paranormal investigations have taken place here, and psychics, “sensitives” and others with extra sensory abilities have filled in the missing pieces of the spirits inhabiting the Inn. For a walking tour of “Haunted Petoskey,” check out Petoskey Yesterday.

Mission Point Resort, Mackinac Island. Allegedly haunted by the ghost of a man who committed suicide in the 1960s after being rejected by his girlfriend. Since then it is said that his ghost prowls the grounds of the resort. He is often seen on the bluff behind the hotel, or in the resort’s sound stage and theater and is said to be rather playful, seeming to enjoy playing practical jokes on visitors or guests to the hotel, with some of his favorites being turning on the lights while guests are sleeping, hiding personal belongings, or rearranging items or even furniture. The SyFy channel even spent time at this highly haunted property located on the famed 3.8-square-mile Mackinac Island in the Straits of Mackinac.

For other Michigan ghost stories: