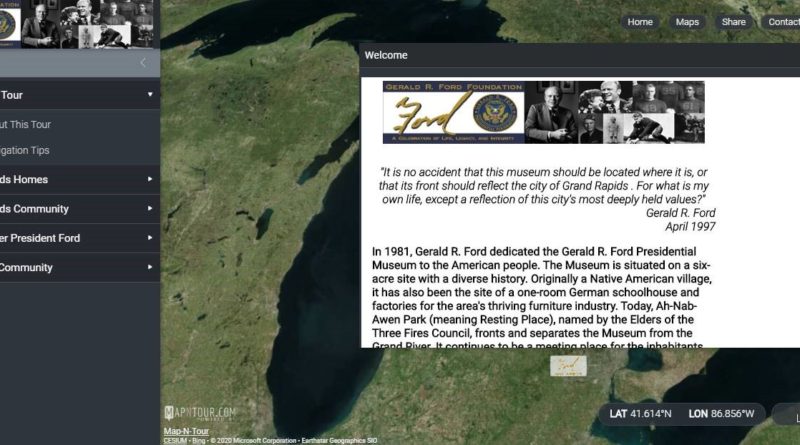 He may have been born on July 14, 1913 in Nebraska as Leslie Lynch King Jr., but most Michiganders (and Americans) know him as Gerald Rudolph Ford Jr., the 38th president of the United States.

Following the separation and eventual divorce of his parents, the young boy was renamed after his stepfather (although he was never officially adopted) and spent his youth growing up in Grand Rapids, Michigan where he earned his Eagle Scout badge and excelled at sports. He went on to attend the University of Michigan where he studied law and played football. Ford served in the Navy and later married before serving in the Michigan House of Representative from 1949 until 1973 at which time he was elected as 40th vice president. Ford assumed the role of president on August 9, 1974 following the resignation of Richard Nixon, serving until January 1977.

Just four years after he left the White House, the Gerald R. Ford Presidential Museum was dedicated in downtown Grand Rapids on a six-acre site overlooking the Grand River and Ah-Nab-Awan-Park (meaning Resting Place). It was here, in December 2006, that Ford was interred following his death at the age of 93 at his Rancho Mirage in California. His wife, Betty, passed away in the summer of 2011 (also at the age of 93) and was once again at rest at her husband’s side.

Ford was the only U.S. president to hail from Michigan and now, decades after his service, his legacy is being celebrated in a new digital way.  The Gerald R. Ford Presidential Foundation has partnered with Midland, Michigan-based Map-N-Tour to develop a web and mobile app to educate and entertain visitors on a self- guided tour of sites around Grand Rapids that help tell the Ford story.

“The Map-N-Tour app builds excitement about the life of President and Mrs. Ford,” says Kristy Lecceadone, Communications and Operations Associate at Gerald R. Ford Presidential Foundation. “With it, guests can travel through time to see the humble beginnings of a President and bring his story to life by visiting the places he loved.”

Organized into four easy-to-search categories, this tour includes seven home addresses where the Ford family once lived — including the address, years of residence, a short description of the property and a photograph. Other buildings around town (more than 15 in all) are also featured like the YMCA / Fitzgerald Building (where a young Ford and his stepfather would go swimming), Grace Episcopal Church (where Gerald and Betty Ford were married in 1948) and of course, the museum which bears his name. Five additional Grand Rapids venues named in honor of the one-time president — such as the Gerald R. Ford Freeway and the Gerald R. Ford Fieldhouse — as well as a handful of Ann Arbor sites (most notable The Big House where Ford played on two championship Wolverine football teams) are also featured in the app.

“This app is a delightful way to let people to visit online or in person where this great man created a social club with his boyhood friends, learned the importance of childhood chores, sacrificed with his family through the stock market crash of 1929, met as a Boy Scout attaining the rank of Eagle Scout, and where he began his football and law career,” says Denny Henson, President of Map-N-Tour. “Through the virtual tour you can even watch the funerals of President Ford and his wife Betty.”

Map-N-Tour has developed about a dozen specialized tours for communities like Ann Arbor, Bay City, Coldwater Country, Midland, Port Austin,  Traverse City History Center, Munising and the Petoskey Area, as well as a statewide tour tied to the award-winning Michigan Cares for Tourism volunteer program. Several destinations outside of Michigan are also available for free in iTunes and via Google Play.

Some community apps also feature interactive maps which are incorporated into the community’s website – as is the case with the Munising Visitors Bureau. Featuring dozens of pinned locations such as lighthouses, waterfalls, hiking trails, cultural sites and regional scenic tours make up this extensive platform meant to get visitors off the beaten path to explore the unique attributes that make this area “picture perfect.”

“As we move forward, we have started to create a platform and partnerships that will let us blur the boundaries of individual tours into larger regional and state experiences giving visitors the ultimate travel experience.  This opens the opportunity for collaborative marketing –which enables our tourism industry to do even more.  We have a new mobile interface coming soon.  This, with the effective one-of-a-kind capabilities we offer communities and venues to reach visitors enroute, creates a new marketing paradigm with a simple affordable mobile presence for all budgets.  We are poised to put Michigan on the map and draw people to destinations for positive economic impact statewide.”