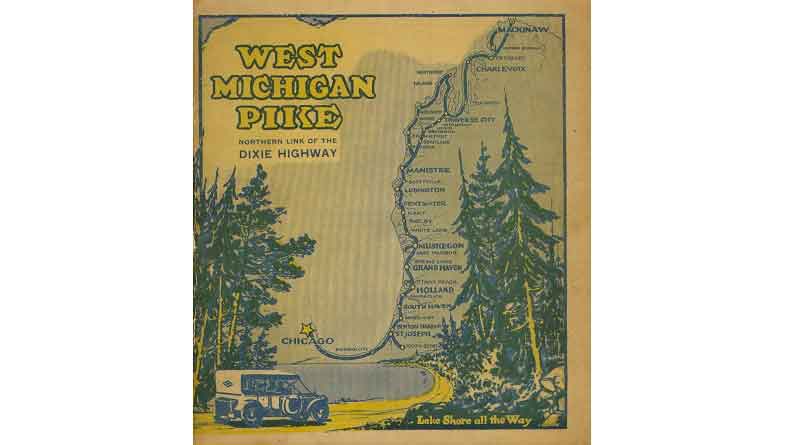 Last summer [2016], a 184-mile stretch of the West Michigan Pike, from St. Joseph to Silver Lake, became the state’s latest Pure Michigan Byway™ during a public ceremony at Muskegon’s Heritage Landing. The Michigan Beachtowns Association, which represents more than a dozen shoreline communities, collaborated with Travel Michigan and the Michigan Department of Transportation (MDOT) to develop the byway.

“As the route that opened up tourism for west Michigan back in the early 1900s, we are delighted that today’s travelers are able to recreate that experience,” says Sally Laukitis, executive director of the Holland Area Convention & Visitors Bureau, one of the members o the Michigan Beachtowns Association. “While each of our communities has changed with the times, the West Michigan Pike designation offers visitors a glimpse of the past while enjoying the roadways and amenities of today.”

First established in 1993 under the “Michigan Heritage Route” program to identify and promote state trunk lines with distinctive scenic, cultural or historic attributes, these byways were recently reorganized to align with the award-winning Pure Michigan campaign. There are more than 20 routes in six distinct categories currently designated throughout the state (MichiganHighways.org).

In 2010, the State Historic Preservation office erected a Michigan Historic Marker recognizing the West Michigan Pike in New Buffalo, the southern-most city along the full 400-mile route. The following year, award-winning authors M. Christine Byron and Thomas Wilson released their “Vintage Views Along the West Michigan Pike: From Sand Trails to U.S. 31,” which gives an historical account of the century-old route.

Construction of the West Michigan Pike first began in 1911, bringing Chicagoans to the shoreline communities of west Michigan to enjoy the natural beauty and small town charm. It was one of the nation’s first tourist roads, taking more than a decade to complete. Early on, the Pike was designated as one of the first state trunk lines (M-11), was incorporated into the nation’s first federal highway system, was widened and rerouted as a superhighway and became the first continuous hard-surface road along the Lake Michigan shore.

Side 1: At the turn of the twentieth century, deep ruts and sand made West Michigan roads nearly impassable. In 1911, the West Michigan Lakeshore Highway Association was founded to promote the construction of the first improved highway along Lake Michigan in order to bring auto tourists from Chicago to Michigan to support the new resort industry that grew up when logging ended in the region. Completed in 1922, the West Michigan Pike extended from the Indiana state line to Mackinaw City. It was designated one of the first state trunk lines (M-11) in 1917, as part of the Dixie Highway in 1923, and incorporated into the nation’s first federal highway system as US-31 in 1926. Straightened and realigned over the years, it is also known as the Red Arrow and the Blue Star Memorial Highways.

Side 2: The West Michigan Pike, advertised as “Lake Shore All the Way Chicago to Mackinaw,” was completed as a paved highway in 1922. Tourists, particularly those from Chicago who sought cooler temperatures by coming to Michigan, gained greater access to communities dotting the Lake Michigan shore between the Indiana state line and the Straits of Mackinac. In 1926 the pike (M-11) was designated US-31. By then, traffic congestion and poor road conditions were again impeding Travel. The West Michigan Pike Association, which had started the road, advocated for US-31 to be widened and rerouted in 1929 as a “superhighway.” A full-blown tourism industry with lodgings, restaurants, and attractions grew up along the West Michigan Pike and flourished into the twenty-first century.