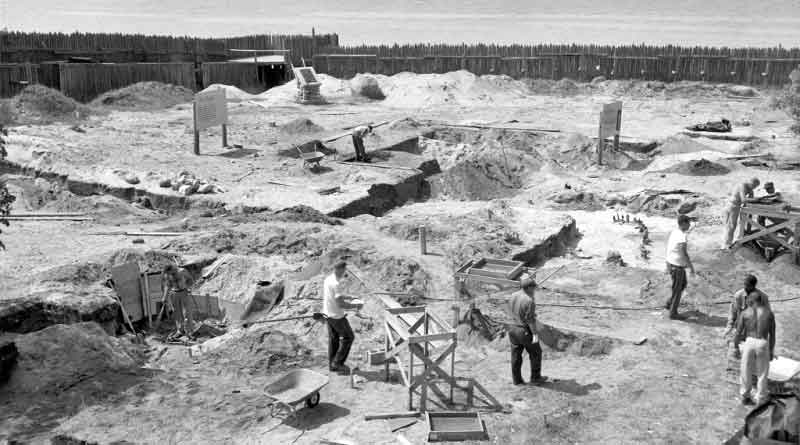 Mackinac State Historic Parks’ archaeological program began its 60th consecutive season of work at Colonial Michilimackinac, in Mackinaw City, on Friday, May 24, with the cleaning and preparation of the dig site, and the kicked-off in full on June 4.

In 1959, the Mackinac Island State Park Commission contracted with Michigan State University to carry out a season of excavation, which has continued every summer since, turning into one of the longest ongoing archaeological digs in North America.

Today, Dr. Lynn Evans serves as the Curator of Archaeology for MSHP, a position she has had since 1996. She has been a part of the Michilimackinac team since 1989.

“It is truly amazing to be part of something so big,” Evans said. “When I learned about Michilimackinac in college, I never imagined I would run the project one day. I feel a great responsibility to maintain the tradition and pass it along some day.”

The most notable building excavated in the 1970s was the most intact building at Colonial Michilimackinac, the powder magazine. In the 1980s, the home of Ezekiel Solomon, Michigan’s first Jewish settler, was excavated. Work continued in the southeast corner of the fort throughout the 1980s and most of the 1990s. In 1998, archaeologists returned to the southwest corner of the fort to tie together current results with excavations done in the 1960s.This project resulted in the reconstruction of the South Southwest Row House in 2013.

Current work inside Colonial Michilimackinac is at House E in the Southeast Rowhouse, a project that enters its 11th season in 2018. Evans guesses that there are at least six more seasons worth of work at the site, depending on various things, such as the depth of the root cellar at the site.

More than 1,000,000 artifacts have been unearthed at Colonial Michilimackinac, with more added each season. The sheer quantity and relatively short time frame the fort was occupied are a big part of what makes the collection notable. Beyond that it mostly depends on a given persons particular interests. Michilimackinac has yielded excellent examples of military items, trade goods, and religious objects. The best artifacts are on display in Treasures from the Sand, the archaeology exhibit at Colonial Michilimackinac, and in the book Keys to the Past: Archaeological Treasures of Mackinac, written by Evans.

Work has not been confined to Colonial Michilimackinac, though. The British water well, located near the Post Commissary at Fort Mackinac on Mackinac Island, was definitively located in 1965 and excavated in 1980-81. The most recent archaeological project at Fort Mackinac was the testing and excavation associated with the repair of the Fort Mackinac wall, done in 2000-01. Other projects on Mackinac Island include an archaeological survey of the Wawashkamo Golf Course, site of the 1814 battle for Mackinac Island, by a team from the Center for Historic and Military Archaeology in 2002. Additionally, excavation of the Biddle House privy in the 1970s took place and the excavation of a pre-contact site during the conversion of the Indian Dormitory into The Richard and Jane Manoogian Mackinac Art Museum.

The most extensive archaeological work done outside Colonial Michilimackinac occurred at Historic Mill Creek Discovery Park, where archaeology played a key role in the development of the site. After the site was re-discovered in 1972, excavations carried out in 1973, 1974, and 1975 revealed the remains of the dam, a ca. 1790-1810 house and separate workshop, and a ca.1820-1840 house and forge combined in one building.

Additional excavations carried out in 1979 and 1980 completely exposed the dam. Between 1984 and 1994, the excavation of the ca. 1820-1840 Millwright’s House was completed and additional work was done on the Campbell House and two unidentified structures in the historic area. Work has also been done at Old Mackinac Point Lighthouse that uncovered a privy where the barn had been located, as well as a free-standing privy site near the reconstructed warehouse.

Work will continue at Colonial Michilimackinac and the various MSHP sites as it provides a clearer look at the historic residents of the Straits of Mackinac. “We are still learning from it,” Evans said. “It gives us a glimpse into the fascinating details of daily life that weren’t written down, and insight into those who didn’t leave written records.

“We’ve (also) learned a lot about diet,” Evans continued. “We’ve learned, in a very tangible way, about the variety and quality of objects the people before us used, and how well-connected Michilimackinac was to the wider world. We’ve learned how creative they were in answering the challenges of the Great Lakes environment, including adopting Odawa and Ojibwa technology.”

More information can be found at MackinacParks.com.

Mackinac State Historic Parks, a family of living history museums and parks in northern Michigan’s Straits of Mackinac, is an agency within the Michigan Department of Natural Resources. Its sites—which are accredited by the American Alliance of Museums—include Fort Mackinac, Historic Downtown Mackinac, The Richard and Jane Manoogian Mackinac Art Museum, and Mackinac Island State Park on Mackinac Island, and Colonial Michilimackinac, Old Mackinac Point Lighthouse, and Historic Mill Creek Discovery Park in Mackinaw City. Mackinac State Historic Parks is governed by the Mackinac Island State Park Commission, established in 1895 to protect, preserve and present the parks’ rich historic and natural resources for the education and recreation of future generations. Visitor information is available at (231) 436-4100 or on the web at www.mackinacparks.com.