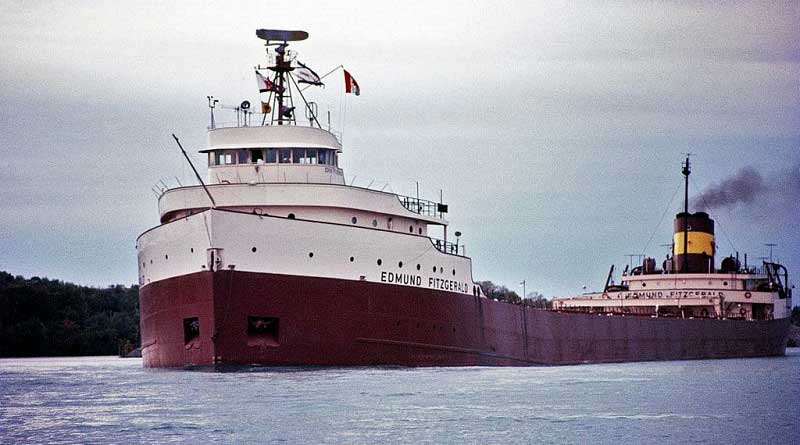 While tropical storms and hurricanes continue to attack the region in and around the Gulf of Mexico, the “Gales of November” are stirring up the Great Lakes region just as they have for centuries. This unique weather phenomenon is created when cold, dry air from northern Canada converges with moist air from the Gulf of Mexico, over the still warm summer waters of the Great Lakes.

In late October 2020, this weather pattern made an early appearance in Michigan dumping a record amount of snow in the Upper Peninsula. On Sunday, October 25, 8.3 inches fell more than doubling the previous record of 3.1 inches set on October 25, 1976. The snowfall also broke the monthly snowfall record with 19.2 inches (the previous record was 18.6 inches, set in 1979). While not a record, snowfalls were recorded throughout the Lower Peninsula on Halloween with several schools closed on Monday, November 2. Yet, in less than a week – here we are with temperatures in the low to mid 70s in the northern Lower Peninsula.

Throughout the history of the Great Lakes, November has been a prime month for shipwrecks. According to the Great Lakes Shipwreck Museum at Whitefish Point (Paradise, Lake Superior), there are over 6,000 shipwrecks throughout the five Great Lakes – with an estimated loss of 30,000 lives. More than 60 of these ships have met their demise during the month of November – the most notably, the Edmund Fitzgerald which sank on November 10, 1975.

“The legend of the Edmund Fitzgerald remains the most mysterious and controversial of all shipwreck tales heard around the Great Lakes. Her story is surpassed in books, film and media only by that of the Titanic,” according to ShipwreckMuseum.com.

The entire 29-man crew of the Fitzgerald lost their lives when it sank 17 miles north-northwest off Whitefish Point. Shortly thereafter, the Maritime Sailors’ Cathedral in downtown Detroit – which was founded in 1842 as a special mission to the maritime travelers of the Great Lakes – tolled its bell 29 times to mourn the loss of every soul on the Fitzgerald.

Every year since, the church has held a memorial on the Sunday before the anniversary date – reading the names of the crew and ringing the church bell. It’s a scene that most recall from the lyrics to Gordon Lightfoot’s 1976 ballad “The Wreck of the Edmund Fitzgerald”: “In a musty old hall in Detroit, they prayed in the Maritime Sailors’ Cathedral. The church bell chimed ’til it rang 29 times for each man on the Edmund Fitzgerald.”

Each year, on the anniversary of the Fitzgerald’s sinking, the Museum also hosts a memorial service. This year, that 45th anniversary event will be virtual – meaning around the world, people can tune in at 7pm on Tuesday, November 10 to be part of the service.

Several other significant shipwrecks are noted in Great Lakes waters during the month of November.

A great storm on November 27-28, 1905 known as the Mataafa Storm, damaged and sank several ships including the SS Mataafa. As the system moved across the Great Basin, then east-northeastward across the Great Lakes, it brough storm-force winds and heavy accumulation accompanied by the cyclone’s passage. The storm damaged 29 vessels, killed 36 seamen and generated a loss of $3.567 million ($105.5 million today). Other notable ships destroyed by this storm include the Ira H. Owen (with loss of the entire crew), George Spencer, Madeira and Lafayette.

S.S. Myron – On November 22, 1919, this ship with its crew of 18 began to sink in Lake Superior, near Whitefish Point during a storm wielding 60mph winds. It drifted southeast toward Point Iroquois Lighthouse but the ship and its crew were lost. The only survivor was the captain, who climbed in the pilot house expecting to go down with the ship – but it broke off, flipped over and ultimately was rescued in Canadian waters. The bodies of half the men were recovered that month by lighthouse keeper Elmer Byrnes. The remaining eight men weren’t found until the following spring and their bodies were buried in a mass grave inside the Mission Hill Cemetery near Brimley.

Rouse Simmons – Affectionately known as “The Christmas Tree Ship,” this three-masted schooner sank in a violent storm on November 23, 1912. She was headed from Manistique to Chicago with a cargo of 5,500 Christmas trees harvested in the Upper Peninsula when it sank off the coast of Two Rivers, WI. The entire crew of __ was killed. The legacy of this vessel, which was at one time owned by wealthy lumber magnate Charles H. Hackley of Muskegon, MI, lives on in holiday stories and books.

Carl D. Bradley – a self-unloading Great Lakes freighter was caught in a vicious storm on Lake Michigan on November 18, 1958. At 639 feet, it was the largest vessel on the Great Lakes at the time it sank. The captain and 34 crew battled for their lives and only four managed to get into a lifeboat before the Bradley slipped beneath the surface. Two of those men would later die from the frigid temperatures. The following spring, the wreckage was found at a death of more than 360 feet, five miles north of Boulder Reef, just south of Gull Island and off Northport Bay (Leelanau County, MI).

Francisco Morazan – ran aground on November 29, 1960 and became a total loss off the south shore of South Manitou Island, after running over the wreck of the bulk freighter Walter L. Frost (which sank on November 4, 1903). The ruins remain visible from the island and is a known dive site.

Six ships sank in Lake Huron waters between November 9 and 15 during the “Great Lakes Storm of 1913”. Known as the “Big Blow,” “Freshwater Fury” and “White Hurricane,” this massive blizzard with whiteout snowsqualls, 35-foot waves and 90 mph hurricane-force winds (an extratropical cyclone originated as the convergence of two major storm fronts) toppled ships on four of the five Great Lakes – particularly Lake Huron. It is noted as the deadliest and most destructive natural disaster to hit the lakes in recorded history, killing more than 250 people, destroying 19 ships and breaking up another 19 vessels. The financial hit was nearly $5 million (more than $148 million today), including valuable cargo like coal, iron ore and grain (more than 68,000 combined tons). These ships include the Isaac M. Scott, James Carruthers, Wexford, Regina, Hydrus and Charles S. Price.