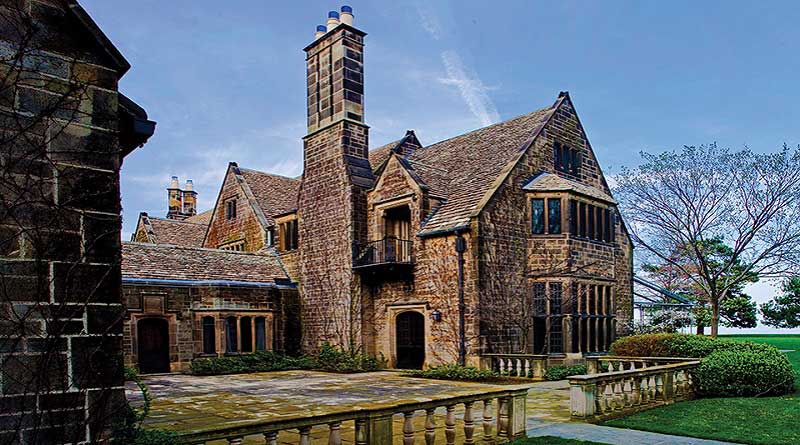 It isn’t often that a place can be regarded as opulent and intimate at the same time, but that is exactly the feeling one gets when visiting the 30,000-square-foot Ford House (fordhouse.org) along the shores of Lake St. Clair in Grosse Pointe Shores.

The former home of Edsel Ford (the only child born to Henry and Clara Ford), his wife, Eleanor (Clay) and their four children, was completed in 1928. Inspired by England’s Cotswold storybook cottages, it features sandstone exterior walls adorned with ivy, along with a limestone shingled roof.

Inside, antique wood paneling, fireplaces, staircases and stained-glass windows sourced from historic manors and halls of England date back as early as the 14th century. The Fords also amassed a priceless collection of art and antiques — some pieces later donated to the Detroit Institute of Arts, a venue they actively supported.

Over the years, the Fords entertained in grand fashion — welcoming social groups, civic leaders, and friends into their home. Even after Edsel passed away in 1943, Eleanor held lavish gatherings for the community and her family alike, such as son William Clay’s 21st birthday party when a full-size replica pirate ship was set afloat in their lagoon.

Upon her death in 1976, Eleanor left a $15 million trust to preserve and restore the property, as well as provide for a handful of staff who remained. Her wish to open the estate to the public was granted and by 1979, the Ford House was listed with the National Register of Historic Places.

“If in the Detroit area, the Ford House is a must,” said Martha Canipe of Kernersville, North Carolina, who also serves on the board of Preservation Forsyth — the country’s only organization dedicated to preserving historic resources. “Led by passionate and knowledgeable docents, you’ll leave feeling you have a much better understanding of both the home and family.”

Plan 50 minutes for a guided tour or set your own pace during a self-guided tour. In addition to the gardens and manicured grounds, the estate boasts a Gate Lodge, Pool House, Power House, and 2/3-scale Play House built for the Fords’ only daughter, Josephine. Two new buildings — an administration building and visitor center — each designed to LEED standards, will open this year.

The Ford House also hosts a variety of events and educational programs throughout the year, including a Father’s Day car show and two annual concerts with the Detroit Symphony Orchestra in July (capped off with fireworks over Lake St. Clair).

Reprinted from the summer 2020 issue of Michigan BLUE magazine.