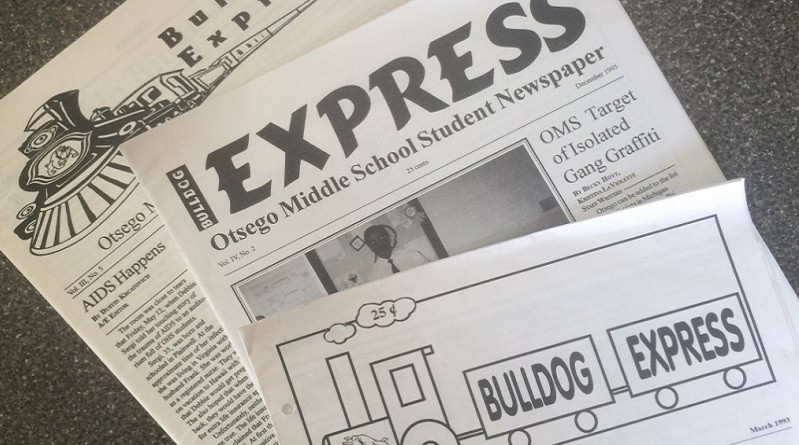 Many of you may not be aware that was I a teacher in a previous life – well, an educator I guess since I never actually received my certification to “officially” teach. I’m not sure if it is allowed today, but in the 1990s, if you had a degree in certain fields, you could still “teach” in that area. For example, a mechanic could “teach” auto shop, a chef could “teach” culinary arts, a sculptor could “teach” art. As a professional journalist—in both print and broadcast—I was given the opportunity to develop and advise a student-run newspaper program at Otsego Middle School.

I’ve been a writer since childhood. I still have my third grade journal from Gilkey Elementary School, a selection of poems written for my grandparents and reports from my middle school years.

My interest in journalism came my sophomore year at Plainwell High School. Kenny Zelnis was our teacher and advisor of the Trojan Torch. I remember leaving the very first class that year knowing what my career would be. The child of a long-time radio broadcaster, it seemed like a perfect fit. My natural curiosity, relentless communication skills and passion for writing were fueled by this specific teacher and his obvious inspiration for news.

For the next two-and-a-half years, journalism class became my #1 priority (until my senior year, when yearbook also came into play). I thrived on the research—before the internet, when we had to use the card catalog, microfilm machine and the telephone to conduct interviews and pull pieces together for articles. I looked forward to class, to telling stories, to attending conferences and entering stories in competitions through the Michigan Interscholastic Press Association (MIPA) at Michigan State University.

By my senior year, I was named News Editor of the Torch (and business manager of the Troan yearbook, where I also managed a new special “features” section). I was also working at a local weekly newspaper, typesetting copy, taking photos, covering news and writing my own column. If that weren’t enough, I also began working in broadcast news at Quixie, a local radio station (co-owned by my dad, who now owns and operates WAKV). At that year’s MIPA conference, I was honored as one of the top four student journalists in the state of Michigan.

College took me to Western Michigan University where I majored in English (with emphasis in Community Journalism) and Communications (with an emphasis in Radio Broadcasting). Here, I also finally met Cheryl Kaechele, who owned newspapers in our community from 1982 until 2015. She was teaching a couple journalism classes at Western, and I had known of her my entire life.

You see, Cheryl and her husband, Walt, graduated from Plainwell High School with my dad. Not only was she a long-time family friend, but she was active with the Michigan Press Association. Even then, I knew the value of building a solid network! I would even coordinate my academic and work schedule just to get into her classes, knowing there were key things to be learned from her.

While finishing my degrees, I continued working at local newspapers (including ones owned by Cheryl) and the radio station, and also served as copy editor of the campus paper, Western Herald. My multi-tasking skills were being perfected in those days!

I realize how fortunate I was that my skills and passion lined up back in high school. I’ve known since I was 15 what I wanted to do with my life. Although it has changed slightly in focus over the years, the bottom line is I am still a professional communicator in a variety of platforms. I have Mr. Zelnis to thank for that first introduction into the world of journalism. Had I never been in his class, where would I have landed in life? The power of a dedicated teacher is so profound. I used to joke with him that someday I’d have his job! I didn’t exactly get there, but I did get close.

After college, I landed a part-time job as the PR person for Otsego Public Schools (the neighboring, rival school district). A couple of years in, at the request of former Superintendent John Kingsnorth, I developed a non-credit elective middle school journalism program. Students were taught every aspect of the field, from ethics and writing styles, to the business of running a newspaper (including advertising, layout & design and distribution). 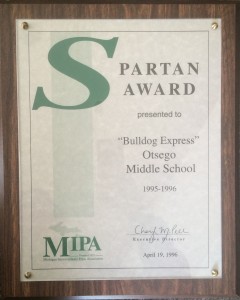 The Bulldog Express was born in March, 1993 and went on, during its four-year life, to earn several MIPA awards for individual and group projects. MIPA really hadn’t focused much on middle school programs in the past, but it was through my involvement that that changed. A board position was even created for the Middle School Chair, which I served as for a couple of years.

In April, 1996, the paper and its dedicated staff even won a coveted Spartan Award and was recognized as the #1 Middle School Student Newspaper in the state of Michigan. My students worked hard—they wrote grants to pay for equipment and desktop publishing software, they attended conferences, they gave up free time after school to work on stories, they spent their lunch hours selling papers and so much more.

That all changed during the winter of 1997!

Days before our next issue was to head to the printer, an incident on a school field trip created a last-minute editorial change to the front page. An eighth grade girl was caught shoplifting, the police were called and the following day, teachers informed students that as a result of this incident, future trips were in jeopardy. Students weren’t happy and our news editor wanted to cover the story.

With the approval of the editor-in-chief and myself, content changes were made and the reporter set out in search of the facts. A police report was received, interviews were conducted, the story was written (and since the accused was under age, her name was never reported). The article was completed, the layout was revised and we were ready to go to print.

Hearing about the pending article, the new superintendent stepped in and made an executive decision. Publishing such an article could be seen as negative for the district, and therefore the paper was forbidden to run it. In our four years of operation, this was the first case of censorship that we were faced with. We had a reputation for covering “controversial” topics in the past, so this caught us off guard as it seemed so trivial.

After an office meeting with the superintendent and principal, I informed the editorial team of this new development. I provided my editor-in-chief with a list of case studies and resources provided to me by MIPA and the Student Press Law Center. We talked about the options, the laws and the consequences. Then, I sent him home to discuss it with parents and to think about his course of action, saying that I would support whatever decision he made.

I then contacted my journalism colleagues—including Mr. Zelnis at PHS—to get advice on how to handle the situation. I knew what needed to be done, but it helped to have their support and guidance as I moved through this uncharted territory.

A couple of days later, after talking with industry leaders and officials in Lansing and Washington DC, the editor-in-chief decided that the censorship could not be allowed to happen. He decided, with me and his parents by his side, to fight for his constitutional right to free press. Calls were made to the local newspaper, who were provided the article which ran that week under the headline: “You Couldn’t Read it in The Bulldog Express, But You Can Read it Here.”

The war had begun!

The exact sequence of events is a bit hazy at this point, nearly 20 years later, but the basics are still with me. The editor-in-chief retained a pro-bono lawyer out of Grand Rapids who filed a lawsuit against the superintendent, principal and board of education for violation of his First Amendment rights.

Not only did the story hit the weekly newspapers (owned at the time by my former professor Cheryl Kaechele) but the Kalamazoo Gazette picked it up. The story went regional, with local radio and TV stations following it. WJR in Detroit and WGN in Chicago did radio interviews with the editor-in-chief. A story on the Associated Press wire lead to articles in Boston Globe, Dayton Daily News, Chicago Tribune, Patriot Ledger, Rocky Mountain News, Detroit News, Grand Rapids Press and Los Angeles Times. The Chicago Reader ran a story as well.

Printing of The Bulldog Express continued, but it had definitely changed. Now, in addition to the first case of censorship, the paper was subject to “prior review” on a multitude of levels. The editorial calendar had to pre-approved, the stories had to be pre-approved after they were typed into the computer, the final layout had to be reviewed and the principal or superintendent was responsible for delivering it to the printer (to prevent us from swapping out stories at the last minute). The job of producing the paper became much more laborious and time consuming.

Yet, subscriptions and advertising increased dramatically. If I recall correctly, we had fewer than 10 ads in that issue where the story was originally pulled. By the next month’s issue, we were over 20—including a ½ page ad from the local VFW which said something to the affect of “Thank you for supporting our constitutional rights.” The ad ran, because I don’t think the administration wanted to take on the local veterans on this one.

As the school year ended, things continued to decline. After months of being reprimanded for supporting my editorial team, I was pulled as advisor from the paper. Not being a certified teacher (and not part of the union), I had no real recourse. When the new school year started that fall, my hours (and my paycheck) were cut in half, which forced me to look elsewhere for a job. I left in November of 1997, and the paper—under new leadership—eventually folded. The lawsuit continued throughout the school year, but was eventually settled out-of-court. The editor-in-chief was heralded for his efforts by many journalist organizations and he was even recognized by the Freedom Forum in Washington DC.

Yes, we lost the battle, but I think we still won the bigger war! Granted, the paper and the journalism program didn’t survive, but the students and myself learned some valuable lessons that still play a role in our lives today. Defending your constitutional right is a big deal! Imagine doing that at the age of 13 or 14? Being a leader for students, making them think and challenge authority when appropriate are life lessons they’ll never forget. I learned those lessons in the classroom with Mr. Zelnis (although not to the extreme that my students did at OMS), but it all started with that one inspiring teacher.

About 10 years ago, when my daughter was a freshman at Plainwell High School, we stopped in to see Mr. Zelnis during fall open house. I wanted to introduce her to the teacher who helped shape my life—the teacher who inspired me, motivated me and encouraged me. The teacher who became a colleague and a friend.

With a fondness for writing herself, my daughter found herself interested in journalism and that year she became one of only two freshmen admitted into the Journalism I class that Zelnis was teaching. I remember her coming home from school a week or so into the class and I could tell she got it…she understood the impact that a great teacher can really have. Zelnis retired before she graduated, but I’m so thankful she was able to spend a brief period of time learning from him just as I did years before!

I’ve always been vocal about my role models—about those who have had such an impact on my life that even today their inspiration runs deep and is at the core of who I am as a person, a writer, a business person and a leader.