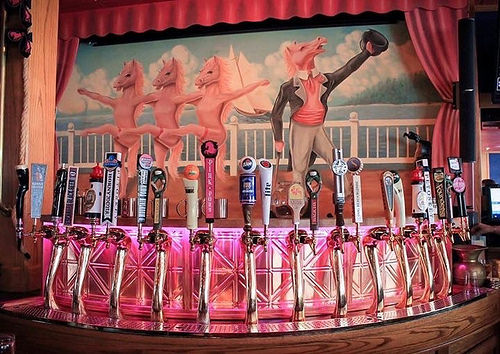 Saturday, May 7 is the legendary Kentucky Derby—the longest-running sporting event in the United States, dating back to 1875.

But what if you can’t make it to Kentucky for the festivities, but still want to watch the race and throw back a refreshing Mint Julep—the “official cocktail” of the Derby since 1938, consisting primarily of bourbon, water, shaved ice and fresh mint? Not to worry. There are plenty of horse-themed locales throughout Michigan for you to don your flashy suit, dress and hat (or not) and spectate in the “most exciting two minutes in sports.”

As a quick side note…did you know Michigan has a growing number of craft distilleries making bourbon-style whiskey that pairs well with locally-grown mint—and that in the early 1900s, 90% of the world’s mint was grown within a 90-mile radius of Kalamazoo on farms primarily owned by A.M. Todd – the “Peppermint King” of the AM Todd Company?

Michigan is currently home to two active horse race tracks, both located in southeastern part of the state.

Of course, when it comes to horses – no place in Michigan does it better than Mackinac Island. There are countless locations here that pay tribute to the equestrian lifestyle…and many are offering viewing parties on Derby Day.

Interesting enough, the Grand Rapids area also has several horse-themed eateries and bars worth checking out on Derby Day (or any other day for that matter).

Other horse-themed / horse-named places of interest around Michigan include:

Finally, a few other horse-themed places worth checking out: