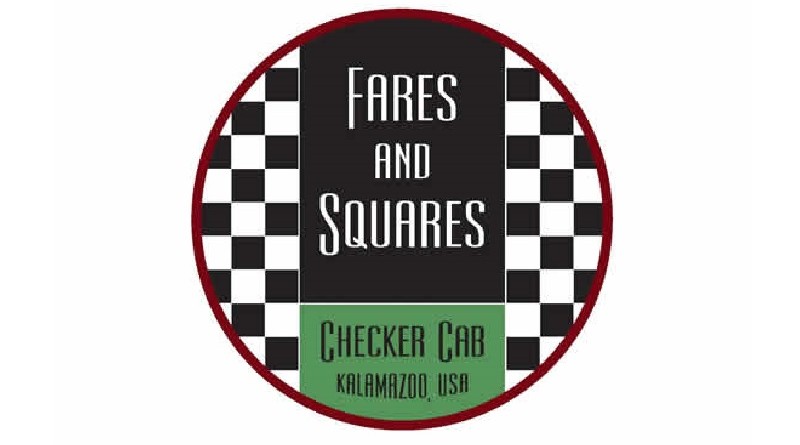 A new exhibit, Fares and Squares: The History of Checker Motors, is on display through August 21, 2016 at the Kalamazoo Valley Museum in downtown Kalamazoo. The exhibit explores the company’s history and features a 1923 taxi on loan from the Gilmore Car Museum. 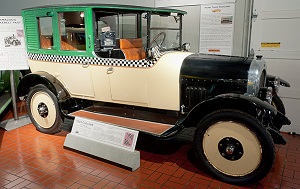 For six decades, Checker cabs, with their iconic black and white checkered detailing, were synonymous with taxi service in America’s cities, and those cabs were built right here in Kalamazoo.  This exhibit explores the company’s history and features a 1923 taxi. 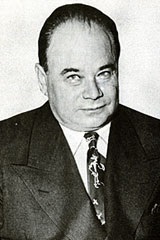 A native of Smolensk, Russia, Morris Markin immigrated to the United States at the age of 19, arriving at Ellis Island in 1912 with only $1.65 in his pocket. Settling in Chicago, he worked for his uncle as a delivery boy, and within six years, he and his brother opened their own tailor shop.

By 1919, Markin ventured into the taxi business by taking over the operations of a Chicago cab fleet. Around the same time, he opened a body plant called Markin Body Co. that produced cab bodies. Three years later, Markin purchased a chassis company in Joliet, Illinois. In May of 1922, these businesses were merged into the Checker Cab Manufacturing Company and Markin began looking for a new site to produce his taxi cabs. Kalamazoo had the available structures that a startup automotive manufacturer needed to get the business growing. Markin purchased two recently-vacated automobile plants, the former Dort Body plant and the Handley-Knight plant, both located on Pitcher Street.

In 1929, an expansion of the plant was required in order to keep up with demand. Well-known architect Albert Kahn, famous for designing automobile plants in Detroit, was hired to design the new assembly buildings for the Pitcher Street plants. At the company’s peak, over 100 vehicles a day and 5,000 a year rolled off the line. The company had an agreement with a number of cab operators who used Checker cabs exclusively. These operators were Checker subsidiaries and included the Checker Cab Company, Yellow Cab and the Parmalee Transportation Company.

During WWII, Checker produced a number of products for the war effort, including self-contained trailers, water tanks, bomb release racks, and tank retrieval and tank recovery vehicles. During the war, cab drivers had to make do with the existing stock of Checker cabs, and stories of pre-war-built Checkers lasting for over a million miles helped build the company’s reputation for size, comfort, reliability, and durability. 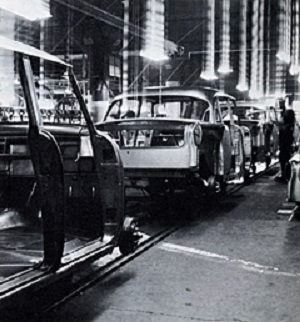 When the company resumed peacetime production, it introduced the A series cabs, most notably the A8, which was the standard Checker cab from 1958 until 1982. By 1965, over a quarter of the nation’s cabs were Checker-built. The popularity of the Checker cab led the company to experiment with vehicles for the consumer market. Beginning in 1959, Checker produced the A10 Superba line of sedans and station wagons in addition to its taxi cabs. Advertising literature promoted the Checker’s “reliability, roomy interior, and value for the family.” In 1961, the Superba was renamed the A12 Marathon.

The consumer market eventually accounted for 20 percent of Checker’s production. Checker also experimented with other vehicles such as the Medicar ambulance for wheelchair-bound patients and the Aerobus, a limousine that seated as many as 12 passengers.

Checker was the most successful automobile manufacturer in Kalamazoo’s history and produced one of its best-known products. In major cities across the country, in film and in song, Checker cabs became the icon with which taxi service was identified.

Checker’s decline began in the mid-1970s, when the very features that contributed to the company’s success now worked against it. Sturdy steel chassis and big bodies made for a durable, roomy cab but contributed to a vehicle weight of nearly 4,000 pounds. The weight made Checkers “gas guzzlers,” and after the oil embargo of 1973 drove up fuel prices, it became difficult for the company to meet federal gas-mileage standards.

In 1982, the last Checker cab rolled off the assembly line at the Kalamazoo plant. However, the company remained in business producing parts such as doors for vans, fenders, deck lids, roofs, frame rails, pickup boxes, and GMC truck parts. Checker also built parts for Ford Motor Co., Chrysler, and Navistar Trucks, and did metal work for companies outside the auto industry, making items as varied as parts for stadium seating and kitchen sinks. The economic downturn and near-collapse of the auto industry in 2008 proved to be too much. The company declared bankruptcy, sold its contracts and machinery, and went out of business at the end of June 2009.