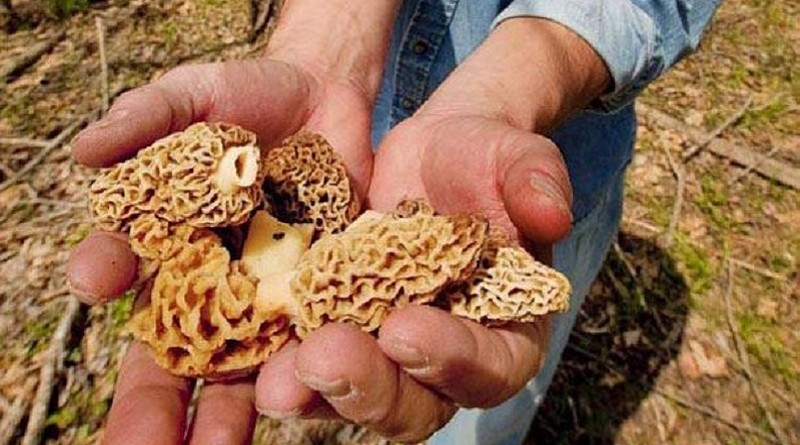 When you live in Pure Michigan, the spring season means the return of golf, fishing, biking and hunting—not necessarily for animals, but for wild edibles such as morels, asparagus, fiddleheads, leeks (also known as ramps) and more. Early- to mid-May is the typical timeframe for these spring edibles, although Mother Nature makes the final determination.

As winter succumbs to spring and the snow melts away, an amazing growth begins to take place on forest floors across Michigan. The moist ground is warmed by the sunshine and sprouts begin to push up through the dirt and dead leaves, alongside fallen Elm, Ash, Poplar, Aspen and Maple trees.

There are three common varieties of morels found throughout Michigan. Black morels usually appear in late April and make a three-week appearance, before the white and yellow morels come in for their run in May (of course, all are weather dependent).

Camouflaged by the fallen leaves from the previous autumn, morels are not easy to spot. It takes a trained eye to catch them peeking out from beneath the groundcover. However, after you spot one…it becomes easier to find the others (much like searching for Petoskey Stones along the Lake Michigan shoreline – your eyes are just drawn to them).

There is a system – or rules one would say – to the actual act of harvesting and cleaning morels.

Morels make a great addition to hollandaise sauce atop Eggs Benedict or folded into an omelet. Stems, or the less-than-perfect morels, can be cooked into a delicious creamy bisque. Of course, dipping morels in an egg-wash and flour and frying them into a salty, crispy treat is also a favorite recipe. Consider an aioli dipping sauce – made with eggs, Dijon mustard, olive oil, white vinegar and lemon – to compliment them. 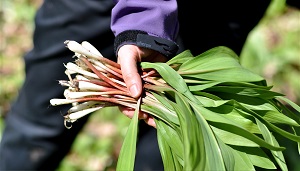 Often where there are morels, there are other wild edibles – such as wild leeks – or ramps as they’re often referred to. A member of the lily family (just like the asparagus), ramps carpet the forest floor with their sweet garlic-onion scent between April and June.

The plant itself is green, with two or three elongated smooth leaves – almost feather-like in appearance – with a burgundy tone to the stem. Earlier in the season, the bulbs of the ramps are more slender and as they grow and mature, they become more bulbous.

There are a few differences in foraging for ramps, including:

Hunting for ramps on state and federal grounds is legally off limits and there are fines and penalties enforced on those who do.

When digging ramps, be sure to go all the way down to the root and harvest the entire plant. It’s often easier to use a small shovel or scoop shovel to guarantee a clean harvest.

Use a plastic bag to transport ramps, as they can fall through the mesh bags used to gather morels.

All parts of the ramp can be used in recipes. The tender fresh spring leaves can be used in salads, quiche and omelets. Ramps make a great base for pesto, combined with olive oil, kosher salt, pine nuts and parmesan cheese. Blend ramps with vinegar for dressings, marinades and sauces. Ramps can be eaten raw, grilled, roasted or sautéed, but remember they have a strong flavor – much more intense than scallions – and should be used more sparingly. 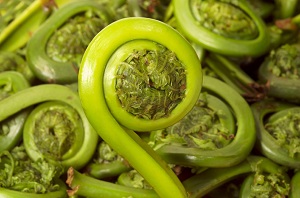 Fiddlehead greens are the premium – and lesser known – wild forage vegetable of spring. Their appearance coincides with that of wild morels and ramps. The fiddlehead resembles the curled ornamentation of a stringed instrument (such as a fiddle) and thus the name.

They should be harvested early in the season, before the frond has opened because once they open and start to grow, they become inedible. Look for a tight, dark green coil and snip it off, with scissors, just an inch or two down the stem beyond the coil.

Boasting a deliciously intense flavor, fiddleheads are reminiscent of asparagus, with an added nutty-bite. The flavor of fiddleheads goes well with cheeses, tomato sauce and oriental cuisine. They’re excellent with Hollandaise sauce or marinated in oil and vinegar. Cooked to crunchy tenderness, like fried morels, they are a flavorful and versatile treat. Sautéed with garlic and bacon (everything’s better with a little pork fat) they develop a more complex flavor and make a decadent side-dish. 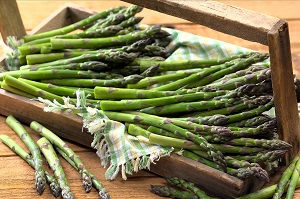 Asparagus is another widely-popular spring edible. In addition to sprouting wild, it’s also grown on farms across West Michigan – particularly along the shoreline where the sandy soil provides ideal growing conditions.

In fact, Michigan is the #3 producing asparagus state in the country – producing up to 25 million pounds annually on approximately 11,000 acres. Only 25% of the harvest is sold fresh at retail outlets and roadside markets; most is sold to processors to be frozen or canned. Oceana County itself is known as the “Asparagus Capital of the World.” This region is even featured in the award-winning PBS documentary called “Asparagus: Stalking the American Life.”

Other wild spring edibles worth researching include the long spiky leaves of Stinging Nettles – comparable to spinach or wheat grass, great for soups, purees or even pasta and dandelions – a bitter weed that can be cooked like greens, used in raw salads, added to oil and vinegar for dressings or turned into beverages such as tea or even wine.

If you have trouble finding wild edibles yourself, check out the Michigan-based Earthy Delights. As America’s premier supplier of specialty foods, they’re the leaders in offering wild-harvested and hand-crafted foods from small harvesters and growers. Their website also includes a wealth of recipes which inspire beginner foodies to gourmet chefs.

Once the harvest is complete (or after you’ve received your shipment from Earthy.com), it’s time to head to the kitchen to whip up an impressive gourmet menu fit for a five-diamond restaurant.

For specific recipes, look to local chefs for inspiration.