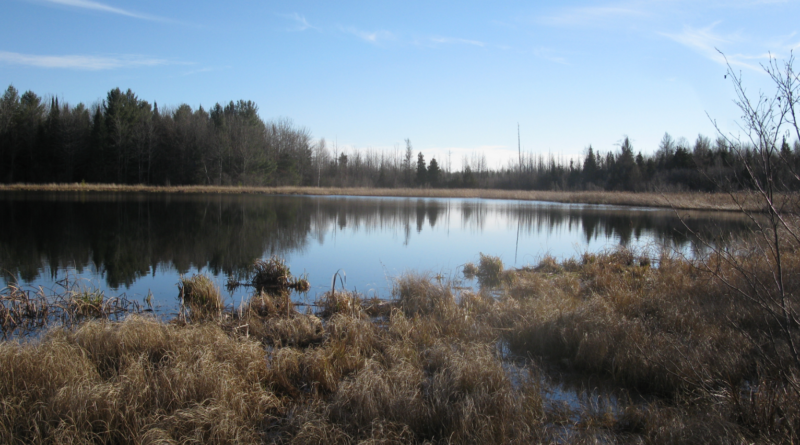 No matter how it is written* the underlying message implied by the name is the same—a man most likely met his end at or in a lake named ‘Deadman Lake’.  There are over 25 such named lakes in the USA to be found in at least 12 States. Perhaps Michigan, at six, has the most Deadman Lakes of any State. This article comes about upon visiting and seeking out the ‘story’ behind the naming of the six Michigan Deadman Lakes.

The naming of three Deadman Lakes seems to have been lost in history:

Deadman Lake in Gogebic County has a story. According to local historian Bob Zelinski, a railroad section crew working on the Choate Branch of the Chicago & Northwestern Railroad observed a man, possibly a bum, with his back against a tree as if sleeping at the east end of Deadman Lake close to the railway. On returning from their work area, the section crew observed the man to be in the same position as when he was first observed. In checking out the situation, the man was found to be deceased.

The Iron County Deadman Lake has a story documented in a 1973 newspaper article of The Independent by Arlene Shovald. In 1882, railroad surveyors found a dead man lying near the shore of an unnamed lake. They buried the body by the shore of the lake alongside the railroad grade and the lake became known as Deadman Lake. Section crews maintained the grave throughout the years.  John Drozdowski and Leonard Wickman, railroad men, participated for many years in maintaining the grave site and provided information for the newspaper article. Today, 135 years later, the grave site still exists and is still being maintained, although the white wooden cross of 1973 has been replaced with a smaller plain wooden cross.

In Clare County, Deadman Lake is located just over two miles west of Farwell. The story of its naming is well documented in the 1878 Clare County Circuit Court legal case of People v Joseph W.  Andre and Joseph McCane. The night of January 7-8, 1877 was cold and possibly snowy when Owen Feeney met his fate. He had been kicked off the westbound Flint & Pere Marquette Railroad train at Farwell sometime after 7:00 PM because of his intoxicated condition. He then proceeded to begin to walk on the railroad grade 11 miles to Chippewa Station, but only got about two miles west of Farwell. His body, which had been placed into a mostly frozen small lake that evening by the perpetrator(s), floated to the surface of the lake at its south end nine months later, in September of 1877. Henry M.  Daggett and his son discovered the body while fishing in a canoe. A Justice of the Peace inquest was held with six “jurors” at the lake and the “jury” determined that Feeney’s throat had been cut. The perpetrator(s) had apparently pushed the body under the ice of the lake at a location near the north end of the lake about one-quarter mile from the railroad grade where a small area of the lake had not as yet frozen over.

On January 8, 1878, exactly one year after Owen Feeney’s demise, two local men—Joseph W. Andre and Joseph McCane—were charged with the murder of Feeney. The charge against Andre was dismissed following a preliminary examination, and the charge against McCane was later dismissed on a prosecutorial request claiming lack of evidence. Twenty- three years following the homicide, on Christmas night in 1900, Henry Green walked into a police station in Sacramento, California, and orally confessed to the murder of “Bill” Feeney.  Shortly thereafter he recanted his oral confession claiming to have been under the influence of cocaine. In the absence of a written confession, the Clare County Board of Supervisors refused to spend the money for extradition to Michigan.

Numerous ‘historical’ embellishments came about in the following years—a scarf with the initials PCA was around Feeney’s neck, a chain held his body down in the water, he had been shot, his skull was fractured, etc. Of course, the lake which did not previously have a name became known as Deadman Lake.

As an aside, Michigan also has three (and possibly more) Deadman Hills:

There are also at least two Dead Lakes in Michigan—one in Washtenaw County and one in Alger County. Deadman Farm in Luce County is located in the Tahquamenon swamp at a high spot. The story is that at a time following the logging era a trapper-farmer was murdered on the theft of his furs at this isolated area. And, at a Clare County road intersection there is a Deadman’s Corners.

* All variations will be “Deadman” in this article.

Jon H. Ringelberg, a lawyer and a former Clare-Gladwin County District Court Judge, has synopsized over 2,500 Clare County Circuit Court legal cases from 1871 through 1920 with each synopsis providing dates, names, locations and events as found in the paperwork of the case files.

Visit the 6 Deadman Lakes in Michigan:

Kalkaska County: From M-72 travel north on Bear Lake Road 5.5 miles; at middle of Section 29 take two-track to southeast approximately 2/3rd mile; Deadman Lake is on the north side of the two-track.

Alger County: From M-77 travel west on Adams Trail Road (Co 637) about 1.5 miles; Deadman Lake is on the north side of Adams Trail Road; there may not be a public access.

Iron County: From Highway 2 about 9 miles south of Crystal Falls go northwest on Stager Lake Road to  Stager Lake Township Park – walk west about 200 feet to the railroad grade and hike on grade State Line to the southeast about 2/3 mile to Deadman Lake and the memorial on the south side of the grade.

Luce County: From McMillan travel north on Co 145 7 miles to Co 421, turn west and go approximately 1/2 mile; Deadman Lake is on the south side of Co 421; there may not be a public access.