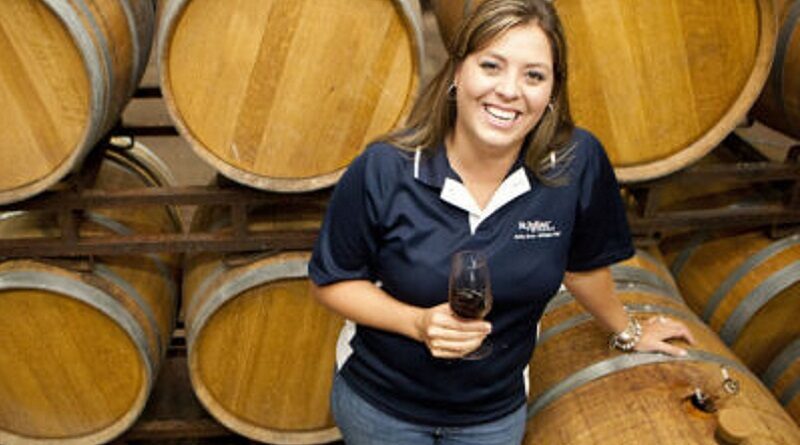 Nancie Oxley,  Vice President-Winemaking at Michigan’s St. Julian Winery, has been named to the 2019 Class of “40 Under 40” from Fruit Growers News and Vegetable Growers News magazines, headquartered in Sparta, Michigan. The Class of 2019 will be honored at the Great Lakes Fruit, Vegetable and Farm Market EXPO in Grand Rapids on Tuesday, December 10 and featured in the October 2019 issue of both publications.

Launched last year, the 40 Under 40 Awards represent a broad spectrum of agriculture industry professionals, from growers and farm market operators to Extension agents and industry suppliers. These agricultural professionals are making substantial strides for their businesses and the industry as a whole.

“Our Fruit + Vegetable 40 Under 40 Class of 2019 represents the future of our industry, and its clearly in good hands,” says CEO and Publisher Matt McCallum. “In their young careers, these honorees are already making a positive impact while also demonstrating exceptional leadership, motivation, and innovation.”

For more than 50 years, the award-winning Fruit Growers News and Vegetable Growers News magazines have served as a powerful and reliable resource for vegetable growers across the nation. Each issue features the latest news, insights, products, and more to ensure successful growing operations.

“I am honored to have been selected by these esteemed industry publications as part of their second year of leadership awards,” says Oxley, who is recognized as the first professional commercial female winemaker in Michigan. “To be named part of this class with 39 other individuals from around the country means a great deal to me and reinforces the work that I’ve been doing here at St. Julian to keep our long-standing company relevant in the ever-changing wine industry in Michigan and beyond.”

Oxley has been with St. Julian for more than 17 years, starting as a lab manager and enologist, and quickly moved up the ranks to Assistant Winemaker in 2003 and Associate Winemaker in 2008. She was promoted to head winemaker in 2010, was named to the board of the Michigan Wine Producers Association in 2015 and two years later was named Vice President-Winemaking  at St. Julian.

As part of Purdue’s grape and wine research program at Purdue, Oxley assisted Emeritus Professor of Enology Dr. Richard Vine in making wine. Oxley has also helped coordinate the Indy International Wine Competition held at Purdue, completed an internship with Geyser Peak Winery in California, and under the tutelage of winemaker Daryl Groom, was active in Perdue’s chapters of the Institute of Food Technologists and the American Wine Society.

In 2002, she received Bachelor of Science in Food Manufacturing Operations and double minors in Agribusiness Management and Organizational Leadership & Supervision. While at Purdue, Oxley was a member of several organizations, including Kappa Alpha Theta, Institute of Food Technologists and the American Wine Society. She earned a Master of Science degree in Food and Agribusiness Management from Purdue University-Indiana University in West Lafayette, IN, in 2010 with the MBA portion of her degree completed at the Indiana University’s Kelley School of Business.

Over the past decade and a half, Oxley has produced new wine styles, collaborated with growers, managed quality assurance and food safety efforts, supervised wine cellar staff and operations, and developed marketing information. Since she joined the winemaking team, St. Julian wines have won more than 200 “Best of Class” and “Double Gold” awards.

Earlier this year, Oxley was honored with the Purdue University 2019 Distinguished Agriculture Alumni Award, the College of Agriculture’s top honor, and in 2013 she received the University’s “Outstanding Food Science Award.”