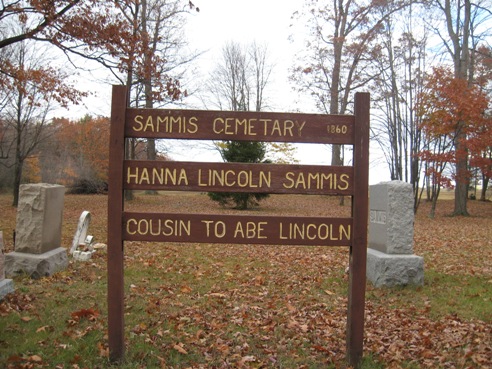 I was immediately intrigued, given that Lincoln has always been my favorite President, and started digging in to uncover the exact family connection.

A Google search led me to the Muskegon County Genealogical Society website, which provided more background into Hannah and Henry’s relationship (courtesy of the White Lake Area Historical Society):

“On the fourth of July in 1849, Henry G. Sammis married Hannah Lincoln at Martha’s Vineyard, living in Macomb Co., New Nork for the next 13 years [the 1850 New York Census notes the 22-year-old couple living with a David and Elizabeth Chase in Wyoming County]. They then journeyed to Montague in a covered wagon and finally purchased 40 acres in Section 20 in Montague Township from R. L. Harmon for $300. He [Henry] built a log cabin and later a modern home of that day. Sammis worked in Albert Mears’ store in Whitehall. Hannah was born in Bethel, Vermont May 13, 1828. After living 13 years in New York, she lived 47 years in Montague in her homes on Eilers Road across from the Sammis Cemetery. Hannah Lincoln Sammis was admired and loved by everyone who knew her. She lived 20 years after her husband passed away, her death being September 4, 1915, well past 87 years old.”

Henry and Hannah had three children: Lucia (1849-1918), who was married to Louis M. Phelps; Walter Frank Sammis (1860-1890), who married a woman named Emma Estella Covert; and Fannie Belle (1862-1938) who was married to Charles M. Potter (parents of Charles Potter and Ruth (Potter) Backus, wife of James). Henry and Hannah also raised two other children including Eddie F Wadleigh (1872-1894), son of Mr. and Mrs. Edward Wadleigh and nephew of Honorable Hiram E. Staples. The name of the other adopted child was not found in online searches.

On page 150 of the “History of Muskegon County Michigan with Illustrations and Biographical Sketches of Some of its Prominent Men and Pioneers” (Chicago: H. R. Page & Co., 1882) a short paragraph about Henry reads:

“Henry G. Sammis was born in Goshen, Litchfield Co., Conn., in 1827, and in 1940 his parents removed to Warsaw, Wyoming Co., N.Y. In 1854 he went to Macomb Co., Mich., and removed thence in 1867 to Montague. In 1849 he married Miss Hannah Lincoln of Warsaw, N.Y., by whom he has three children. In 1862 he enlisted and served three years, to the close of the war, and although in eighteen general engagements, escaped unhurt. Mr. Sammis farm is on section 20.”

Henry died October 23, 1894 and was noted “one of God’s Noblemen, a very good citizen.” An obituary in The Montague Observer on October 25, 1894 stated: “The people of Montague and vicinity were pained to hear of the sudden demise of Henry Sammis which occurred Monday night. Only a few days previous he was downtown. His funeral was held yesterday afternoon. The deepest sympathy is felt for the family of the deceased, who are so unexpected subjected to such sorrow.”

Hannah lived nearly 20 more years in the Montague area before she passed away.

A 1915 obituary read: “The funeral of Mrs. Hannah Sammais (sic), who died recently at the home of her daughter, Mrs. Charles Henry Potter, 56 Irwin street, after an illness of six months, was held Monday. Mrs. Sammais was born in Vermont, 87 years ago. Her maiden name was Hannah Lincoln. In 1867 she married Henry Sammais in New York city. The following year they came to Montague were Mr. Sammais died 22 years ago. Mrs. Sammais has made her home here for 47 years. She leaves two daughters, Mrs. L. M. Phelps of Montague and Mrs. Potter at whose home she died. Six grandchildren and one great grandchild also survive. The body was interred in the Montague cemetery.”

A more-lengthy obituary was published in on September 9, 1915 in The Montague Observer under the headline Lived a Long Life.

“After an illness of several weeks, Mrs. Hannah Sammis died at the home of her daughter Mrs. Chas. Potter in Muskegon, Saturday, September 4. 1915, at the advanced age of 87 years, 3 months, and 21 days. She had been remarkably active for one so old up to the time she was first taken ill last spring. Hannah Lincoln was born in Bethel, Vermont, May 13th, 1828. She was married to Henry Sammis, July 4, 1949. Shortly after that they moved to Michigan After 13 years residence in Macomb in New York State, they came to this locality where she lived for 47 years previous to her death. To their home three children were born; Walter F. who died in New Orleans about 15 years ago; Mrs. F.B. Potter of Muskegon, and Mrs. L.M. Phelps of Montague. Her husband died 22 years ago, since which time she had lived a widow. She was of a genial, hopeful disposition, always bright and cheerful. She was loved and respected by all who came to know her. Besides her two daughters, she leaves six grandchildren, one sister and many friends. The funeral services were held at her old home, Monday, Sept. 6th, 1915, Rev. N. P. Brown, officiating. The house was filled with her friends and neighbors, who will greatly miss her pleasant and sunny ways. There were many beautiful flowers, brough (sic) as tributes of the regard and effection (sic) in which she was held. The remains were laid to rest in the little cemetery across from her home.”

Records indicate that in 1860 a cemetery was established in Montague Township known at the time as the Harmon Cemetery, as it was originally located on land owned by R. L. Harmon (some also call it the Eilers Cemetery, as it is on Eilers Road). Although it isn’t known exactly when the name was changed to Sammis Cemetery (as many members of the Sammis family are buried here), a marker was erected in 1977 which reads:

This cemetery is now owned and maintained by Montague Township.

The first public reference of the President Lincoln connection to Hannah Lincoln Sammis appeared on page 21 in the June 30, 1976 issue of The White Lake Observer in an article written by Eleanor Seaman (including the only photograph of Hannah that I’ve found). The story references a then 100-year-old recipe for suet pudding given by Hannah Lincoln Sammis to her granddaughter Ruth P. (Potter) Backus of Montague (which was printed in the cookbook on page 217). In that same paragraph it states: “Mrs. Sammis’ was a second or third cousin to President Abraham Lincoln.” However, there was no attribution as to where the information came from or who Eleanor’s source was (and unfortunately, she passed away in 2018 so asking her for further information is not an option).

Kurt Weber, a member of the White Lake Area Historical Society, provided a wealth of information about Hannah and the Sammis Cemetery, including references to several articles from the White Lake Observer. He noted that several other resources may be available through the Hackley Public Library in downtown Muskegon.

In ongoing research on FamilySearch.org and Ancestry.com shows several Hannahs and Abrahams mixed into both family trees…yet the dates don’t correlate to an actual connection. So, are they in fact cousins? Clearly, Abe and Hannah are not first cousins as the city website indicates and even a relationship as close as second or third cousins is unlikely.

An email from Ralph Lincoln, an 11th generation Lincoln who shares the same great grandfather as Abraham Lincoln (a third cousin of the former President) noted that since Lincoln’s father, Thomas, had only two brothers that a second cousin connection was also not possible. “Would need time to research out on this end. If there is a connection,” he respectfully said.

Maybe I was missing something? To aid in my search, I continued to reach out to established historians with ties to the former president’s family.

Roger Norton, a noted Lincoln researcher, said via email “My interest has always been in Abraham Lincoln’s life itself, and I do not work in Lincoln genealogy. However, I know a highly respected expert who loves helping folks and he is phenomenal when it comes to this kind of research. His name is Steve [Williams] and I will forward your message to him.”

Steve Williams also replied to an email request for information. “I’ve looked over the links you sent, including the FindAGrave page for Hannah. I’ve also used this info to look up census and Michigan death records for Hannah and her siblings, father and stepmother. FindAGrave information is user-generated but the records confirm that Hannah’s parents were Hezekiah and Sally. Though, they seem to differ in indicating Hannah was born in New York State, shortly after her family moved there from Vermont, not when they still lived there. I’m not knowledgeable in all of the intricacies of the extended A. Lincoln tree. Abraham’s father Thomas was born in Virginia c. 1776, his grandfather Abraham was born in Pennsylvania, and his great grandfather John was born in New Jersey. If Hanna and Abe were related, it seems to me that it likely would be a pretty distant relationship.” In a subsequent email, Steve noted “this tree [from FamilySearch.org] doesn’t’ have any information on its sources at all, so I have no idea about its accuracy. I haven’t a clue on any of the other preceding generations but am always cautious regarding colonial genealogies. I’ve read the at the most knowledgeable researcher into the Lincoln genealogy is Paul Verduin, the founder of the Abraham Lincoln Institute.”

While I couldn’t find an email to reach out to Paul, I did track down one of the institute’s board members, Jonathan W. White, PhD. He wasn’t familiar with the family history but directed me to both the Abraham Lincoln Presidential Library & Museum and the Lincoln Financial Collection.

Reaching out via Facebook messenger at least yielded a response from The Abraham Lincoln Presidential Library & Museum in Springfield, IL which replied with “we weren’t able to confirm a connect [from Hannah] to Lincoln. It’s possible that she was a more distant cousin who would not show up in the records without extensive research.”

A researcher with the Lincoln Connection (an internationally-known collection of Lincolniana and related materials including thousands of objects, 19th-century photographs, books, documents and art related to Abraham Lincoln at LincolnCollection.org) garnered a similar response: “I’ve been digging through quite a few family genealogical charts. I’ve been looking for Hannah (Lincoln) Sammis and a connection to Lincoln. As far as I can tell, I can’t find a connection. I’m going to pass this request along to one of our top genealogists to see if they can find a connection. I’ve included one of the full genealogy trees for Lincoln’s family back to the 1620s.”

So, after nearly a month of exhaustive online research, as well as countless emails back and forth between local and national historical organizations, I have yet to find just HOW (or even IF) Hannah Lincoln Sammis and President Abraham Lincoln are related.

If YOU have legitimate documentation, PLEASE let me know. I’d love to know the actual connection and will update my post accordingly.

Check out this article from Shoreline Media about this historical research project:
White Lake’s connection to famous president may be an urban legend