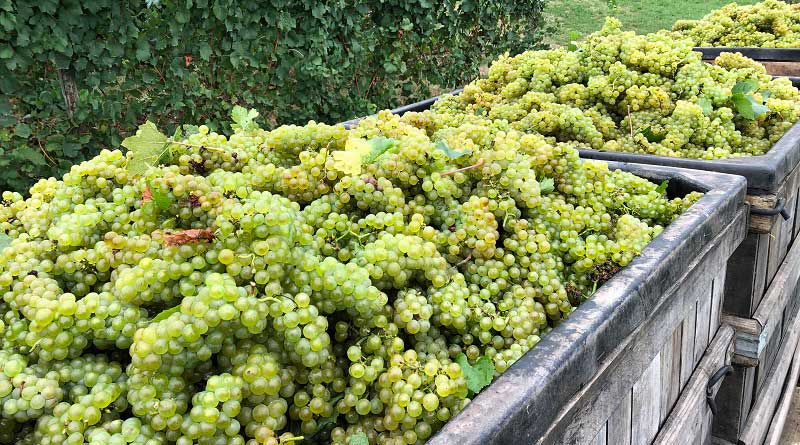 Some people are born to lead a particular life, and if we are lucky, we reap the rewards from their passions. Italian-born Mariano Meconi was destined to be a vintner, planting a legacy that remains rooted in West Michigan now for four generations.

He immigrated to Windsor, Canada as a teenager and in 1921, at age 26, he founded Border City Wine Cellars (renamed Meconi Wine Company). At the time, prohibition had Michigan and the United States in its grip, but as soon as the 18th Amendment was ratified, Mariano turned his ambitions first to Detroit (1934) and ultimately to Paw Paw (1936).

This “fruit belt” region was already ripe with a handful of grape growers and wineries (now long gone), and within a couple years the Michigan Wine Institute was founded to represent the industry’s collective interests hosting what has become the “Wine & Harvest Festival” each September.

Mariano (and his wife, Avelia) raised their children and grew the family business into The Italian Wine Company which in 1941 became St. Julian Winery – named after the patron saint of Faleria, Meconi’s birth village. Over time the Meconi children – Robert, Julia (along with her husband, Apollo “Paul” Braganini) and Eugene – each contributed to the winery in their own respective ways.

Inspired by both his grandfather and his mother, a young David Braganini stepped into the family business after graduating from college in 1973. Controlling interest of the winery transitioned to the Braganini family 10 years later and David was named president. It was under his management that St. Julian became a foundation on which Michigan’s current wine industry took shape.

Michigan’s first and subsequently largest American Viticultural Area (AVA) named “Lake Michigan Shore” was established in 1983, even though vineyards have been part of the rural landscape here since the 1860s. To tap into a growing interest in winery tourism, David and his fellow winemakers founded the Lake Michigan Shore Wine Trail in 2001, today featuring nearly 20 wineries and tasting rooms within a five-county area.

In 2002, St. Julian made history by hiring the first female winemaker in Michigan. Nancie (Corum) Oxley began as a lab manager and enologist, making her way to Vice President of Winemaking in 2017. She has significantly expanded St. Julian’s portfolio, both in terms of quantity and style, racking up more than 200 “Best of Class” and “Double Gold” awards from some of the nation’s most esteemed competitions. St. Julian is regarded as Michigan’s most award-winning winery, with an array of wines, sparkling juices, ciders and distilled spirits (as the state’s oldest-operating craft distillery since 1996).

Following David’s death in 2016, his brother, John, was named company president with wife Sarah working in administration and sons Apollo and Dario serving as vice president of sales and outstate distribution, respectively. John has since acquired controlling ownership and restructured the company for growth and expansion.

St. Julian is a third of the way through a 10-year renovation of its Paw Paw production facility which will provide the capacity and capability to compete in every aspect of the industry and support growth goals of 10 percent annually.

“As we complete this process, we will continue to advance our direct-to-consumer activities – including our nearly 15,000-member Wine Club, grow our wholesale business and develop ancillary services like bulk wine, juice, private label and co-pack services for smaller wineries wanting to expand their offerings,” says John.

In addition to its St. Julian, Braganini Reserve and Coastline brands, the company is also expanding distribution of its Forbidden Fruits Ciders and distilled spirits. John and Sarah also own and operate the winery’s Mountain Road estate vineyard in Coloma, where seven vinifera varietals are grown for small premium batch offerings.

St. Julian produced over 800,000 gallons of its own products in 2020, available at small mom-and-pop shops and larger accounts throughout Michigan and five other states, as well as through their tasting rooms in Paw Paw, Dundee, Frankenmuth, Troy, Rockford and Union Pier.

“Some of my earliest childhood memories include being here at the winery with my grandfather,” John reminisces. “To be able to lead this company with my wife and children is a privilege and an honor.”