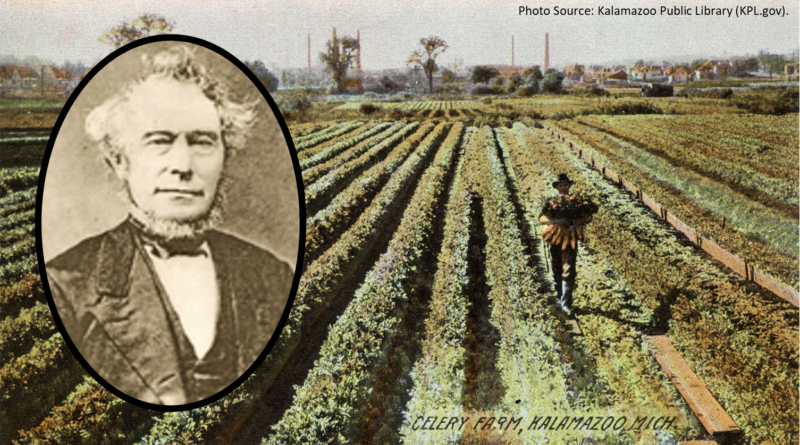 Celery is an integral part of the Thanksgiving feast…as one of the main ingredients in homemade stuffing (or dressing, if you prefer).

Stuffing/dressing itself appears to have been part of the traditional turkey day meal with written records dating back to the mid-1830s and including such things as rice, vegetables, apples, herbs, nuts, chestnuts and even chopped animal liver or brain. In fact, according to History Channel (History.com), ingredients for dressing/stuffing are often regionalized and based on what was found in local agriculture (and aquaculture) and cuisine (i.e. cornbread stuffing in the south, oyster stuffing along the eastern seaboard and Pacific Northwest).

Now, back to celery…specifically, MICHIGAN celery. According to the Michigan Ag Council website at MichiganGrown.com, Michigan currently ranks second in the nation in celery production and in 2018, harvested 110 million pounds generating $19.5 million.

But how did celery get to Michigan specifically?

In 1855, a 53-year-old horticulturalist and nurseryman from Scotland named George Taylor emigrated to Kalamazoo, Michigan where his brothers had already taken up residency. Putting his gardening skills to use, he started a local business and imported many plants and trees from his homeland – including celery seeds. A year later, Taylor determined that the mucky, dense, fertile soil (which some referred to as swampland) was ideal for cultivating celery and with that he introduced commercial celery farming not only to Michigan but to the United States.

Soon, dozens of farms on hundreds of acres sprouted up around Kalamazoo County, which had been established in 1831 (including present day Portage, established in 1963). It makes sense as to how Kalamazoo was dubbed “Celery City” with an historical marker erected in 1959 at Crosstown Parkway and Park Streets just south of downtown. Meanwhile, Portage is home to the Celery Flats Interpretive Area, with its exhibits and archives about this early agricultural industry. Taylor even introduced this crunchy vegetable to the chefs at the Burdick Hotel (today, the Radisson Plaza Hotel in downtown Kalamazoo) and it became part of dishes on the menu – perhaps even dressing to be paired with turkey?

In those early years, celery was considered a rare and luxurious delicacy by the “rich and famous” of the Victorian era. In fact, it was served to the first-class guests aboard the Titanic. To these high fancy highfalutin folks, celery wasn’t a mere side dish – it was THE centerpiece of the dinner table (well figuratively) and was served in beautiful crystal vases which were filled with ice water for the stalks to stand in – allowing them to retain their crispness.

I first learned about the early high-class value of celery while touring Henderson Castle on West Main Street in Kalamazoo. Completed in 1895 by Frank Henderson for his wife, Mary, the massive 11,000-square-feet Queen Anne style home sits on three acres and today operates as a bed-and-breakfast and French restaurant.

So the next time you have celery, whether it is in your Thanksgiving stuffing/dressing or any other way…please give thanks to my family for bringing it to America and specifically, to Pure Michigan!