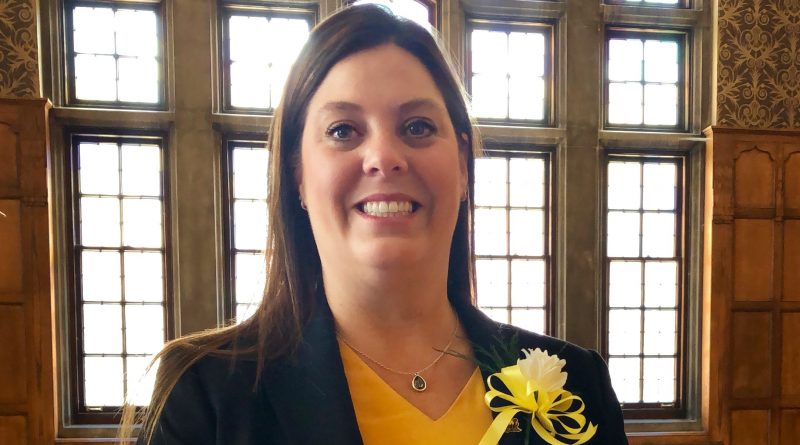 (PAW PAW, Mich) – Nancie Oxley, Winemaker and Vice President at Michigan’s St. Julian Winery, was honored on March 22 with the Purdue University 2019 Distinguished Agriculture Alumni Award, the College of Agriculture’s top honor. The award, established in 1992, recognizes mid-career Purdue College of Agriculture alumni who have demonstrated a record of outstanding accomplishments, have made significant contributions to their profession or society, and exhibit high potential for future professional growth.

“Nancie’s forward thinking has led the St. Julian winemaking team to outstanding levels of accomplishment and success,” said Dr. Brian Farkas, Professor and Head of the Department of Food Science at Purdue University. “With few women in the winemaking role, she has great potential for future professional growth as well as continued leadership within her community.”

While studying food manufacturing operations at Purdue, Oxley assisted Emeritus Professor of Enology Dr. Richard Vine in making wine as part of Purdue’s grape and wine research program. She also helped coordinate the Indy International Wine Competition held at Purdue; completed an internship with Geyser Peak Winery in California, under the tutelage of winemaker Daryl Groom; and was active in Perdue’s chapters of the Institute of Food Technologists and the American Wine Society.

In 2002, she received Bachelor of Science in Food Manufacturing Operations and double minors in Agribusiness Management and Organizational Leadership & Supervision. While at Purdue, Oxley was a member of several organizations, including Kappa Alpha Theta, Institute of Food Technologists and the American Wine Society. She earned a Master of Science degree in Food and Agribusiness Management from Purdue University-Indiana University in West Lafayette, IN, in 2010 with the MBA portion of her degree completed at the Indiana University’s Kelley School of Business.

Purdue’s long-standing strengths in agribusiness and food science, coupled with Indiana University’s expertise in management education, delivers the best of both worlds – an industry-specific focus on current issues and food and agriculture, paired with a general MBA. Both schools have international reputations and are highly regarded for their quality programs.

As the first professional commercial female winemaker in Michigan, Oxley has been with St. Julian for 17 years. Starting as a lab manager and enologist, she quickly moved up the ranks to Assistant Winemaker in 2003 and Associate Winemaker in 2008. She was promoted to head winemaker in 2010, was named to the board of the Michigan Wine Producers Association in 2015 and two years later was named Vice President at St. Julian.

Over the past decade and a half, Oxley has produced new wine styles, collaborated with growers, managed quality assurance and food safety efforts, supervised wine cellar staff and operations, and developed marketing information. Since she joined the winemaking team, St. Julian wines have won more than 200 “Best of Class” and “Double Gold” awards.

“I am honored to receive the 2019 Purdue University Distinguished Ag Alumni Award,” Oxley says. “I am so thankful for the support of my family, friends, my Purdue professors, and co-workers over the years as I’ve put my blood, sweat, tears, long hours, late nights, and lots of travels into my career.”