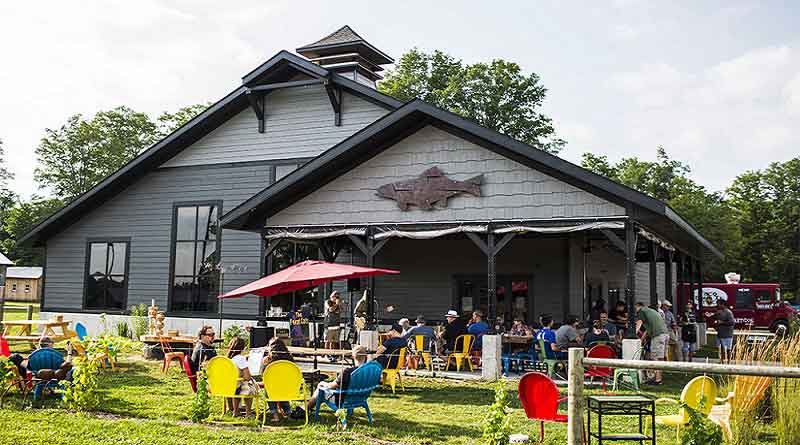 Michigan’s earliest residents lived off the land, drawing their sustenance from the woods, waters, fields and farms to nourish themselves. Iron Fish Distillery, located in the rural community of Thompsonville is digging back into those agricultural roots to craft artisan spirits inspired by the natural landscape.

George Chamberlain, who purchased the land from the state in the late 1800s, would have been proud to see the 119-acre abandoned farm on Dzuibanek Road brought back to life to serve the local community. His son and second-generation farmer, Victor, would have enjoyed the fruits of Iron Fish’s labors—given he himself operated a still onsite during Prohibition.

Having been neglected for more than 20 years, the farm and its buildings were deteriorating when David Wallace and Heidi Bolger acquired it in 2011. About that time, David’s sister-in-law, Sarah Anderson, sent her husband, Richard, and Wallace, on a distillery tour of Scotland. They returned to Michigan, inspired to create something unique in the state’s thriving spirits industry and develop a renewed sense of purpose to the farm.

“We really wanted to bring back the farm’s ag-centric origin,” says Richard. “We want to enhance the culture of the region, where we are living off the land and supporting other area farmers. Early distilling was a farm trade, small operations that were part of the community before industrialization and mass production took over the American landscape. We’re hoping to tap into that revitalization here at Iron Fish.”

The Betsie River originates near Interlochen and flows westerly through Grand Traverse, Benzie and Manistee Counties and is a natural river known for its salmon and steelhead—thus, inspiring the name Iron Fish. Wallace added a personal sense of style to the company’s branding with an intricate metal sculpture that he handcrafted and hung behind the tasting room bar.

The newly-built 4,900-square-foot production facility and tasting room opened in September 2016 and quickly became a place for visitors and neighbors to congregate.

Here, classic and inventive cocktails are blended using Iron Fish’s finest small-batch spirits crafted with deep well water—the first distillery in Michigan to do so. These spirits are incorporated with fresh seasonal ingredients like herbs, fruits and vegetables from Grossnickle Farms and King Orchards; house-made infusions and natural sweeteners like honey from hives that St. Ambrose Cellars maintain on the farm and maple syrup from the third generation Griner Family Sugar Bush help create the expansive drink menu.

Grains for the spirits are either harvest from the farm’s own fields or from northern Michigan growers like Send Brothers Farm in Williamsburg, which provides the Jupiter wheat for the vodka or the rye which is sourced from a pristine rivershed farm in the Upper Peninsula. Richard says one acre can produce 1,100 pounds of grain, which correlates to about 400 bottles of products. In their first year, Iron Fish utilized some 45,000 pounds of grain.

While gin, vodka and rum have been part of the Iron Fish portfolio since the beginning, whiskey takes 18 to 24 months to age, making it impossible for distilleries to offer their own product at the onset. To offset that, Iron Fish sampled over a dozen out-of-state products and selected one that they brought home to be blended and aged in maple syrup or tawny port barrels developing a unique tasting spirit. Their own whiskey is expected to be released in 2018.

Not sure where to start? A spirit flight provides the purest sampling of the spirits. Iron Fish Rum, made with molasses (not sugarcane), is barrel-aged with local honey. The Michigan Woodland Gin is layered with a complexity of flavors—with citrus on the front, followed by fennel and licorice at the end. The Michigan White Whiskey (available exclusively in the tasting room) is a blend of four grains, with an approachable sweetness both on the nose and the palate.

Looking for an enhanced distillery experience? Daily tours showcase every step of the soil-to-spirit process, from growing and harvesting, to milling, mashing, fermenting, distilling and bottling, ending with tastes of the handmade spirits for just $10 per person. VIP tours are available for larger groups and private event space, including one of the farm’s historic barns, provide the backdrop for rural celebrations.

Outside of Thompsonville, Iron Fish is available in distribution at hundreds of retail outlets throughout Michigan, including being the “Premium Vodka” available at Ford Field in Detroit.

Originally published in the Cottage 2018 issue of Michigan BLUE Magazine.