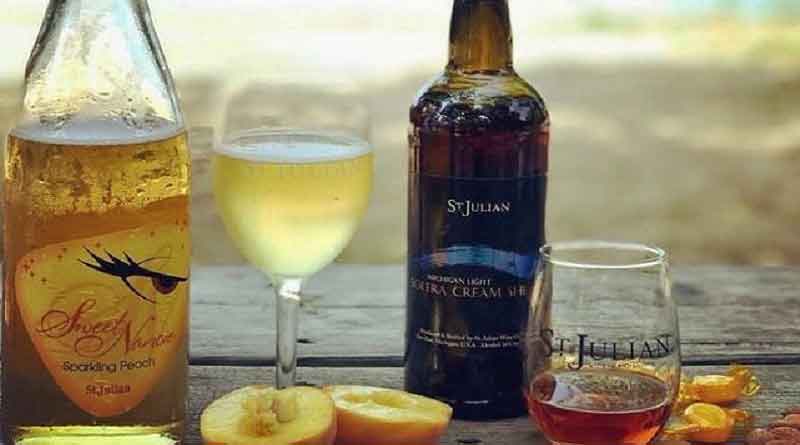 (PAW PAW, Mich) – St. Julian Winery, founded in 1921 and recognized as Michigan’s longest-operating and most-awarded winery, was recently awarded “Best of Class” and “Double Gold” honors for Sweet Nancie Peach and Solera Cream Sherry at the 41st Annual Michigan Wine Competition in East Lansing. A “Double Gold” was also presented to On the Town—an elegantly sweet white wine, with aromas of papaya, peach custard and honey with a fruity light-to-medium body.

An additional 31 medals were also brought home from the competition, including 5 Gold, 18 Silver and 8 Bronze medals. The complete list is below.

“We are honored to receive these medals from such an esteemed panel of judges at the state’s longest-running wine competition,” says Nancie Oxley, St. Julian’s Vice President & Winemaker. “We’re looking forward to celebrating with our fellow Michigan wineries on Thursday evening at the annual Gold Medal Reception at the Kellogg Center in East Lansing.”

Twenty-nine wine experts from around the country gathered July 31 for the annual competition, with Christopher Cook serving as Superintendent. This year, judges included Master Sommelier Madeline Triffon, and Doug Frost, who is both a Master Sommelier and Master of Wine, as well as notable wine writers, winemakers and wine educators.

Fifty-five of the state’s 145 wineries entered 413 wines into the competition, which is open only to wine produced from Michigan grapes and other fruit. Gold medals were awarded to a wide variety of wines – from bone-dry reds to sweet and luscious dessert wines. At the end of the day, judges awarded the top “Best of Class” awards to nine wines from a group of 95 Gold Medal winners, including 27 Double Gold.

In addition to the winery in downtown Paw Paw—where they produce award-winning wines, sparkling juices, spirits and cider—St. Julian operates tasting rooms in Dundee, Frankenmuth, Troy and Union Pier, with location opening this year in Rockford.

Cock of the Walk