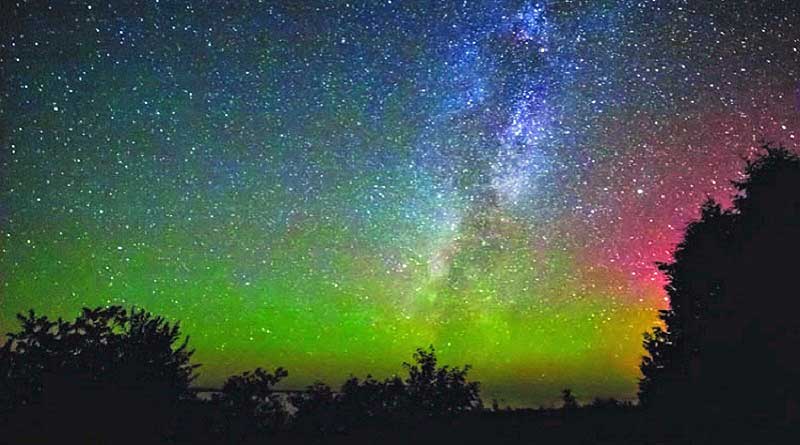 April is a BIG month for astronomy events and the sky’s the limit when it comes to unique venues in Pure Michigan for star gazing.

Organizations around the Great Lakes State are planning events on Friday, April 7 during Statewide Astronomy Day as part of the MSU Science Festival (April 7-23). Families are invited to head out to planetariums and observatories for hands-on activities, presentations, lectures and plenty of night-sky viewing.

The April Full Pink Moon (also known as the Sprouting Grass Moon, the Egg Moon and/or the Fish Moon) will grace the sky on Tuesday, April 11. According to The Old Farmer’s Almanac (founded in 1792), these distinctions “were used by early Colonial Americans—who learned the names from the local Native Americans; time was not recorded by using the months of the Julian or Gregorian calendar. Many tribes kept track of time by observing the seasons and lunar months, although there was much variability. The name itself usually described some activity that occurred during that time in their location.”

Every year, during the April “New Moon” (April 26), people gather around the world in celebration of dark skies for the International Dark Sky Week (April 21-28). Because of the moon phase, this year’s event also coincides with the peak of the Lyrid Meteor Shower: “a stream of falling stars from the Comet C/18612G radiant near the border between the constellations Lyra, the harp and Hercules.”

What is a “Dark Sky Park”? According to the International Dark-Sky Association, it is a “land possessing an exceptional or distinguished quality of starry nights and a nocturnal environment that is specifically protected for its scientific, natural, educational, cultural heritage, and/or public enjoyment. The land may be publicly owned, or privately owned provided that the landowner(s) consent to the right of permanent, ongoing public access to specific areas included in the IDA designation.”

The Headland’s International Dark Sky Park along the Lake Michigan shoreline in Emmet County, just southwest of Mackinaw City, is the only such recognized park in the state of Michigan. Recently awarded the “Pure Award” at the 2017 Pure Michigan Governor’s Conference on Tourism (March 21 in Detroit), this 600-acre park is free and open to the public every day. The Headlands became the sixth International Dark Sky Park in the U.S. and the ninth in the world when it opened in May, 2011. Construction has been going on since 2015 on the Waterfront Event Center at Headlands—which will be unveiled this summer. Because of its location, Headlands is an ideal setting for view stars, the Milky Way and even the Aurora Borealis (Northern Lights).

Finally, International Astronomy Day is scheduled for Saturday, April 29 with a theme this year on the Solar Eclipse. On August 21, 2017, a total solar eclipse will cross the U.S. from coast to coast, giving tens of millions of people in a 70-mile-wide, 2,500-mile-long path from Oregon to South Carolina a chance to see spectacular solar corona. The continental U.S. is the only land mass along the eclipse path.

Started in 1973 by Doug Berger, the president of the Astronomical Association of Northern California, International Astronomy Day also forms part of National Astronomy Week—which begins the preceding Monday in the United Kingdom to promote public awareness of astronomy by celebrating notable astronomical events.