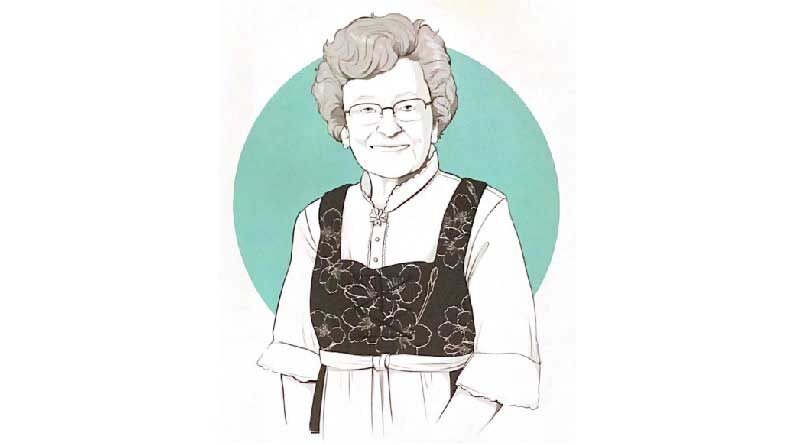 Dorothy Zender has delivered service with a smile for nearly 85 years.

Dorothy Hecht was just 16 years old in 1937 when she waited on her first table at then Fischer’s Restaurant in downtown Frankenmuth, and ecstatically earned her first 25-cent tip. When she met and eventually married William “Tiny” Zehnder, whose family owned Zehnder’s Restaurant across the street, her happiness continued–and a legacy began.

Fifteen years after beginning her career in the restaurant industry, Dorothy and Tiny made a pivotal decision to purchase Fischer’s with the Zehnder siblings, and renamed it the Bavarian Inn Restaurant. They then set their goals on transforming their small town into Michigan’s “Little Bavaria,” reflecting the community’s proud German heritage and ultimately putting the town on the map as one of the top tourist destinations in the Midwest.

After more than eight decades of service, Dorothy–who will turn 100 this December–is still cooking six days a week, with no immediate plans to retire. It is this dedication to her family business that earned her a spot in the Michigan Women’s Hall of Fame. Last fall, she was one of six women virtually inducted, and is among 333 women to be recognized since the program launched in 1983. Dorothy’s granddaughter, the vice president of Bavarian Inn Lodge, nominated her.

“In the 1950s, at a time when working outside the home was a rarity for women, Dorothy chose to run the Bavarian Inn’s kitchen and oversee food production,” says Martha Zehnder Kaczynski. “She did double-duty running the kitchen and raising her family. When they were ready, her children and grandchildren all started in the kitchen by training with Mom/Grandma like the rest of the staff. Through the years, Dorothy has become a strong role model in blending her business and personal life.”

“It is very rewarding to work with my family,” Dorothy says. “They love the hospitality business just like I do. Even though we may disagree at times, I know that they are looking to the future and are doing what is best for the business in the long run.”

Over the years, Dorothy has mentored tens of thousands of people, with many young staff cutting their teeth in her kitchen, learning proper cooking techniques and a strong work ethic.

Most of the German-inspired menu items have been personally developed by Dorothy, who has published three cookbooks: “Cookies & Bars,” “Come Cook with Me” and “From My Kitchen to Yours,” which collectively feature hundreds of hand-picked family-favorite recipes, accompanied by stories from her life.

The iconic Bavarian Inn is one of the 10 largest independent restaurants in the United States, employing nearly 400 people and serving some 900,000 meals annually within its 1,200-seat restaurant, in addition to catering for corporate events.