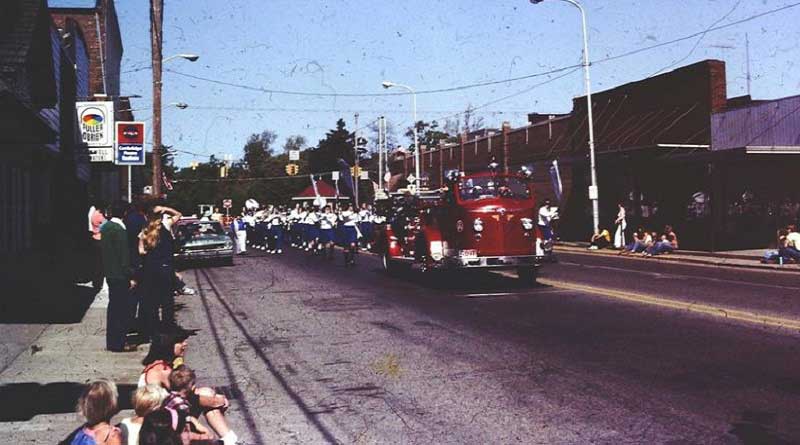 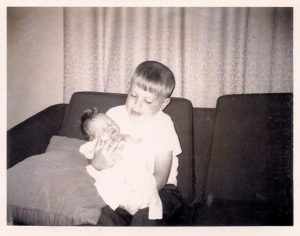 From the day I was born, I’ve commanded attention. Just ask my brother. Friday, May 30, 1969 and my brother, Bob, was anxiously anticipating his fifth birthday party. I, however, had other ideas about the whole situation. A 3:14 p.m. that day, I decided to make my appearance into this world. Surprise! Your birthday present is…a baby sister! So much for that birthday party. So much for solo birthday parties for at least the next five years.

We were both born on Memorial Day…originally known as Decoration Day. Established after the Civil War in 1868 by the Grand Army of the Republic—an organization of the Union veterans—it was a time for the nation to decorate the graves of the causalities of war with flowers. In the 20th century, both Union and Confederate holiday traditions were combined and Memorial Day was extended to honor all Americans who lost their lives while in the military service.

Although the name was widely used for more than 80 years, Memorial Day was not declared the holiday’s official name until a Federal law established it so in 1967. Then, in June, 1968, Congress passed the “Uniform Monday Holiday Act” which moved four holidays—including Memorial Day—from their traditional dates to a specified Monday in order to create a convenient three-day weekend (primarily for federal employees and the country’s growing tourism industry). That act moved Memorial Day from its traditional May 30 date to the last Monday in May, effective in 1971. However, it took a few years for all states to formally comply with this change.

On our home front, what that meant was that for the first seven years of my brother’s life (and the first two of mine), our birthday was a federal holiday—resulting in days off work, the closing of banks and national offices, and a parade! It’s no wonder I felt special from the onset—the date of my birth (and yes, my brother’s) was of federal significance (at least, in my mind).

While I have little memory of those first few birthdays, black and white photos show me and my brother celebrating with our extended family at my grandma and grandpa’s cottage on Pine Lake, just northeast of Plainwell, where we lived. For five years, there are photos of us sitting side-by-side at the dining room table with a shared birthday cake with my name on one side (along with my respective number of candles) and his name on the other (with his respective number of candles).

I can only imagine the rest of the holiday weekend was spent cruising around the lake on my grandparents’ red pontoon, swimming at “the point” where bluegill and sunfish beds provided hours of fishing entertainment and swinging on the red plastic swing that grandpa had hung from the tree in the front yard near the lake.

Growing up, the city of Plainwell always hosted a Memorial Day parade. I can’t recall exactly when they were held, but there were also Dawn Patrols at the airport—including pancake breakfasts in the hangar followed by flights over town (these may have in fact been held during Island City Festival). Regardless, Memorial Day has always been an important holiday in my life—and not just because it is my birthday (and oh, yeah, my brother’s). 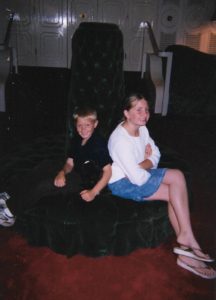 In 2003, I took my kids (Mollie, who was almost 11 and Caleb, who had just turned 7) to Mackinac Island over Memorial Weekend to experience the history of the Straits. It was there first time in the area, so we took a drive over the five-mile Mackinac Bridge to have lunch in St. Ignace. Of course, we also stopped in for lunch and a tour of Mama Mia’s Pizzaria—home to the Mackinaw Bridge Museum (two years before the fire which destroyed many of the artifacts on August 28, 2005). Question Straits people…why does the bridge museum spell Mackinaw Bridge with a W when it should be Mackinac with a C?

Anyway, then, we took Shepler’s Ferry over to the island for a three-night stay at Mission Point Resort. We explored Fort Mackinac where Caleb participated in the cannon demonstration; we walked up to have lunch at the Grand Hotel and took pictures on the porch and in the lobby; we bought souvenirs from various downtown shops; we sampled treats from the original Murdick’s Fudge and took an historic tour around the island (up behind the fort, and over to the Governor’s Summer Residence where we were “entertained” by a man who jumped off our carriage and up and over the fence of the home, up onto the porch before security detained him).

On Monday, we ferried back to Mackinaw City. Right behind us in line was then Michigan Governor Jennifer Granholm and her family. We saw that same security guard who captured the rogue tourist earlier in the weekend and told him we’d been on that tour. He didn’t have time to hear the full story, as (if I recall) he had to literally RUN back to the cottage to grab something the First Family had forgotten (the First Gentleman’s cell phone, I think).

Then, we visited Colonial Michilmackinac and checked out the “World’s Longest Running Archeological Dig” which began more than 50 years ago. We also took in the Memorial Day Parade and later toured Historic Mill Creek—likely on our way out of town.

It was our first trip together, just the three of us, and we made great memories and I hope it solidified in them the value of family vacations!