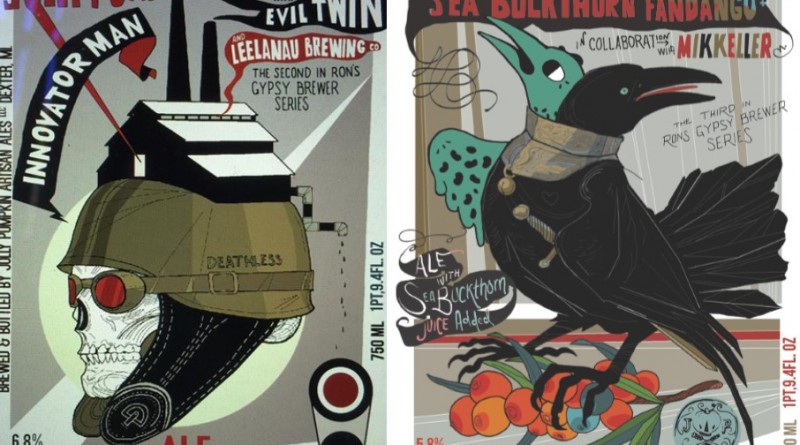 Michigan-based Jolly Pumpkin Artisan Ales has teamed up with some of the world’s most noted gypsy brewers in two new collaboration beers have just been released in limited quantities nationwide, at just $15 per bottle (while supplies last).

Sea Buckthorn Fandango (5.8% ABV) was brewed with Mikkeller—a microbrewery founded in 2006 in Copenhagen, Denmark. Crafted with sea buckthorn juice, a sour orange berry grown on deciduous scrubs native to the coasts of Europe, this beer was aged in oak for 14 months.

This is the third release in Ron’s Gypsy Brewer Series, an ongoing Jolly Pumpkin initiative to collaborate with well-known gypsy brewers in creating exciting and uncommon ales.

Based on the so-called “phantom” or “gypsy” ethos, Mikkeller doesn’t operate an official brewery but instead collaborates with other brewers to produce their recipes or experimental one-off brews.

Founded by two homebrewers—Mikkel Borg Bjergsø, a high school teacher and journalist Kristian Klarup Keller—who sought to introduce their home-brewed beers to the public and to challenge beer friends with intense new tastes, drawing inspiration from American breweries that aren’t afraid to play and break all the rules.

Today, Mikkeller’s micro-brewed beer is exported to 40 different countries and is internationally acclaimed as one of the most innovative and cutting-edge breweries in the world.

Innovator Man (6.8% ABV), a collaboration with  Evil Twin Brewing and Leelanau Brewing, is a sour ale that was brewed with strawberries before being aged in oak for 14 months.

Founded in Denmark in 2010 by Jeppe Jarnit-Bjergsø, Evil Twin is a gypsy brewery that produces limited-edition and one-off beers, as well as a series of seasonal and year-round beers available internationally. A former Copenhagen schoolteacher, Jarnit-Bjergsø is also the proprietor of the Ølbutikken bottle shop, which imports and distributes craft beer throughout Europe.

Labels for both of these beers were designed by artist Adam Forman, who has been with the company since it was founded by Ron and Laurie Jeffries in 2004. Jolly Pumpkin’s unfiltered, unpasteurized sour beers are brewed in the farmhouse tradition and often have a pirate or nautical theme, with Spanish names that are as unique as the beers themselves.