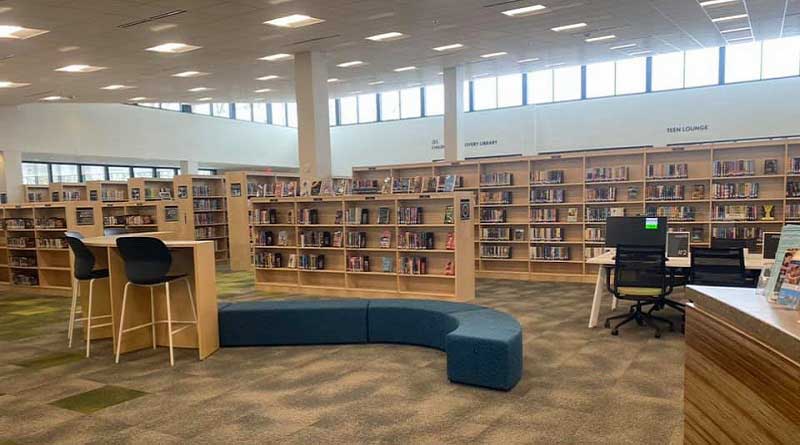 The first library that I remember in my hometown of Plainwell was inside 335 East Bridge Street (now a private home). My recollections are vague, but cloudy visions of story time are tucked in the back corner of my mind. I recall being jealous of my classmate Susan who later lived in the house…how lucky was she to reside inside a former library!

In 1973, the Charles A. Ransom Library opened across the street along the Kalamazoo River from that Victorian-era house. I would have been four years old. I am sometimes amazed at how many vivid images I have from the first years of my life.

As I grew older, I was allowed to walk or ride my bike from our house to the library – a full mile away. There, I would pull stories by Beverly Cleary, E.B. White, Judy Blume and C.S. Lewis off the shelves and devour them. I would choose my own adventures in the pages of Encyclopedia Brown and become fascinated with the characters in O’Brien’s Mrs. Frisby and the Rats of NIHM. My small blue library card with its metal plate and my distinct number was one of my most treasured possessions. I wish I still had it today, for nostalgia sake.

In fourth grade, when my grandparents had gone to Florida to escape the cold and snowy winter here in Michigan, I adopted Lucille Kortes as my surrogate grandmother not only because she made me strawberry cake and let me go to their Sun Theater and watch movies (with all the popcorn I wanted), but also because she let me go with her to the library to work on displays in the tall glass cases. Somewhere I have a picture of me during one of those days – dressed (if I recall) in burgundy corduroy pants and an appropriately early 80s button up blouse.

Around 1980, my parents loaded my brother and I up in our massive blue Buick for a summer road trip to research our family tree. Gettysburg was one of the primary destinations, but along the way we also found ourselves in cemeteries, town halls and libraries feeding what seemed like miles of microfilm through massive machines and feeding it dimes to spit out grainy copies of newspaper articles or other historical documents. At the time, the experience was incredibly boring but as I have reflected back on it over more recent years I recall how influential that trip was on so many levels.

It was about that time in my life I thought about becoming a librarian. How exciting to go to work every day inside the grand building with all of these beautiful stories. As I grew, I became more interested in writing stories…but my love of reading has never waned.

Middle school and high school exposed me to new libraries and new authors with new stories. I loved to get a pass from a teacher to go off in search of new books and when I became a freshman, I learned these places could be used for research as well (long before the internet). My passion for writing was intensifying, even things like term papers excited me – I think as much for the research element as the act of writing itself. Even today, the “hunt” for the information…the research…thrills me!

Ironically, my college years saw a decline in my library visits (or at least my recollections of being there). Although I was working three or four jobs and carrying a full course load. But my hiatus was short lived.

Once I began my family, I found a renewed interest in the Ransom Library – as a source for children’s books and later VHS videos that were free (unlike the video store). My daughter also found a love of books and was reading herself by age four.

Although my professional career never involved actually being a librarian, my career is directly impacted by libraries around the state. Always a researcher, I found libraries were a source of hidden treasures just waiting to be found. My love of reading also continued, although the genre changed from time to time. In the late 1990s, I began utilizing libraries in a new way – as a venue for presentations on topics of historical nature. And as a bonus, the libraries PAID for these programs. In fact, when I launched Promote Michigan in 2004 it was because a library group booked me for a series of events and paid for them all up front – giving me the seed money to leave my salaried job (with benefits) to follow my dream.

Fifteen years later, a totally new library experience came to light when my book – Michigan’s Haunted Lighthouses – could be found on the shelves. I was now one of the authors that hopefully children or adults will find pleasure in reading. My public presentations in 2019 exceeded 60, the majority of those at libraries around Michigan – including the library I had grown up in and fed my personal love of reading. Sadly, the three dozen or so events I had planned for 2020 were cancelled, postponed or moved to virtual…but I’m hopeful things will turn around before the end of this year!

When I moved to northern Michigan, I was asked by the Petoskey District Library to present one of my lighthouse programs – not in the main library, but in the historic Carnegie Library across the street. I was going to present where Ernest Hemingway had in 1919 when he returned from his service as an Italian ambulance driver in World War I (where he was severely wounded, taking 227 shards of metal to his legs). Other notable figures to address crowds within the walls of this 1909 building were Helen Keller, Mark Twain and Bill Cody. Carnegie Libraries quickly became a fascination (I have also presented in the Boyne City Library and Marguerite de Angeli Branch of Lapeer District Library, both Carnegie-built). For more, check out Carnegie Libraries of Michigan on Facebook.

Just a couple months ago, I found myself back in Plainwell with a few hours to spare and I made my way to the NEW Ransom District Library which had just opened (on the same lot as the 1973 building). All I can say is WOW. This modern building is not only full of books, but space as well. A community room to fit an adequate crowd (instead of cramming everyone into the previous Reading Room)…a special room for children and one for teens…meeting rooms and a beautiful reading room with floor-to-ceiling windows overlooking the Kalamazoo River.

As we head into National Library Week, April 4-10, I invite you to share YOUR favorite library stories with me. What is the first library you recall visiting? Do you still have a library card and more importantly, do you use it? What was the last book you checked out?