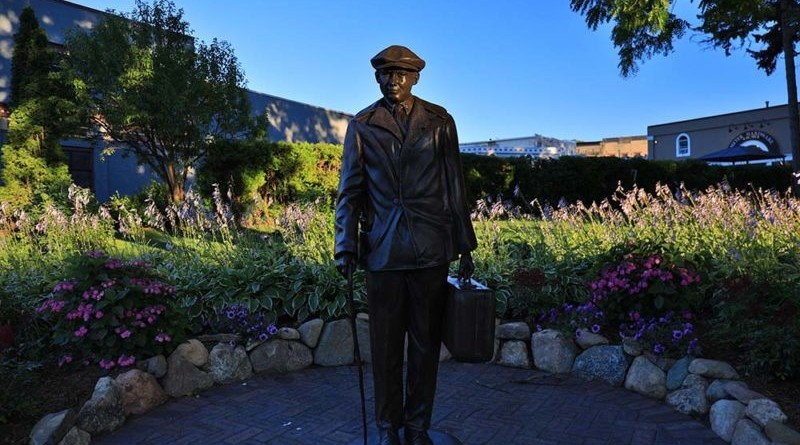 The event begins at 1:30 next to the young Hemingway statue which stands in the park and will include ice cream and cake, music by Robin Lee Berry, readings by local actors, a roundtable discussion in the Hemingway Room at City Park Grill and a free viewing of the completed documentary “Young Hemingway & His Enduring Eden.”

Hemingway’s actual birth date is July 21, 1899 and it was six weeks later that he first visited here. He would come with his family to this corner of the northern lower peninsula for the next 20 summers. He then was married in a Horton Bay church in the fall of 1921, and honeymooned with his first wife, Hadley, at the family cottage on Walloon Lake.

That first summer, he was witness to, but probably did not remember, the building of the cottage. Called “Windemere” by his mother and father, the small cottage – remodeled and enlarged in the 1990s – still stands on its original location and is still owned and occupied by a family member, Ernest Mainland.

Robin Lee Berry, who wrote and performs the documentary’s theme song, “Gone Wild,” will kick off the celebration in the Gazebo at Penn Park at 1:30 p.m. This will be followed at 2 p.m. by a cake cutting ceremony and ice cream for all those on-hand at the event. There also will be a letter writing station for children to participate in the tradition of writing summer vacation letters complete with a Hemingway Postal Stamp.

Readings from Hemingway’s earliest published work about Northern Michigan will then be presented by Dale Hull and Eric Grandstaff, both active in local theater. And from the River Walk Theatre group in Lansing, Michael Hays will present segments from his starring role in “The Hemingway Play,” a highly acclaimed play written for PBS presentation and now being performed by local theaters across the country.

At 3:30 p.m., a round table discussion open to the public of young Hemingway’s life in northern Michigan – and his published writings about that life – will begin in the Hemingway Room at City Park Grill led by members of the Michigan Hemingway Society. A cash bar will be available for those participating in the discussion.

The day’s celebration continues at 5 p.m. with a free viewing of the completed 75-minute documentary “Young Hemingway & His Enduring Eden,” the latest work by writer-producer-director Dr. George Colburn, who will be on hand to answer questions following the film. Over the past three years, previews of this production had been screened.

The Michigan Hemingway Society is once again hosting its annual literary and history conference, October 5-7 at The Terrace Inn in the Northern Michigan Chautauqua community of Bay View.

Membership in the Michigan Hemingway Society is $20 per calendar year for an individual, $30 for a family (two adults at the same address) or $10 for students. Benefits include a reduced fee for the annual MHS weekend conference, a printed copy of the MHS newsletter and periodic email updates of MHS news. If you are not a member of the Michigan Hemingway Society for 2017 you may join online now.