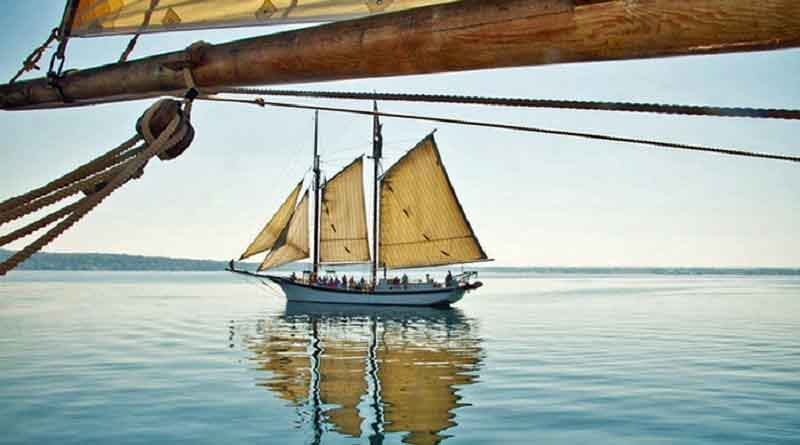 One of the most unique hands-on Pure Michigan experiences is to spend several days sailing the freshwaters aboard a dual-masted tall ship. You’re invited to board one of the largest sailing vessels in the Great Lakes during one of these autumn windjammer cruises aboard the Tall Ship Manitou with the Traverse Tall Ship Company. These trips combine nature, history and education in a fun and relaxing environment, free from the stress and worries of today’s busy lifestyle. This fall’s schedule includes:

Join Mary Stewart Adams as she guides you through a journey of the night sky. Mary is a star lore historian, storyteller and author who has been immersed in the history of star knowledge for nearly 30 years. Mary writes and speaks extensively to local, national and international audiences on our relationship to the night sky and its cultural consequences and has received numerous honors for her work. In addition, she is a member of the International Dark Sky Places Committee of the International Dark Sky Association (and former director of the Headlands International Dark Sky Park in Northern Michigan), protecting and designating dark sky sites around the world. Mary’s weekly radio program “The Storyteller’s Guide to the Night Sky” airs during Morning Edition on Interlochen Public Radio every Monday. Mary makes her home under the starry skies of Harbor Springs.

Explore the great wine regions of the world with sommelier Ryan Arnold as you discuss wine making history and taste varietals from different countries—including wines paired with dinner each night. A graduate of the University of Montana, Ryan studied in both Torino and Rome during his college years, where he first fell in love with food and wine. In 2004, he began his career as a member of the opening team for Lettuce Entertain You Enterprises (LEYE) Chicago restaurant Osteria Via Stato, and was reintroduced to Italian wine in the States, further sparking his passion and inspiration to pursue a career in the wine business. He followed his vision and in 2006 accepted a position with local Italian wine importer Vin Divino, quickly moving up the ranks to regional manager. In 2010, Ryan joined Winebow, a large New York-based import company, and opened their Chicago branch. Two years later, he rejoined the LEYE team as Divisional Wine Director where he develops various wine programs at restaurants including Ema, Summer House Santa Monica, il Porcellino, Stella Barra, Hub 51, Beatrix and more. In 2015, he was named Wine Enthusiast’s 40 under 40 and Star Chefs’ Chicago Rising Star Sommelier.

Let the stars be your guide as you round out the fall sailing season, your course determined by the wind. It’s likely Manitou will sail near the 200-acre Power Island toward the northern end of West Bay, just three miles off Bowers Harbor. It was also known as Marion Island or Ford Island, as auto giant Henry Ford owned it between 1917 and 1944. Maybe Manitou will make its way around the tip of the Leelanau Peninsula (where the Grand Traverse Lighthouse proudly sits, protecting the coastline) toward Cat Head Bay, a stunningly beautiful and quiet part of Leelanau State Park, featuring a remote shoreline and peaceful wooded hiking trails. If the winds are coming in from the southwest, Manitou may venture north toward Beaver Island, where Mormon leader James Strang declared himself king in 1850 before being assassinated just six years later by a few of his former followers.

Guided by the passionate, skilled and entertaining crew, this voyage sets sail out of Grand Traverse Bay aboard a replication of an 1800s “coasting” cargo schooner. A traditional two-masted, gaff rigged, topsail schooner, Manitou measures 114 feet in length with more than 3,000 square feet of sail. Passengers are free to leave the sailing to the experienced crew, but it’s much more fun to lend a hand and learn the arts of the sailor.

Trips are limited to 22 individuals, with accommodations provided in 11 double-bunk cabins. Fare includes lodging, all meals and sailing activities. Boarding takes place on the first day between 6-8pm. To make reservations for one of the multi-day windjammers, call toll free 800-678-0383 or order tickets online. Gift certificates are also available.

For additional information about the Manitou, including its corporate charters, log on to www.TallShipSailing.com.