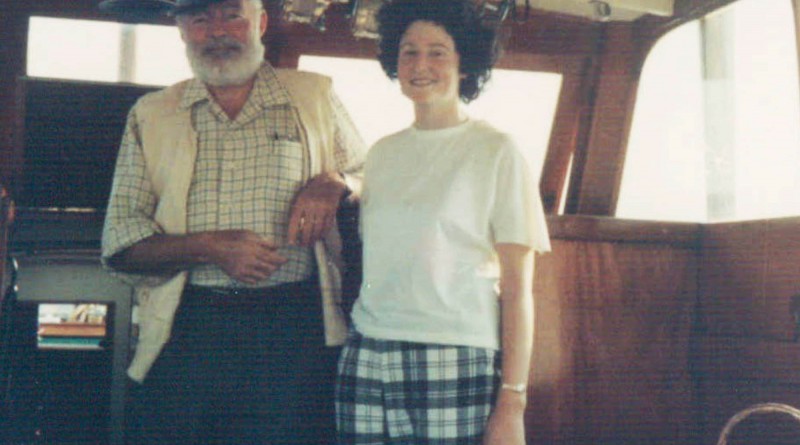 As part of its third annual “The Last Good Country: Walloon Lake, An Ernest Hemingway Occasion” weekend, the award-winning Hotel Walloon is inviting the general public to sit in and listen to first-hand accounts and stories from the author’s daughter-in-law Valerie Hemingway. The event will take place at The Talcott Event Center, directly across from Hotel Walloon, on Saturday, April 28 from 5:30-8pm. The cost is $85 per person and includes a meet-and-greet with Valerie, as well as two Hemingway-inspired cocktails.

A chance encounter in Spain in 1959 brought 19-year-old Irish reporter Valerie Danby-Smith face-to-face with the Nobel and Pulitzer Prize winning author Ernest Hemingway (who himself began his writing career as a teenager, writing for the Kansas City Star). What started as a simple and likely awkward interview turned into a once-in-a-lifetime opportunity for Valerie. One that would shape her life as a writer, editor and public speaker.

For the next two years, Valerie devoted her life to Hemingway and his fourth wife, Mary, traveling with them through beloved old haunts in Spain and France and living with them during the tumultuous final months in Cuba. Swept up in the wild revelry that always exploded around Hemingway, Valerie found herself dancing in the streets of Pamplona, cheering bullfighters at Valencia, careening around hairpin turns in Provence, and savoring the panorama of Paris from her attic room in the Ritz.

Working as Hemingway’s “personal secretary,” Valerie became so much more—she earned the role of confidante and sharer of the great man’s secrets and sorrows. She literally came of age in the company of one of the greatest literary legends of the twentieth century.

Even after Hemingway’s death, Valerie remained a key part of the family. She assisted Mary in organizing his files in Cuba and back in the United States, helping to pull together the pages of A Moveable Feast, which was published posthumously in December 1964.

Five years after Ernest’s passing, Valerie became a Hemingway herself when she married his estranged son Gregory, the author’s third and youngest child with his second wife, Pauline Pfeiffer. Valerie and Gregory had four children themselves, before divorcing after 21 years of marriage.

In 2005, Valerie published the 325-page book Running with Bulls, which recounts her years with the Hemingways. In her memoir, she tells the story of the incredible years she spent with this extravagantly talented and tragically doomed family. In prose of brilliant clarity and stinging candor, Valerie evokes the magic and the pathos of Papa Hemingway’s last years.

Hemingway’s connections to northern Michigan date back to his infancy, his parents building a cottage on Walloon Lake the year he was born. He would go on to spend every summer of his childhood and young adult life fishing the waters of the lakes and rivers in and around the area. These special places also showed up in his works, most notably The Nick Adams Stories and Torrents of Spring. The Michigan Hemingway Society, based in Petoskey, celebrates his ties to the Great Lakes States—regarding it as influential in the writer’s life as Paris, Spain, Cuba and Key West.

Reservations are still being accepted for the full “The Last Good Country” weekend (April 27-29, 2018) which features three days of events, including a private opening night reception with Valerie; a guided trolley tours around Walloon Lake and Horton Bay, as well as a walking tour through downtown Petoskey with Chris Struble, local historian and President of the Michigan Hemingway Society; a “Nick Adam’s” Feast at the historic Walloon Lake Inn; Sunday with the “Sun Also Rises” breakfast at Barrel Back Restaurant and a fly fishing demonstration by Brian Kozminski of True North Trout to honor the opening of trout season in Northern Michigan, a favorite past time of Hemingway’s; and two nights’ accommodation at the 32-room, AAA Four Diamond boutique Hotel Walloon.

Centrally-located between Petoskey, Boyne City, Harbor Springs and Charlevoix on Walloon Lake, Hotel Walloon is the perfect “home away from home” to enjoy all the adventure northern Michigan has to offer. For more information about the event or to make reservations, call (231) 535-5000.