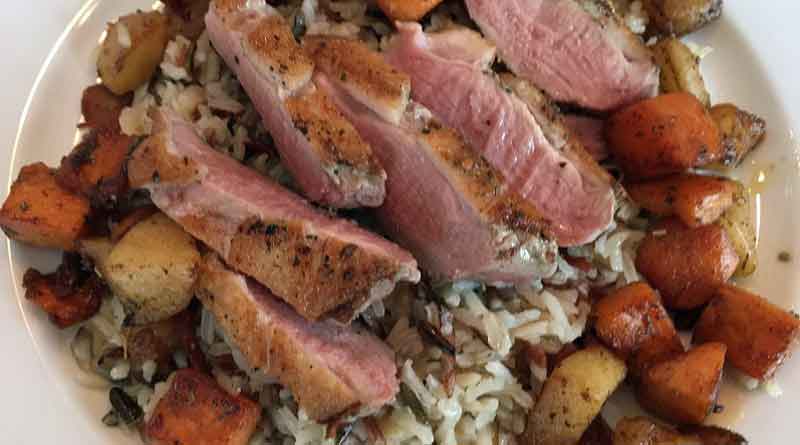 Growing up, many family traditions were centered around the table.

On Sundays after church, my cousins, aunts and uncles would gather at my maternal grandparents’ house for mounds of bacon and smoky links, toast with homemade strawberry freezer jam and an array of other potluck-style dishes. Thanksgiving, Christmas Eve and Easter were celebrated with enormous meals that seemed to last forever, followed by hours of card games!

I was about 10 when my Grandma Higgs taught me how to make pie crust from scratch (using canned filling, ironically). Later, it was the family recipe for Yorkshire Pudding which was served religiously alongside roast beef for Christmas (a tradition I am adamant about maintaining for my kids, nephews and niece).

When I was middle school age, my parents managed the former Red Brick Inn (my brother was a busboy) and it was here I got a taste for fancier foods like prime rib, crab legs and lobster (still some of my favorite things). I remember the excitement of helping the waitresses “tear down” the salad bar at the end of the night on the occasional Saturday I was allowed to hang out until closing time.

By the time I was in high school, my dad was finding his passion for cooking. I remember spending Saturday afternoons watching The Frugal Gourmet on PBS (well before Food Network or Cooking Channel). We began buying him cookbooks for Christmas, Father’s Day and birthdays after that and our dinner offerings grew (and were all tasty, minus one time where there was an over minting of the lamb—which I had yet to acquire a taste for).

Out of college and working my first adult job, I discovered my true love of dining out—despite the small discretionary budget for our growing family. Aries Cafe in Plainwell was the place to go for special French countryside inspired meals and even today some of their original entrees are among my favorites (and thankfully the Whitefish Grenoble is still on the menu at Four Roses in Plainwell…another treasured spot in my hometown).

When I began working in the tourism industry in 1997, a whole new culinary world opened up to me. I discovered Michigan wineries! And unique eateries all over the state from Harbor Country in Berrien County to Grand Rapids to Traverse City to Petoskey and beyond.

After launching Promote Michigan in 2004, I found myself drawn to certain sectors of the hospitality industry: restaurants, wineries, breweries, distilleries, farm markets and agricultural organizations. Yes, I found a way to get paid to eat and drink…how lucky!

I was also building a network and often friendships with chefs who were eager to feed my desire to learn more about locally-sourced ingredients and unique ways to prepare them into delicious dishes.

And along the way, I found that more than just my stomach was satisfied. My thirst for community was quenched…my hunger for fellowship was satisfied. It was more than just what was on my plate or in my glass…it was about the person who grew or crafted the foods and beverages that were sustaining me. It was about the conversations I was having with not only the chef, server, winemaker, brewer or bartender, but with family, friends, colleagues and often complete strangers sitting next to me.

When I was a teenager, our neighborhood hosted annual “block parties” where everyone brought a dish to pass and we gathered to reacquaint ourselves with each other (and back then, life wasn’t nearly as hectic as it is in today’s world).

About that same time, I also babysat for one of our neighbors who hosted occasional dinner parties. I remember the aromas coming from her kitchen as I entertained the kids in the den…the sounds of laughter, silverware on plates, clinking glasses throughout the meal and I remember the warm feeling that gave me inside. I know this is part of the reason I love hosting gatherings for my friends at my house!

In recent years, as I broaden my culinary horizons, I have found a handful of friends who have inspired me by their passion for cooking. Social media has helped that cause with the deluge of photographs that fill me feed (and yes, I am guilty of it as well on a more than regular basis).

This week, I had the absolute pleasure of taking that one step further by sharing a home cooked meal with one of those friends! Something we have talked about for years, but never got around to until now.

I first met Neal Dionne in the early 1990s when he moved to Grand Rapids to launch B93—a country music radio station. Over the following two decades, our paths often crossed as I was out promoting events for work…or as we ran into each other backstage at concerts.

I was working at West Michigan Tourist Association (1997-2004) when I first heard Neal mention on air that he liked to cook. So, the next time I was in the studio for an interview (promoting some event or another), I brought him a cookbook by a Michigan author. And the next time I was there, I did the same. Again and again…maybe a dozen books in all.

A few years into the Grand Rapids International Wine, Beer & Food Festival, my foodie relationship with Neal grew. I knew we could count on him for interview in the studio for B93 and WOOD Radio where he also had a show. He also did remotes from the festival, and I always made sure he had a nice full glass of Cabernet when he was doing his interviews (Michigan Cab if I could swing it, of course).

Three years ago, Neal found his way to the cooking stage at the Festival to share his talents with attendees. This past year, he cooked duck breast served with wild rice and sautéed butternut squash with apples. Sadly, I missed his demos because I was busy working various promotional aspects of the festival. Yet, every time I thought of that dish my mouth watered.

A few weeks back Neal commented on Facebook about that delicious duck dish. I commented (probably with 😋) and again we bantered online about how we really should get together and cook dinner. Turns out I had an evening open in my crazy schedule recently, so I reached out to Neal to see if he was available. And just like that, all the stars aligned!

Wednesday I pulled into the driveway of the beautiful new cottage that Neal and his wife, Jeanie had built. He welcomed me at the door with open arms, a smile and a hug.

After pouring us each a glass of Joel Gott Cabernet, we began to catch up on each other’s family life, work schedules and even the weather (like if spring will ever arrive). We talked a lot about radio, something both of us are intimately familiar with. We relaxed over snacks of shrimp cocktail, mixed nuts, chips and guacamole.

When it was time for dinner, Neal moved through the open-air kitchen with ease. He was as comfortable there as I had seen him all those years before running the board in the broadcast studio.

He delicately scored the skin of the duck breast and seasoned it before placing it (skin side down) in a heated (but not too hot) cast iron skillet. He cooked it slowly over the course of seven to eight minutes, working it to a rare temperature. Once he removed the duck from the pan, he covered it and let rest appropriately while he worked on the rest of the meal.

Then, he added cubed butternut squash and chunks of granny smith apples into the skillet glazed with the exquisite drippings and let them bath in the duck fat until they were well-coated and fork tender.

In all, it only took about 30 minutes to prepare the entire meal, with not a lapse in the conversation along the way.

We sat down overlooking their small lake to feast on this beautifully prepared meal (including a salad that Neal had fixed prior to my arrival). I’ve always thought food (and beverage) tastes better when you know the person who makes it – even more-so when you are witness to this creation and can sit with them to savor it, bite by bite (or sip by sip).

Four hours flew by that evening…even after a few bites of cheesecake and a quick whiskey nightcap. Well worth the wait and hopefully the first of more meals to come!