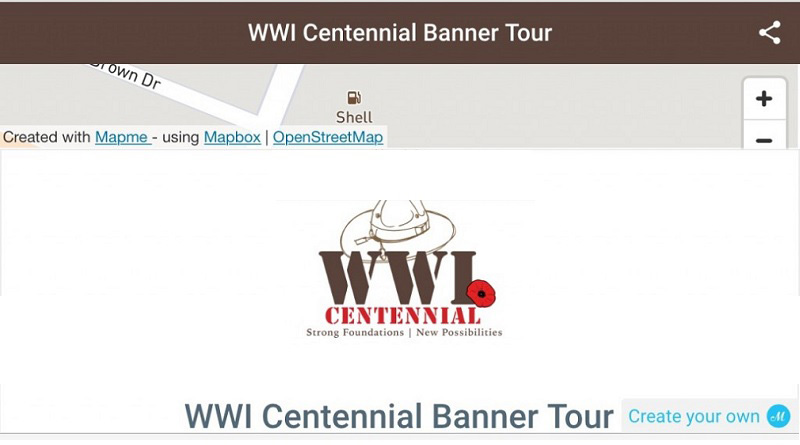 The 36 historic banners that make up the Chelsea District Library’s community-wide historic interpretation installation, World War I Centennial: Strong Foundations, New Possibilities, have found a digital home at MapMe—a publishing platform that allows for the mapping of sites and sharing of stories.

As part of MapMe, each site includes a photo, address and interactive map that shows visitors exactly where the banners are in relation to each other. Additionally, for each banner there is a detailed story that gives a look inside those from the area who served America during the Great War. The Chelsea stories can be found at http://bit.ly/ChelseaWWI and can be shared or bookmarked for future use.

“Visitors to town will now be able to bring up the map on their mobile device and travel through town to locate each banner,” says Keegan Sulecki, Head of Adult Services at Chelsea District Library. “We’re excited to use the technology to bring our history to life and in a way that’s convenient for our viewers. Those who have missed our guided tours will find the addition of these stories on MapMe give them more background into the individuals, groups and families featured.”

Those who have visited Chelsea to view the installation, or attended any of the events (see upcoming events below), are encouraged to complete an online survey: http://www.surveymonkey.com/r/WWIFeedback.

World War I Centennial: Strong Foundations, New Possibilities, commemorates the centennial anniversary of WWI and is made possible in part by a grant from the Michigan Humanities Council, an affiliate of the National Endowment for the Humanities as well as the Chelsea Chamber of Commerce Tourism Action Plan Program (CTAP), through Washtenaw County Convention and Visitors Bureau.

Several WWI-era photographs, letters, stories and artifacts including a helmet, binoculars, sword, riffle, medals, journal, uniform and more from local residents, are also on display inside the Chelsea District Library. Maps for self-guided tours are available free for those who wish to explore the exhibit on their own. Private guided group tours can be made, with prior arrangement.

WWI: The Shot That Killed Millions

100 years ago, a shot precipitated the carnage of the First World War and changed the whole of the Twentieth Century. What forces triggered by the death of an Archduke led to the slaughter of tens of millions? Join us for a fascinating presentation on the causes of this protracted conflict as part of Chelsea’s WWI Centennial: Strong Foundations, New Possibilities Commemorative project. Presented by Professor Emeritus Dennis Fiems. In partnership with Chelsea Adult Learners Institute.

Commemorate Veterans Day by experiencing the music of World War I. The summer of 1914 was calm and idyllic, but an assassination in Sarajevo would drag many nations into a war unprecedented in world history. Radio was still a few years off as a source of public entertainment, but the phonograph was in its heyday and songs were composed to encourage people to join the war effort as well as to protest it. Join us to review a little history of The Great War, hear some of these records, and remember the artists who made them.