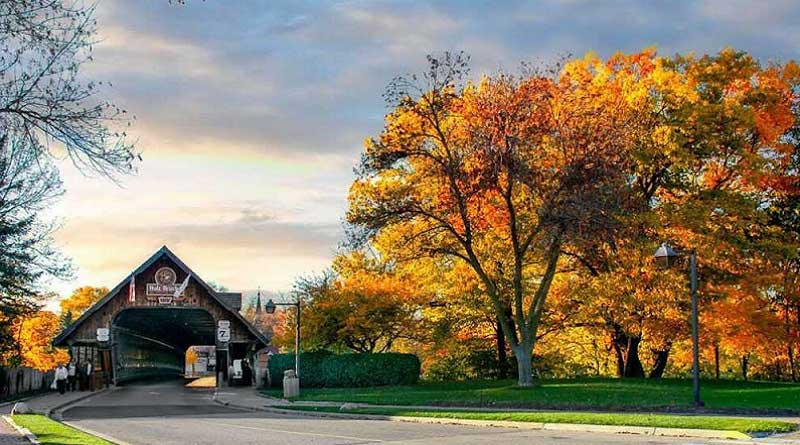 If your interest in covered bridges dates back to the 1995 film “The Bridges of Madison County” with Clint Eastwood and Meryl Streep, you’re not alone! It was shortly after seeing that romantic drama that I began researching Michigan’s historic covered bridges – of which just few still exist. Over the past 12 months or so, I made a point to visit a couple of these bridges that I had yet to see for myself (in person). It renewed my interest in these beautifully rustic structures and I am reworking my presentation of the same name to add to my portfolio and am even looking at publishing a book in the future with The History Press.

In the 1800s when crews began building wooden bridges to cross the rivers and streams around Michigan, they thought it would easier to add sides and a roof to protect the floorboards as opposed to getting into the flowing water below to replace the wood supports. As such, dozens of covered bridges began sprouting up over rivers and streams around the state of Michigan. While these bridges stand year-round, they are especially appealing to visit during the fall color season!

Joshua Ackley and Daniel Clouse built this 80-foot bridge in 1832 to span the Wheeling Creek between Washington and Greene counties in southwestern Pennsylvania, on property owned by the Ackley family. More than one hundred years later, the dilapidated bridge found a new home in southeastern Michigan.

In the mid-1930s, Henry Ford began searching for a covered bridge to add to his noted Greenfield Village. A short time later, Mrs. Harleigh J. Carroll – Ackley’s granddaughter – acquired her family’s historic bridge and turned it over to Mr. Ford. Today, it is one of the most recognized elements of Greenfield Village. 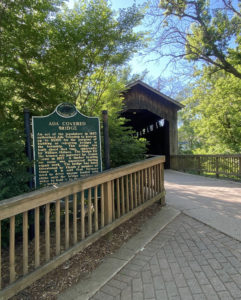 Legislation enacted in 1867 authorized Ada Township in Kent County to borrow up to $3000 to build the 125-foot covered bridge which spans the Thornapple River. William Holmes was contracted to build the bridge, which sports a “Brown Truss” system patented by Josiah Brown.

Over its history, this bridge has been repeatedly threatened by rising floodwaters of the river and it is said that in early days, farmers would drive wagons loaded with stones onto the bridge to hold it to the foundation. The bridge was closed to auto traffic in 1930 and restored in 1941, with wood acquired from a nearby barn.

In 1979, heavy snow collapsed the bridge’s roof but the townspeople of Ada raised the necessary funds to repair its prized possession. Unfortunately, shortly after the bridge was fixed it was completely destroyed by fire. The town’s citizens rallied once again – along with help from the Amway Corporation – and the bridge was once again rebuilt.

Once known as the Bradfield Bridge, the Ada Covered Bridge was listed with the Michigan State Register on May 9, 1969, and with the National Register on February 16, 1970. It was awarded a Michigan Historical Marker on August 28, 1974.

For its first 26 years, the 32-foot Augusta Creek Bridge sat on private property owned by William John Upjohn. Built in 1973 by Doug Carrigan, the bridge is 12 feet tall and 12 feet wide.

In the early 1990s, the Upjohn land – including the covered bridge – was purchased by the Department of Natural Resources. Unfortunately, vandals damaged the bridge in 1995 and there was talk of permanently removing the structure due to liability issues. At that time, the Augusta Creek Watershed Association began researching options to restore the bridge.

In the fall of 1999, the Chief Noonday Chapter of the North Country Trail Association and other public and private organizations banded together to dismantle the bridge and haul it in pieces the two-and-a-half miles to its present home in the Kellogg Forest.  There, at the main creek crossing, the bridge was put back together piece-by-piece. Today, the bridge is the highlight of the park area, boasting folding doors at both ends and shuttered openings on both sides affording views both up- and down-stream.

Historic Bowen’s Mills in Delton – just a stone’s throw from the Yankee Springs State Recreation Area – boasts a nearly 30-year-old bridge built to replicate one that once spanned the Thornapple River in nearby Middleville.

Designed by the first general miller, Neal H. Cook, this quaint scale replica was constructed in 1982 with wood that was donated from the old Middleville Mill. Sitting adjacent to a magnificent 17-foot water wheel and 1864 grist mill, this small historical village is a popular site for special events, family gatherings and weddings. 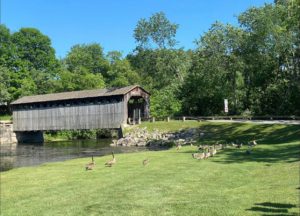 The first bridge built here in Fallasburg was constructed in 1840 to span the Flat River. As was common, the bridge was alter destroyed by high waters and massive spring ice jams. Jared N. Bresee, a bridge builder from nearby Ada, was contracted to build the present 100-foot structure in 1871 at the cost of $1500.

The original wooden abutments were replaced in 1905 by lower concrete structures. In 1945 and again in 1994, the aging bridge was extensively repaired but because the restoration was completed with specific attention to detail, it retained its historical integrity.

Located just five miles north of Lowell in the historical village of Fallasburg, this is one of only three covered bridges in Michigan open to vehicle traffic. However, signs at each end warn of a “$5 fine for riding or driving on this bridge faster than a walk.”

A well-kept local secret for many years, the Fisher’s Covered Bridge spans the Chippewa River in Isabella County’s Deerfield Nature Park. Originally built in 1968, the bridge was destroyed by fire under mysterious circumstances in 1995. The bridge was, fortunately, rebuilt the next year. This bridge is listed in a worldwide directory of covered bridges, produced by the National Society for the Preservation of Covered Bridges.

At 292 feet, Langley Covered Bridge is the longest covered bridge in Michigan and one of the longest in the nation. The bridge features three spans, each 94 feet long and stretches over the St. Joseph River just three miles north of Centreville on CR-133 in St. Joseph County.

The bridge is named after Thomas W. Langley, who in 1831 was Centreville’s first settler. Pierce Bodner used white pine for the frame timbers when he constructed this bridge in 1887. In the early 1950s, the St. Joseph County Road Commission extensively repaired the bridge. During the inspection, the inspector slipped and fell from the bridge in 28 feet of water below. Luckily, he latched onto a dangling rope and was pulled to shore, safely.

The Langley Covered Bridge was listed with the Michigan State Register on August 31, 1965. It was awarded a Michigan Historical Marker on September 28 of the same year.

Robert Nichols donated materials in 1988 to convert an existing railroad trestle on the 33.5-mile Kal- Haven Trail Linear State Park in South Haven – in memory of his late father: Donald F. Nichols. The Michigan Civilian Conservation Corps rebuilt the trestle into a 108-foot covered footbridge, which crosses the south branch of the Black River just a mile east of the South Haven trailhead and a half-mile east of Blue Star Highway. As this is part of the State Park, a Recreation Passport may be required. 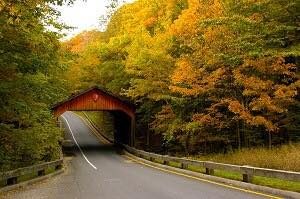 One of the highlights of the Sleeping Bear Dunes National Lakeshore – besides the dunes, of course – is the Pierce Stocking Covered Bridge. Both the bridge, and the 7.4-mile Pierce Stocking Scenic Drive, are named after Pierce Stocking – who spent his youth working as a lumberman in the woods and forests of Northwest Michigan. This nature lover was known to walk the bluffs above Lake Michigan, where he would gaze out upon the inland sea and the Manitou Islands.

Wanting to share this beautiful view with others, he conceived the idea of a road to the top of the dunes. The road was opened to the public in 1967 and shortly after the bridge was constructed (although it was gradually consumed by porcupines and had to be reconstructed in 1986). Stocking himself continued to operate the scenic drive until his death in 1976. The following year, the road became part of the Sleeping Bear Dunes National Lakeshore and later – at the urging of the nearby residents – the route was officially named the Pierce Stocking Scenic Drive.

As part of the National Park System, a vehicle permit is required.

The Reed City Covered Bridge is a charming addition to the 92-mile Frederik Meijer White Pine Trail Linear State Park, which stretches between Grand Rapids and Cadillac. Constructed in 2000 over the Hershey River, this is the newest of Michigan’s covered bridges. Sitting just a quarter mile from the “Crossroads” – the intersection of the White Pines Trail and the Pere Marquette Trail (which runs from Clare to Baldwin), the bridge trestle was built in the 1950s and was part of the right-of-way for the Grand Rapids & Indiana Railroad. 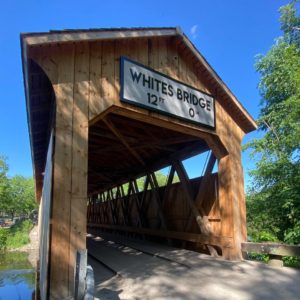 The White’s Bridge, which crosses the Flat River in Keens Township (Ionia County), was the oldest bridge of its kind in Michigan (and one of the area’s best-known 19th century structures) until it was destroyed by an arson fire on the morning of July 7, 2013. Thankfully, the community rallied and raised the funds to reconstruct what is now the fourth bridge built at or near the same location – originally called White’s Crossing in honor of one of the earliest pioneer families.

By the spring of 2015, the Whites Bridge Historical Society announced that it had raised monies (including a $275,000 grant from the Michigan Department of Transportation and $200,000 from private donations and grants) and they had been authorized to rebuild a replica bridge. The process would take years, but in the spring of 2021, signage had been installed and the bridge again welcomed automobile traffic.

The previous 116.5-foot structure was completed in 1869 by Jared N. Bresee – who also built the nearby Fallasburg Covered Bridge. The 120-foot bridge was built for a deferred payment of $1000 due in 1870 plus $700 due in 1871. However, in an effort to finish the job quickly, the builders planked the floor with second-hand lumber. Outraged by the discovery of auger holes in the planks, the residents deducted $25 from the first payment.  Despite the shortcut faux paus, the bridge was completed in just 84 days – using only man, ox and horsepower.

The White’s Covered Bridge was listed with the Michigan State Register on February 17, 1965 and was awarded its official Historical Marker on July 2 that year. 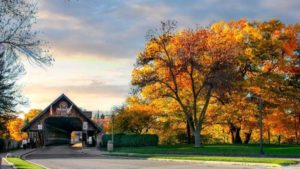 This 239-foot “Holz Brucke” (wooden bridge) spans the Cass River in Frankenmuth and connects Bavarian Inn with the city’s popular festival grounds. Open to both pedestrian and automobile traffic, it was designed by the architects of Graton & Associates and constructed in 1979. Hundreds of thousands of people cross this bridge each year as they visit “Little Bavaria” in central western Michigan.

Several smaller bridges can also be found on private property – including golf courses, resorts and campgrounds – around the state of Michigan including Loon Song (previously called Joshua’s Crossing) near Sleeping Bear Resort in Lake Ann and a pedestrian covered bridge on the property of Garland Resort in Lewiston.

To learn more or to book a presentation of “Bridges to Michigan’s Past” contact Dianna Stampfler at Dianna@PromoteMichigan.com or visit https://promotemichigan.com/speakers-bureau.