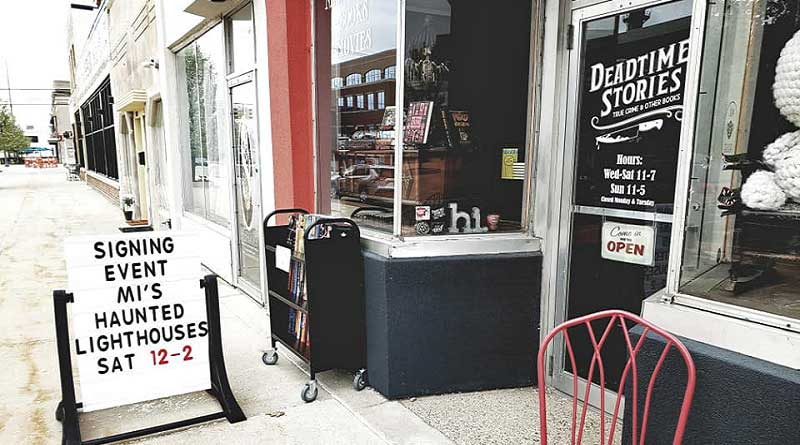 Over the years, there has been a growing interest in true crime, paranormal and other dark topics – thanks in part to an influx of podcasts, cable television shows and public tours/investigations. While we are inundated with real-time news stories about murders and kidnappings, many readers and writers remain fascinated with historic and often cold cases in Michigan’s shadowy history.

I was attending Western Michigan University in Kalamazoo (1987-1991) when a murder with local ties hit the national news via America’s Most Wanted. John List was wanted in connection with the murder of his entire family (his wife, three children and his 84-year-old mother who lived with them in their New Jersey mansion). List was born in Bay City, attended University of Michigan and later lived and worked in Kalamazoo (where his children were born). To this day, this case intrigues me and I have several books in my personal library about it.

As a former radio news reporter, I had my own experience with a murder case back in the early 1990s involving Diane Spencer from Allegan County, who was convicted of suffocating her infant son, Aaron (and subsequently, it was determined that she also killed two daughters in Pennsylvania in the years prior). I was the only reporter allowed jailhouse interviews with Spencer and also communicated with her via letters through a guard and her lawyer. I also had phone interviews with one of the nation’s most noted forensic pathologists, Dr. Michael Baden, who provided a wealth of information about Munchausen syndrome by proxy (which Spencer was later diagnosed with).

Years later, I had the chance to meet authors Tobin T. Buhk and Dr. Stephen D. Cohle (Kent County Medical Examiner), who featured Spencer in their 2008 book Skeletons in the Closet: Stories from the County Morgue – a follow up to their 2007 title Cause of Death: Forensic Files of a Medical Examiner. These journals (including graphic photos) follow Tobin as he shadows Cohle for a year, learning the technical and often gruesome aspects of autopsies and other forensic investigations. Over time, Buhk transitioned into the world of more historic crimes and he has since published a slew of titles including True Crimes Michigan, The Shocking Story of Helmuth Schmidt, Michigan’s Strychnine Saint, Poisoning the Pecks of Grand Rapids, Murder & Mayhem in Grand Rapids, Wicked Women of Detroit, Pardonable Matricide, The Lonely Hearts Killers and his newest (2021), Cold Case Michigan.

I discovered Michigan historic crime author Mardi Link around 2008 when she published When Evil Came to Good Hart, about the annihilation of the Roberson family at their summer cottage north of Harbor Springs in June of 1968. Technically still an unsolved crime, the main suspect committed suicide before he could be charged or put on trial. Within days of moving to Petoskey in 2015, I attended a discussion about this case with former teacher and local historian Rick Wiles which dug deeper into this case. Then, in 2018 (on the 50th anniversary) I attended a panel discussion on this case featuring Link, Wiles and some of the men who worked the case back in the day.

Link has two other true crime books which are among my top reads, including Isadore’s Secret (2009) about the mysterious disappearance of a Felician nun from her Leelanau County convent in 1907 (her body later found buried under a section of the church) and the search for her killer. It was named a Michigan Notable Book, a Great Lakes Great Read, and also spent several months on the Heartland Bestseller List. Link’s 2014 Wicked Takes the Witness Stand: A Tale of Murder and Twisted Deceit in Northern Michigan is back on my bedside stand for rereading given it is set in Gaylord (where I now live). The story stems from the December 1986 discovery of the frozen body of 31-year-old Jerry Tobias in the bed of his pickup truck outside a local shop and the crazy, conspiring and unbelievable story about how he ended up dead and who was responsible.

I was first introduced to Detroit writer Tom Henderson’s work when I picked up a copy of his 2006 Darker than Night: The True Story of a Brutal Double Homicide and an 18-Year Long Quest for Justice at a gas station years ago. In the summer of 2020, we even drove to Mio to see some of the sites where this horrific crime occurred (although we weren’t able to go into the bar noted in the story since it was closed during the pandemic). Years later, as a follow up to one of Buhk/Cohle books, I grabbed Afraid of the Dark: The True Story of a Reckless Husband, his Stunning Wife, and the Murder that Shattered a Family (2009) about the killing of Florence Unger by her husband and Detroit mortgage broker, Mark, at Watervale Resort in Arcadia, Michigan (Manistee County). Blood in the Snow (2011), A Deadly Affair (2014) and Blood Justice (2015) are also in my home library.

Writer and journalist Tom Carr spent 25 years writing for daily newspapers, including the Traverse City Record Eagle. He has three titles offering up dozens of stories dating back more than three centuries including Blood on the Mitten: Infamous Michigan Murders 1700s to Present (2016), MI BAD: Robbers, Cutthroats & Thieves in Michigan’s Past & Present (2020) and Dark Side of the Mitten: Crimes of Power & Powerful Criminals in Michigan’s Past & Present (2020).

As other Michigan cases cross my path, I find myself buying more books and doing more online research in various cases such as Terror in Ypsilanti: John Norman Collins Unmasked (2016) and The Richard Streicher Jr. Murder – Ypsilanti’s Depot Town Mystery (2018), both by Gregory A. Fournier; Luke Karamozov (1987) by Conrad Hilberry (about serial killer brothers Larry and Danny Ranes from Kalamazoo); The Michigan Murders (1976) by Edward Keys; Killing Women, To Hell I Must Go and A Slayer Waits by Rod Sadler; and Great Lakes Crime: Murder, Mayhem, Booze & Broads (and Great Lakes Crime II) by Fred Stonehouse.

If you want to actually hang out in the places where a true crime took place and where the filming of a movie of said case occurred, check out Anatomy of a Murder by Robert Traverse. Set in the Upper Peninsula’s Big Bay (northwest of Marquette) in 1950s, the courtroom drama starred James Stewart, Lee Remick, Ben Gazzara, Eve Arden and George C. Scott. It was nominated for an Academy Award and Duke Ellington’s music was up for a Grammy Award as well. You can take a self-guided “Anatomy of a Murder Tour” including the Lumberjack Tavern (where the murder occurred), Thunder Bay Inn, Big Bay Point Lighthouse, Marquette County Courthouse (where the trial was held), Mather Inn and more.

I would be remis if I didn’t give a shout out to my next book from The History Press: Death and Lighthouses of the Great Lakes – A History of Mayhem and Murder (due out in March 2022) which includes stories about lighthouse keepers who died tragically – whether that was murder, suicide or unknown yet graphic ways.

These are just a handful of the true crime stories, books and authors that you’ll find in one of the most unique bookstores in Michigan…DEADTIME STORIES in REO Town in Lansing, owned and operated by author (Haunted Lansing (2015) and The Cereal Killer Chronicles of Battle Creek (2021)) and founder of Demented Mitten Tours, Jenn Carpenter. Oh, and she ALSO has a podcast called “So Dead Podcast” which delves into all kinds of local crime and cold case files AND is a producer of the “Festival of Oddities” held each year. And, while you’re in her ’hood, make time to stop into Jenn’s SCREAMATORIUM where you can find all kinds of creepy, crawly, spooky and dark gifts, home décor, candy and other items…all with a dark twist (and open year-round, not just around Halloween season.