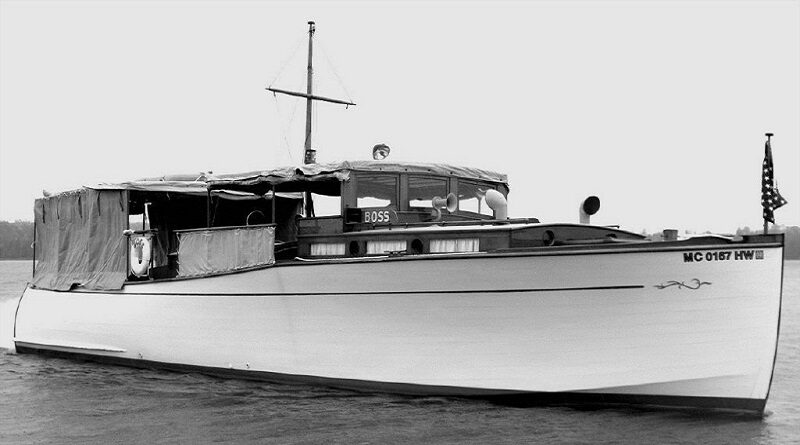 Childhood dreams do come true. Just ask Janet (Noyes) Carrington, a seventh-generation resident of the Les Cheneaux Islands in Michigan’s Upper Peninsula. She was just eight years old in the late 1950s when she first laid eyes on the luxury 42-foot wooden yacht named Boss, docked at E.J. Mertaugh Boat Works in Hessel. It was love at first sight. She admired its sleek lines, rich mahogany color and unique character, and promised herself that someday Boss would be hers.

It would take nearly 50 years to turn that dream into reality. In 2006, Carrington became the owner of one of the Great Lakes’ most historic and iconic boats, bringing Boss back to the home waters of northern Lake Huron where she had first fallen in love with it. Since then, Carrington enlisted the help of none other than Mertaugh Boat Works to freshen up Boss in preparation for its 100th birthday.

Boss was originally constructed by the Great Lakes Boat Building Corporation in Milwaukee for St. Louis cotton mogul Alvin D. Goldman, who gave very specific instructions on how his boat was to be crafted and asked his friend (and fellow millionaire) Al Pack to manage the project on his behalf. When completed, the one-of-a-kind luxury $13,500 Day Express Cruiser boasted a Cyprus hull, white oak frames, brass and copper hardware (including the air vents), mahogany varnish and trim, and a wooden mast.

In lieu of a forward cockpit, the cabin was outfitted with large upper and lower sleeping berths to accommodate four people comfortably; the galley with a large ice box, sink and kerosene range with an oven, was modern for the era. The spacious rear deck featured a built-in seat along the stern and wicker chairs with cushions were placed beneath a removable canvas canopy with roll-up side curtains – making it the perfect spot for entertaining guests. Powered with a Sterling engine, Boss was ready to head to Goldman’s boathouse in Charlevoix’s Round Lake in June 1921.

Like many from St. Louis, Goldman vacationed in northern Michigan and with Boss he was able to explore the waters around Charlevoix, Horton Bay, Petoskey, Harbor Springs, DeTour and Drummond Island, as well as the North Channel of Ontario. And, of course, the Les Cheneaux Islands.

Not long after Goldman launched Boss, Gene Mertaugh built his first boat house out of scrap lumber and in 1925, the E. J. Mertaugh Boat Works Company was founded. Mertaugh’s later became the first Chris-Craft dealership in the world, bringing wooden boats made in Algonac (near Detroit) up through Lake Huron during the height of prohibition (some of these boats were even said to smuggle booze to speakeasies on nearby Mackinac Island). The continued interest in classic boats lead Mertaugh to create the annual Les Cheneaux Islands Wooden Boat Show in 1978 which continues to be held every second Saturday in August. Over the years, Boss has made numerous appearances.

For decades, Goldman and his family and friends enjoyed their Great Lakes summers (and Florida winters) aboard Boss. In 1942, there was a time when Goldman thought he might perhaps lose his beloved boat as the U.S. Navy was purchasing private vessels to be used as patrol boats during World War II. He provided the government with the required specs on the boat, but thankfully it as never commandeered.

After Goldman passed away in September 1958, his son, Jack, became the second owner of Boss although the boat rarely left its enclosed slip in Round Lake until it was sold in 1968 to William Dykstra, Herbert Lantinga and Robert Brandt.

It was during this era that another young girl from Michigan was introduced to the Boss, creating her own set of childhood memories that have lasted a lifetime.

Shelley (Glupker) Koster was an impressionable child when her family began making the summer pilgrimage from their home in Grand Rapids to Charlevoix, where her dad had a several boats. They would hang out with his friend, Bill Dykstra and his family on Round Lake and one weekend a month, for as many as 10 years, Shelley and her brother, Mike, along with Dykstra’s children (Mary and Billy) settled into the Boss bunks to spend the night. All these years later, Shelley says the smell of varnish can take her back to those magical youthful nights on that historic boat.

Little did Shelley know then the role that she and her family’s company would play in the present and future of Boss. In 2000, Shelley and her husband, Brad, purchased Mertaugh Boat Works from her parents, Bruce and Nancy Glupker, (who had bought it from Gene Mertaugh’s sons, Jim and Jack, in 1989). Over the past 15 years, the story of Boss and Mertaugh’s has become intertwined into one shared by two women with their own distinct recollections of just how special this boat is.

“It was so beautifully cared for and had never been messed with,” Carrington said in a 2007 article in the St. Ignace News. “I looked all around to find something unoriginal, and there wasn’t anything. No brass or wood was replaced. That’s what really impressed me.”

When Carrington acquired Boss, much of the canvas was original as was about 99 percent of the wood and hardware. Since then, there have been a few repairs to the keel and stern, as well as a few individual planks. The engine was also upgraded to a new fuel-injected Crusader, making the driving process more streamlined for Carrington’s daytrips throughout the region.

“With the exception of cushions for the berths and an outside curtain, the interior is a time capsule of the highest quality yacht craftsmanship available in 1921,” says Shelley.

The Mertaugh team has been working for months freshening up Boss’ exterior with fresh paint, polish and a few other refurbishments that are expected on a 100-year-old well-loved boat. It made its first public appearance of the year on August 13 at a special celebration to kick off the Wooden Boat Show weekend, where it once again wowed the crowd.

As Boss was a custom commission, there is not another one exactly like it out here. It is regarded by boat enthusiasts to be one of the finest antique yachts on the Great Lakes due to its uniqueness and ongoing love and care at the hands of its past and present owners and restorers.

“One thing is sure, were it not for Boss’ diligent owners who were each dedicated to maintaining exceptional standards of originality and quality, we would not be able to enjoy the vision of such a beautiful vessel in the water each year,” Shelley says proudly.