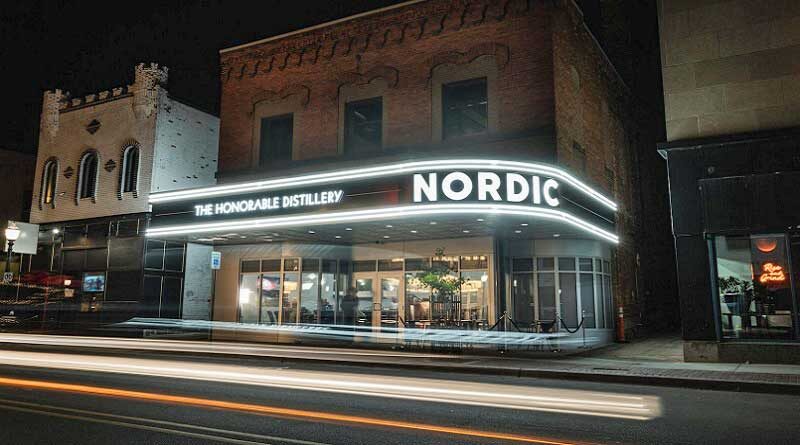 Two engineers walk into a bar…

No, wait…two engineers OPEN a (cocktail) bar and craft distillery in downtown Marquette and call it The Honorable Distillery (THD).

Anne White and Scott Anderson, who both hold Master of Science degrees (hers from the University of Kansas and his from the University of Colorado), have a combined 60-plus years’ experience in nuclear clean-up at the national level. White also served two years (2018-2019) as assistant energy secretary in the U.S. Department of Energy, receiving “the honorable” title after being confirmed by the U.S. Senate., thus the distillery name.

Today White and Anderson (business and life partners) spend their time in this Lake Superior college town working with distillers Rob Stoll and Abby Szukalski perfecting their recipes for vodka, gin, bourbon, rye and single-malt whiskey. Stoll and Szukalski are both new to the world of distilling, but each has a solid foundation and plenty of passion to build upon. Stoll has been homebrewing for 10 years and has worked at three Midwest breweries while Szukalski holds a degree in environmental science and interned with Takima Chief hop farms in Washington.

THD is located in one of downtown Marquette’s historic buildings at 136 W. Washington Street, which opened in 1936 as the Nordic Theater. Built by famed architect Michael Meredith Hare—who helped design New York’s Rockefeller Center and Radio City Music Hall—the theater operated until 1994. It then became Book World, which closed in 2018. White and Anderson acquired the building in 2019 and initiated their retirement dream of running a distillery which has been open since August 1 (with the official Grand Opening / Light the Marquee Party on October 8).

“Opening a distillery, especially in the midst of the supply chain issues we faced during construction was epic…not an easy thing to do in the best of times,” Anderson says. “We had a great contractor, Gundlach Champion, to help us through.”

The three-year project represents over $2.7 million in total capital investment along with a grant of $432,824 by the Michigan Economic Development Corporation (MEDC) from its Michigan Strategic Fund (MSF). Created in 1984, the MSF has broad authority to contribute to projects that promote economic development and create jobs around the state as part of the Michigan Community Revitalization Program. This initiative is designed to accelerate private investment in Michigan’s communities through the redevelopment of functionally obsolete properties, reduction of blight, and the reuse of brownfield and historic properties.

“Our still is a classic multi-purpose still in that we can make single malt (Scotch), whiskey, vodka and gin using the same still,” says Anderson. “There are multiple bypass valves that allow for this to happen. The really tall column is the vodka column. While vodka is pretty ‘non-descript’ in terms of flavor it is the most difficult spirit to distill because from a legal definition perspective it must be distilled to greater than 95% alcohol.”

“We choose to make our own vodka fresh from grain for many reasons,” White notes. “It differentiates us and is a really great way for us—as a very green team of owners and distillers—to learn a whole bunch. Once we have our own grain mill and can use exclusively U.P. grown grains, it will be a great win-win-win for the farmers, THD and our community at large.”

Christopher Kibit, professor of technology and occupational sciences at NMU, recently brought students from his Bar and Beverage Management class at Northern Michigan University (part of the college’s hospitality program) to THD for a behind the scenes look at the operation including a tour, tasting and cocktail demonstration. In years past, he has taken students to visit the area brewpubs but now they’re also exposed to how local ingredients can be used to craft spirits and cocktails.

“As a student with numerous experiences in the Hospitality field, The Honorable Distillery provides an authentic unique tour that engages the participants through education and fun thought provoking facts,” says Freddy Sims, a NMU student.” [They’re] passionate folks who are excited to tell you and show you why they provide quality spirits and top-notch cocktails made with care.”

Marquette is no stranger to the craft beverage industry. The Vierling opened its brew pub in 1995 and today there are a half dozen breweries in the area (plus more in nearby Negaunee).

“The Honorable Distillery is a wonderful addition to the Marquette craft beverage scene,” says Susan Estler, President & CEO at Travel Marquette. “They offer carefully curated cocktails that are expertly made to be savored in a unique setting all on Washington St. It’s not to be missed when you come to town.”

For White, life has definitely come full circle. “I grew up here and watched movies in the Nordic when I was a kid,” she recalls. “I left Marquette in 1984 and really didn’t think for a moment I would return, but here I am and I love it. I guess we don’t really appreciate what we have when we’re young and really want to see other places. It has been amazing to be back.”