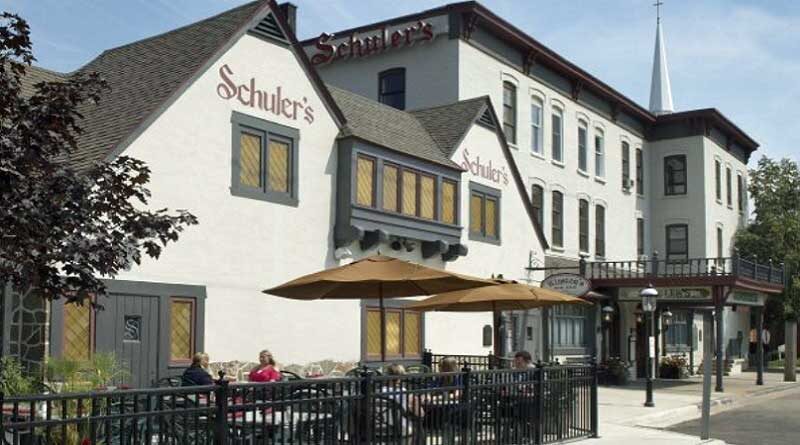 The Schuler name is synonymous with hospitality, at least in southern Michigan. Located in Marshall, in the heart of Calhoun County, the iconic Schuler’s Restaurant & Pub (115 S. Eagle Street) has been welcoming hungry and thirsty visitors since first opening the doors in 1909. Recognized as one of the longest-operating restaurants in the state, Schuler’s remains dedicated to maintaining its roots while branching out in new and exciting ways.

The people behind the company: Albert “Bert” Schuler was one of Marshall’s early entrepreneurs. As a child, he worked as a delivery boy for a local grocery and later became a cigar maker, opening a cigar store in 1909. To that space, he added a bakery, lunch counter and billiard tables, quickly growing his portfolio of businesses. In the early 1920s, he purchased a hotel with a small dining room, calling it The Albert. He ultimately sold that hotel and in 1924 acquired the larger and more prominent Royal Hotel & Restaurant, immediately changing its name to Schuler’s.

By 1934, the second generation stepped in as brothers Albert Jr. and Winston became managers of the hotel and restaurant. It was under Win’s leadership that the name Schuler’s became legendary – building up to nine restaurants across Michigan (and one in Indiana) – including the flagship property in Marshall (which featured not only hotel rooms and a restaurant, but a small bowling alley for a brief period of time).

Hans Schuler grew up in the family business, officially joining the ranks in 1959. The next year, he took over operation of the family’s butcher shop and Bar Scheeze production plant – refining the recipe and ultimately introducing the popular snack to the retail market (including United Airlines). Today, packaged Schuler’s Bar Scheeze is produced by the Campbell Soup company while the Heritage Cheese Spread remains a customer favorite in the restaurant. Hans became Chairman and President in 1980 and grew the business to include a pub, meeting spaces and catering services.

Sue Damron joined the Schuler’s operation in 1998 as Executive Assistant to the Chairman, moving up the ranks in subsequent years to Executive Vice President and Chief Operating Officer (2010), President and Managing Partner with minority ownership share (2014) and finally Owner, President and CEO (November 2019). Her daughter, Elizabeth, also works for the company – which remains family owned and operated.

How the company is expanding: In the early 1970s, the hotel rooms at Schuler’s were closed and that chapter of the story ended. Yet, there is a new chapter being written that will benefit the company as well as the community.

“These former hotel rooms, which once welcomed travelers, had become nothing more than storage for us over the past 50 years,” says Damron. “Now we are creating spaces for people and families to call home. The seven apartments are being designed to reflect Schuler’s brand by mixing historic and traditional elements with an updated look and feel.”

These second and third floor mixed-income units, four of which will be reserved for low-to-moderate-income residents, will bring much needed housing and vitality to the downtown area. This is phase one of the project, financed in part by a $725,450 Community Development Block Grant from the Michigan Strategic Fund along with $1.7 million in private investment and a 12-year Obsolete Property Rehabilitation Act tax abatement valued at $561,600. Phase two, which includes five boutique hotel rooms to be constructed in defined wings of the building, begins in 2023.

Another upcoming project is the renovation and repurposing of an abandoned and dilapidated building just blocks from the restaurant (and future hotel) into a unique event space. The 13,305-square-foot building will ultimately feature a catering kitchen, banquet and reception rooms, offices, lounge, meeting space and more to accommodate up to 250 guests with a variety of space configurations.

“The hope is that this venue will become a community hub for events and cultural celebrations,” Damron says.

How the company stays true to its roots: Simply put, it’s called “The Schuler Way” and it is how Damron, and her team, run the business on a daily basis.

“We have identified those things that set us apart and that our guests expect when they choose to spend their time and dining budget with us and we are finding ways to make them even better,” says Damron. “We are looking at how we can go the extra mile and deliver ‘surprise hospitality’ touches like greeting regulars by name and remembering their favorites of the menu or sharing a bit of our history with guests who are visiting us for the first time. In this digital era, it’s the one-on-one contract that makes the biggest impression in the hospitality industry.”

With over 110 years of history, Schuler’s prides itself of its legendary reputation from everything like the classic yet ever-evolving menu, the charming building with its distinct dining areas and the loyal staff (extended family) that prepare and serve those mouth-watering meals.

“The Schuler’s brand remains dedicated to providing an unparalleled experience on several levels,” say Damron. “We have the benefit of generations of experience behind us which will continue to guide us toward the future as one of Michigan’s longest-running restaurants.”