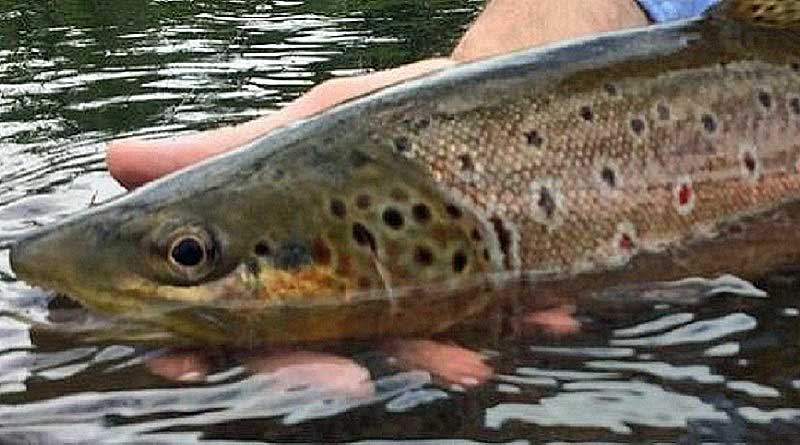 Did you know that Michigan is home to more than 150 different species of fish – found throughout the fresh waters of the Great Lakes, 11,000-plus inland lakes and 36,000-miles of rivers and streams (including over 20,000 miles of classified cold water trout streams…about 850 miles of which are considered “Blue Ribbon Trout Streams”). In fact, Trout Unlimited was even founded on the banks of the Au Sable River in 1959.

It’s no surprise then that the trout was designated as Michigan’s official state fish in 1965.

But the trout wasn’t the only contender for the honors. Earlier that year, Rep. Charles J. Davis (R-Onondaga) introduced what was referred to as the “Blue Gill Bill”.

On February 5, 1965, Lyall Smith – Sports Editor and Columnist for the Detroit Free Press from 1945-1965 – published an entertaining piece on the subject under the headline: “If We Must Have a State Fish” where he referenced other respectable species to consider:

“Charlie is certain to run into opposition. Aficianados [sic] of the brook trout, the rapacious brown, the giant sturgeon, the fighting small mouth bass, the carnivorous northern and the succulent walleye can be expected to rise to a point of order.”

To read Lyall’s column in its entirety, including his final recommendation for the state fish designation, click the headline above.

A month later, the issue was still being discussed in Lansing. A March 4, 1965 article that was distributed by UPI and published in several newspapers stated “After 35 minute of eloquent debate and somewhat fish humor at the expense of the blue gill and the perch (proposed in an amendment by Rep. Bobby D. Crim, D-Davidson), the House finally granted the bill tentative approval—but with every indication it would be tossed out of the legislative pond to die Friday. Meanwhile, in the Senate, Sen. Terry L. Troutt, D-Romulus, proposed a bill that would tap the trout for that honor.”

On Thursday, June 3 the House of Representatives voted 69-26 to make the Trout the state’s official fish (this bill had been unanimously approved by the Senate seven weeks prior). Yet, there were some legislators fighting for the blue gill right until the very end.

“Rep. Homer Arnett, R-Kalamazoo, promptly proposed an amendment to the Troutt bill striking out ‘trout’ and inserting ‘blue gill’” according to an article that ran that Friday in the Lansing State Journal. “’This is the little fish that everyone knows and catches with very little effort,’ Arnett said, ‘and there are all kinds of trout—rainbow trout, speckled trout, brown trout, and now Senator Troutt. It takes a lot of fancy equipment and a special license to catch them.’

“Rep. Donald E. Holbrook Jr. R-Clare, wistfully agreed. “’The first fish I ever caught was a blue gill,’ he said. ‘And I’ve yet to catch a trout.’”

Meanwhile, Rep. Joseph M. Snyder, D-St. Clair Shores, chairman of the House Conservation and Recreation Committee, argued the consensus of his committee was “if you have a state fish, it should be a game fish like the trout.”

In the end, it took a roll call vote of 52-39 to seal the deal for the trout, and the bill was sent off to Governor George Romney’s desk for signing.

It should be noted that Rep. Arnett made valid points during his comments in 1965 when he said “there are all kinds of trout”. Out of all the types of fish in Michigan, there are actually five different trout according to the Michigan Department of Natural Resources: Brook, Brown, Lake, Rainbow and Steelhead. Which explains why in 1988, the Michigan legislature revisited this fish issue.

“The Michigan Legislature finally cast off the controversial brook trout legislation Thursday, sending it to Gov. James J. Blanchard for his approval,” according to a January 22, 1988 article in the Petoskey News Review. “The bill designates the brook trout as the state fish and alleviates a somewhat fishy problem which has come to the attention of alert legislative anglers. Michigan’s fish is the trout, but experts claim there is no such thing as a generic trout.”

The Brook Trout (Salvelinus fontinalis) is native to Michigan and found throughout the state, thus making it the ideal selection. Turns out it is also a common around the United States as eight other states have declared it their state fish as well: New Hampshire, New Jersey, New York, North Carolina, Pennsylvania, Vermont, Virginia and West Virginia.

When it comes to specific cities in Michigan that are trout-centric, Kalkaska has landed the title as “Trout Town USA.” Best we can tell, the only other city in American with such a designation is Roscoe, NY in the Catskill Mountains.

A mere 3,000 people live year-round in Kalkaska (north of Cadillac and south of Petoskey along US-131 and M-72, between Grayling and Traverse City), but that number quadruples every spring during the National Trout Festival (an annual celebration first held in 1936). Kalkaska is also home to a towering 18-foot-tall “National Trout Memorial” (affectionally referred to as the “Fisherman’s Shrine”) located right downtown in front of the Kalkaska Museum.

According to members of Kalkaska Historical Society, the idea for the memorial first originated in the 1960s. “Three people, sitting around chatting in Dingman’s Tavern in Kalkaska gave birth to the idea on a bar napkin. The idea was taken to the Chamber of Commerce who said they didn’t have the money for anything like that. The fund raising began to make the memorial a reality.”

A July 8, 1965 article in The Leader and Kalkaskian newspaper indicated public awareness for the project and from there, the idea was on a fast track as the memorial began to take shape with the help of several local residents and artists.

Fred Perrin, a high school student, was first approached to sketch the design. Architect Bud Weert drew the architectural design; builder Ben Robinson of Elk Rapids constructed the base of the fountain with plumbing, lights and sprays (the stones for the base came from Torch Lake); sculptor Leo Nelson used a real frozen trout as a model to determine the exact features on a 19:1 scale; and Bill Short assisted Nelson with saws, chisels and sandpaper to shape an authentic replica from a solid piece of foam plastic, which was then sent back to Robinson who made a plastic mold of the fish.

“A fiberglass trout with reinforced steel structure was formed from this mold and returned to Kalkaska where Nelson completed the fish by painting it in brook trout colors,” notes the Historical Society. “The memorial was unveiled with much fanfare at the 30th National Trout Festival, April 1966.”

In 1987, the 21-year-old “Brookie” was removed from its fountain to be repaired, repainted and replaced just in time for the 51st annual festival. It received restoration again in 2004 and 2014 after years of being exposed to the elements, senseless vandals and careless drivers who continued to run into the monument.

And while you might think at 19 feet tall this Brook Trout in Kalkaska is the largest such sculpture in the state…you’d unfortunately be mistaken. In May 2018, “The World’s Largest Brown Trout Sculpture” was erected in Baldwin, Michigan (Lake County), some 83 miles southwest of Kalkaska.

Designed by artist Ivan Iler of St. Johns, Michigan, the 25-foot-tall hand-rolled bent tubing installation sits about 100 yards from the location where the first planting of brown trout was recorded in the United States (no coincidence). According to Troutster.com, “At a park in town they have assembled a small sign with information about the first planting of the trout which reads ‘At this spot…the first planting of the ‘German Brown Trout’ (salmo trutta) occurred from this railroad trestle on April 11th in 1884.’”

Now, when talking about trout and fishing in Michigan, one is obligated to mention a few noted outdoor literary icons who favored fishing for trout and other fish here in the Great Lakes State.

A HISTORY OF MICHIGAN’S STATE SYMBOLS