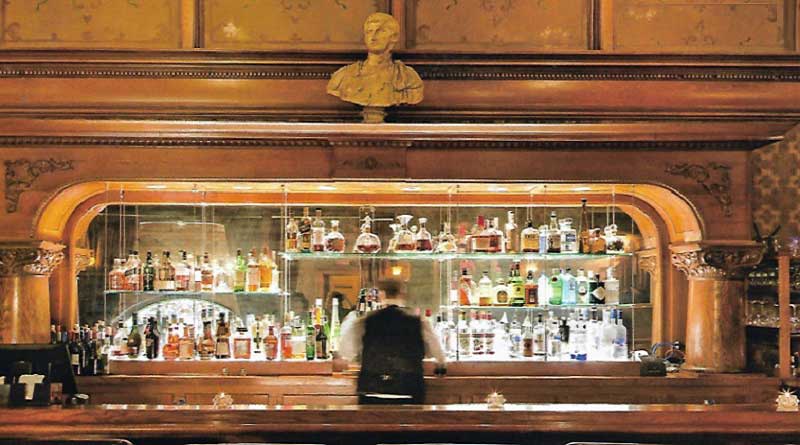 Dozens of Michigan restaurants acknowledge being “haunted,” but only a handful celebrate their spirited side by hosting dinners, tours and events that highlight their ghostly activities.

Flora Whitney desired to live in a mansion. So, her lumber mogul husband, David Whitney Jr., spent four years building one of the grandest homes in Detroit to the tune of about $950,000 (about $23.2 million today). The 22,000-square-foot abode featured 52 rooms, 218 windows, 20 fireplaces, an elevator, world-renowned artwork, high-end furnishings and intricate stained-glass windows crafted by none other than Tiffany’s of New York.

Sadly, Flora passed away midway through the project in 1892, leaving behind her beloved, their four children and her sister, Sara – who, ironically, married David and became the matriarch of this extravagant home. It comes as no real surprise that Flora’s ghost is one of the eternal residents of The Whitney (thewhitney.com), the fine dining restaurant that opened inside the Romanesque Revival-style granite mansion in 1986. Some say David’s spirit also is there, keeping his first wife company.

Twice a month, on the first and fourth Sundays, The Whitney invites the public to engage with the couple during its “Paranormal Dinner Tour” starting with a champagne tour of the home, carriage house and seasonal garden, followed by a 5-course dinner with cocktails.

On Friday and Saturday nights, the “Late Night Paranormal Tour” gives an added element of eeriness as ghost hunters meander the halls in the hours before midnight in search of something unexplainable – like elevator doors opening and closing on their own (sometimes caught on the restaurant’s security camera).

“We didn’t see anything that felt explicitly supernatural, but it was very informative and interesting nevertheless,” said Claire Babala of East Lansing, who toured in April 2018 for her birthday. “I recommend the tour for anyone who appreciates beautiful old homes, the supernatural or history.”

Make sure to visit the third floor Ghostbar, named in 2007 in honor of the lingering spirits, for the signature Witching Hour Martini.

The Whitney mansion is one of the Detroit venues hosting haunted and supernatural events this fall. Tours are offered year-round, are limited to no more than 20 guests and only available for those aged 21 or older.

It is said that The Holly Hotel was a hub of social activity in this Oakland County community in the early 1900s, with as many as 25 passenger trains passing through town daily. In 1908, the hotel found itself at the center of a demonstration by Pro-Temperance leader Carry Nation — one that landed the hatchet-wielding activist in jail. Structural fires on Jan. 19, 1913, and Jan. 19, 1978 (yes, 65 years later to the date and hour), significantly damaged this red brick Queen Anne-style building. There’s quite a colorful and often-tumultuous history of this restaurant, which also is considered one of the most haunted in the state.

Open-minded individuals are invited to take part in the century-old ritual of a “Victorian Séance,” held in the evenings leading up to Halloween. A local medium gathers everyone together in an attempt to contact the spirits within the hotel like John Hirst, the property’s first formal hotelier, or Nora Kane, one-time hostess, whose apparition is most often seen in the bar or back hallway. Everything from the scent of perfume to disembodied voices to music from an unidentified source have been reported during these seances, as well as at other times over the years by staff and visitors alike. Groups are limited for the séance, and all dates sell out in advance, so reservations are required. Participants must be at least 18 years of age.

Overnight guests and diners at the French restaurant inside Henderson Castle Bed & Breakfast in downtown Kalamazoo have reported encounters with the home’s original owners — Frank and Mary (Taylor) Henderson, even though both passed away more than 100 years ago. A Spanish-American War veteran, a little girl and even a dog are among the other spirits said to remain inside this palatial 1895 Queen Anne-style house.

Once a month, the Southern Michigan Paranormal Society hosts a “Haunted History Dinner” complete with a presentation of photos, videos and audio recordings from past investigations; historical insights into the Henderson family; a guided tour of the three-story home and grounds complete with a live electronic voice phenomenon (EVP) session; and a decadent multi-course dinner. If time permits, guests are invited to check out the Spirits Lounge and enjoy one of the cocktails named after the castle’s many ghosts.

While in the neighborhood, also visit the (haunted) Mountain Home Cemetery — across West Main Street — to see the graves of Frank and Mary Henderson. Reservations for the themed dinner and tour are required and guests must be at least 21 years of age or older. ≈