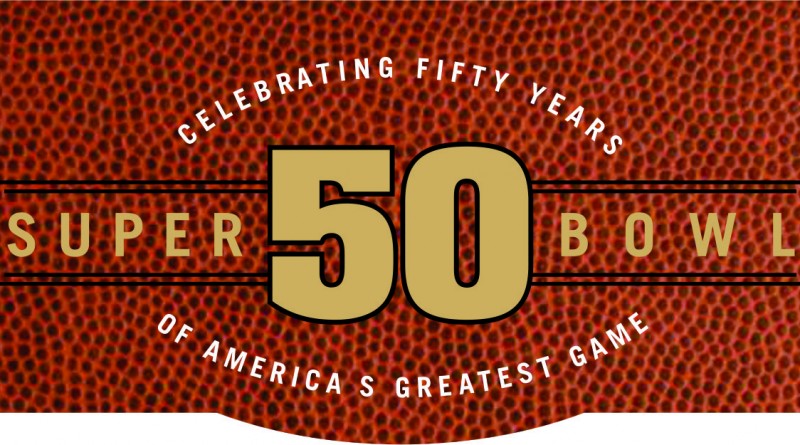 “As a player, it says everything about you if you made the Hall of Fame.
But, then again, boy… there’s something about winning a Super Bowl.” – Terry Bradshaw

Traverse City, MI (November, 2015)—The Super Bowl will reach a milestone on February 7, 2016 with the observance of its 50th “Golden Jubilee” game to be held at Levi Stadium in Santa Clara, California—home of the San Francisco 49ers. In celebration of this milestone, Traverse City-based JKR Ventures has released a commemorative book focused on the long-standing history of “The World’s Greatest Entertainment Event.”

Super Bowl 50: Celebrating Fifty Years of America’s Greatest Game is written by acclaimed sportswriter Bethany Bradsher, with a foreword written by Super Bowl Champion and retired San Francisco 49er Dwight Clark. With 344 action-packed full-color pages, including more than 650 photographs, the book is bound to score with football fans around the world. This must-have book unveils the whole Super Bowl experience, one that most fans could never access.

Jerry Jenkins, founder and CEO of the publishing services firm Jenkins Group, and colleagues Brett Karis and Ron Harris, are investment partners for the book, under the JKR Ventures brand. They in turn partnered with Greenlight Marketing in Traverse City to create the book layout and design.

“I’ve seen a fair number of Super Bowl books over the years, and most of them were written for the football enthusiast,” shares Jenkins. “Not many images, too many statistics, and somewhat bland design and content. We wanted to create a book that not only covers the games, but also captures the cultural celebration that the Super Bowl has become.”

Through never before released anecdotes, photos and facts, Super Bowl 50: Celebrating Fifty Years of America’s Greatest Game brings readers behind the curtain to experience this spectacle in an unprecedented manner. It highlights the games, players and coaches, as well as the diverse activities and fun beyond the gridiron.

Story headlines like “The Clydesdales,” “Super Bowl Party Food,” “Media Frenzy” and “The Evolution of Halftime” illustrate how this book showcases elements of the Super Bowl to which even non-sports fans gravitate. Every page in Super Bowl 50 is guaranteed to bring back a Super Bowl memory (heartwarming or heartbreaking).

“What I first envisioned was a book not just for a sports nut, but for every person who watches the Super Bowl for the halftime shows, commercials, and the ceremony of it all,” says Jenkins.

With over 500 images, “Fun Facts,” a multi-page timeline of all 50 halftime acts, and even a salute to the beloved Detroit Lions (a no-show at the Super Bowl, if you’ve been keeping track), the book content will stand out against any other of its kind on bookshelves.

“We typically collaborate with clients who need marketing assistance – advertising, websites, branding, and the like,” says Kevin Gillespie, owner and creative director of Greenlight Marketing in Traverse City. “But this was a once-in-a-lifetime project, and our entire team of designers and project managers were on board.”

The Super Bowl is much more than just a game, and Super Bowl 50: Celebrating Fifty Years of America’s Greatest Game covers them all:

Author Bradsher comprehensively narrates details about the Super Bowl and all the festivities and pomp around it, offering all fans unparalleled access. In Super Bowl 50: Celebrating Fifty Years of America’s Greatest Game, she’s analyzed the unforgettable plays, players and coaches; even researching how much beer, chips and dips are consumed (and what the consensus is for “Favorite Super Bowl Snack.”)

Two editions of Super Bowl 50: Celebrating Fifty Years of America’s Greatest Game are available: a commemorative hardcover edition, with football grain textured cover material, gold foil, and laces embossed on the spine ($49.95; 0986085006), and a softcover edition ($29.95; 0986085014). Both editions are timeless keepsakes, and were released in September to coincide with the kickoff of the 2015 NFL season. They are available in bookstores nationwide and at www.SuperBowl50Book.com.

About the Author:
A self-described football fanatic who has authored five sports books and covered the Carolina Panthers, Bradsher was a perfect fit to help bring the vision to life. She has been a professional journalist and sportswriter for more than two decades, and in that time she has covered everything from the inaugural two seasons of the Carolina Panthers, to college football, to the rich history of ACC basketball. Bradsher has authored three previous sports books and collaborated on two more, including Broken Road, the story of former New England Patriots standout Tony Collins. She lives in Greenville, North Carolina, with her husband and four children.