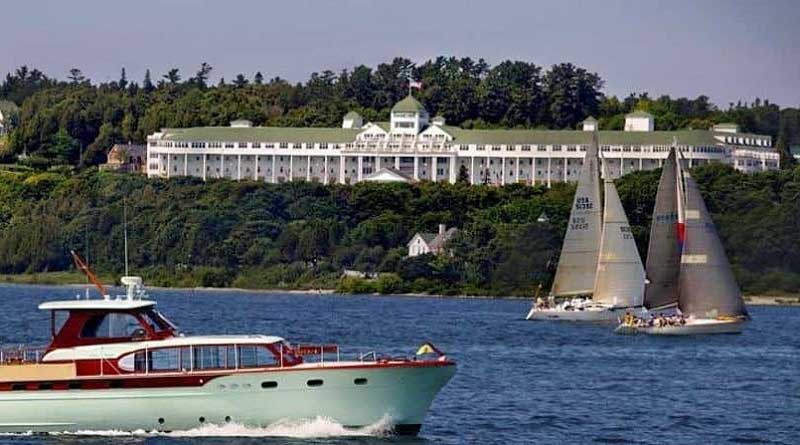 I remember the first time I ever saw the glorious Grand Hotel on Mackinac Island. It was the summer after I graduated high school and before I began classes at Western Michigan University—30 years ago this summer. Little did I know that that Pure Michigan vacation in 1987 would ultimately help shape my personal passion and professional career.

The day-trip to Mackinac was in the middle of our multi-day trip which also took us to Sault Ste. Marie (and The Antler’s) and Beulah in Benzie County for lunch at The Cherry Hut. I don’t remember exactly where we stayed in Mackinaw City (although hit was south of downtown, a small motel along the shores of Lake Huron) or what ferry service we took to the island, but I do remember having the largest platter of nachos for lunch at a downtown pub before making our way to the Grand Hotel. 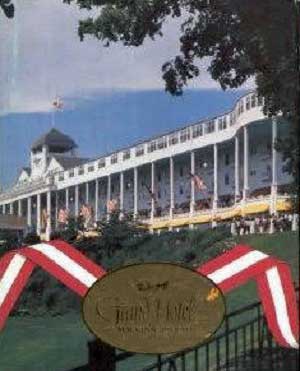 My dad and I walked along the “World’s Longest Front Porch” (at 660 feet) and through the colorful lobby adorned with the interior designs of Carlton Varney. We saw the hundreds (or was it thousands) of geraniums—the hotel’s signature blossom (2500 plants are found in the flower boxes on the front porch alone, with more than 5200 total plants around the property. We went to the gift shop where he bought for me a thick historical book (Grand Hotel: Mackinac Island), which had just been published and remains in my personal collection.

Just seven years prior, the famous movie ”Somewhere in Time” had been released staring Jane Seymour and Christopher Reeve. I’d seen the film a couple times (maybe even on laser disc) and was familiar with the connections to the hotel and the island. I remember being in awe of walking along a “film set” and recounted the experience years later whenever the movie came on television.

For 27 years, a “Somewhere in Time” themed-weekend is hosted at Grand Hotel. This year’s event is October 27-29. I had yet to hear about (or even to this day, watch) the other movie filmed here in 1947: “This Time For Keeps” starring Esther Williams (the swimming pool at the hotel, which takes a whopping 500,000 gallons to fill, is named after Williams). 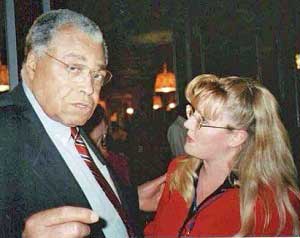 Between 1997 and 2004, I had the pleasure of working at the West Michigan Tourist Association—the oldest, continually-operating regional tourist association in the country (founded in 1917 and celebrating its Centennial this year). One of the perks of that job was to attend the annual state tourism conference—today known as the Pure Michigan Governor’s Conference on Tourism. One year, Michigan’s own James Earl Jones (the voice of CNN, Darth Vader and The Lion King’s Mufasa, among MANY others) was the keynote speaker I was honored to have spoken with him briefly. 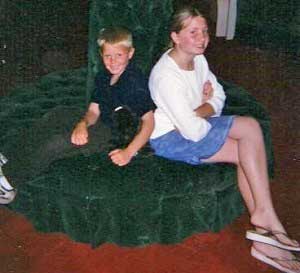 During the summer of 2003, I spent Memorial Weekend up north with my kids. We explored the mainland (both Mackinaw City and St. Ignace), toured the island on an historic carriage ride, took in demonstrations at Fort Mackinac (where my son participated in the cannon demo) and I took them to the Grand Hotel for lunch and a tour.

Not long after I launched Promote Michigan in the summer of 2004, I was invited to attend and help broadcast from the porch of the Grand Hotel during its annual Labor Day Jazz Weekend. Music, fun, food and views made for a memorable weekend to end the summer and welcome the fall season.

In 2014-2015, one of my clients was Hudsonville Ice Cream based in Holland. They’d recently launched a series of Pure Michigan flavors, including Grand Hotel Pecan Ball—named after the signature dessert served daily at the award-winning, internationally-recognized, family-run hotel (over 50,000 served annually). The special ice flavor could be found at retail outlets around Michigan, and was one of the many Hudsonville flavors scooped up each year at Sadie’s Ice Cream Parlor.

Opened in 2013, the shop was after Sadie (Ch. Roundtown Mercedes of Maryscot), a black Scottish Terrier owned by Amelia and the late R. D. Musser (who bought the Grand Hotel in 1979, becoming the second of now three generations to run the iconic property). A famous show dog, Sadie had won the Triple Crown of dog shows— the National Dog Show (2009), the American Kennel Club/Eukanuba National Championship (2009) and the Westminster Kennel Club Dog Show (2010). Sadie had been named “Best of Show” 112 times by the time she retired in 2010; she passed away during the summer of 2014.

My most recent stay was during July, 2015 when I was on the island covering the Bayview to Mackinac Yacht Race. It was quiet a weekend, starting down in Port Huron for two days of pre-race festivities before a day on the road heading north to catch the ferry to the island to get settled in before the majority of boats began to arrive. My room overlooked the finish line and five-mile Mackinac Bridge (opened 60 years ago, on November 1, 1957).

This year, Grand Hotel celebrates its 130th year of serving seasonal guests—including many Hollywood celebrities, U.S. Presidents (five: Clinton, Bush, Ford, Kennedy, and Truman) and other political dignitaries. Check out the impressive list for yourself.

As the world’s largest summer hotel, the Musser family’s Grand Hotel boasts 385 rooms, is a member of Historic Hotels of American, is listed with the National Register of Historic Sites, holds countless other distinctions for its time-honored hospitality and is considered one of the top family-run tourist businesses in the state.

To learn more about the history of Grand Hotel, make plans to attend the 9th Annual Grand Hotel History Weekend, September 15-17. Bob Tagatz, the hotel’s residence historian and concierge, will take guests on a fascinating journey through the history of the island and the hotel. A special presentation is also planned this year from Bruce Lynn, Executive Director of the Great Lakes Shipwreck Museum. He will share the stories of shipwrecks in the surrounding areas, including the Straits of Mackinac.

Earlier this year, Detroit PBS produced and broadcast a 60-minute documentary about Grand Hotel, featuring interviews with third-generation owner Dan Musser III, Tagatz and others involved in the daily operation of the hotel. It is available online for a $72 donation.

Travel has always been a part of my life—from my earliest remembrance at the age of three to our family trip to Gettysburg when I was in elementary school and my first trip to Mackinac with my dad three decades ago to every single other excursion I’ve taken here and abroad.

I like to think my will to travel is genetic…something passed on to me by my grandparents and parents and something that I have instilled in my own adult children. Given my daughter and her boyfriend just returned from a two-week road trip between Michigan and California and my son and his girlfriend are headed on a UP camping trip in the near future, I’d say it’s a time-honored tradition.