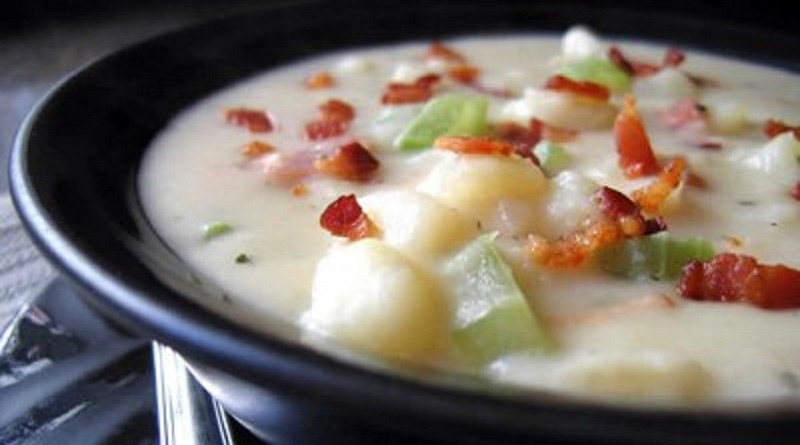 What is your favorite soup? Is it bean with ham or perhaps tomato bisque, cheddar broccoli or chicken noodle? No matter your preference, you’re invited to celebrate National Homemade Soup Day (#NationalHomemadeSoupDay) on Saturday, February 4, 2017 at The Homestead’s “Super Soups” contest.

While homemade soup can be traced back to about 20,000 BC, the word “soup” likely comes from the French “soupe” or “sope” (meaning broth) which comes from Latin “suppa” (meaning “bread soaked in broth” – much as “sop” from Germanic sources). The word “restaurant” was first used in France in the 16th century, to refer to a highly-concentrated, inexpensive soup, sold by street vendors. In 1765, a Parisian entrepreneur opened a shop specializing in such soups, prompting the use of the modern word for eating establishments world-wide.

“We have invited local restaurants to participate in this winter celebration by serving up steamy bowls of their favorite homemade soup recipes, to be enjoyed at stations scattered throughout our Village around Beppi’s,” says Jewell, Vice President of Sales & Marketing at The Homestead. “We think there’s just something warm and inviting about strolling around with family and friends, enjoying mouth-watering soups on a cold winter day.”

The Super Soups will run from 11 am until 3 pm, admission is $10 per person ($5 for seniors and children under 12 years of age) and includes unlimited 4-ounce samples of soup. Guests will also be given a ballot to vote on their favorite soups, with prizes awarded at the end of the day.

All proceeds from the cost of admission will go to Buckets of Rain, a Leelanau County-based organization founded in 2006 by local musician Chris Skellenger (a live entertainment regular at The Homestead). Buckets of Rain pioneered the use of gravity-fed, drip irrigation to help impoverished communities feed themselves in Lesotho, South Africa, as well as Kenya, Guatemala, Honduras and Belize.

Buckets of Rain has now focused its energies on the urban struggles in inner city Detroit. By repurposing 30 vacant lots into food production sites, they have provided hundreds of thousands of servings of vegetables, free of charge, to its partners and neighbors. Through the construction of urban gardens on abandoned city lots, Buckets of Rain has helped diminish urban blight, rekindle hope in struggling neighborhoods, bring fresh produce to the community and feed the homeless.

Restaurants or individuals who are interested in entering their soup into the contest may register by reaching Jamie Jewell at (231) 334-5150 or jamie@thehomesteadresort.com.

The Homestead is Northern Michigan’s largest waterfront resort community located in the heart of the Sleeping Bear Dunes National Lakeshore, the area voted by viewers of ABC’s Good Morning America as the “Most Beautiful Place in America.” Along with its unmatched natural setting and miles of frontage on Lake Michigan and the Crystal River, the resort offers guest pools, tennis and golf in the summer; downhill and cross country skiing in the winter; and shops, restaurants, meeting centers a luxurious spa and salon throughout all four seasons.