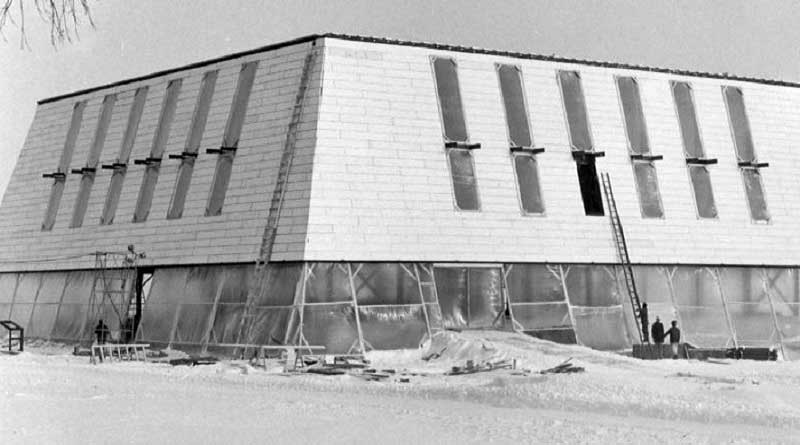 During our most recent trip to Mackinac Island, we had the honor of staying at the newly renovated Mission Point Resort. It was the third time I’ve actually stayed here since 2003, but the first time in the Straits Lodge. It was great to see how the Ware family has been redesigning the rooms and public space since I had recently completed an article for an upcoming issue of Michigan BLUE magazine.

We also were given a sneak peek at the historic Silver Birches, which is located about three miles up the eastern shoreline toward British Landing. Originally built in the early 1900s, this property is undergoing a major transformation to become one of the most unique elegant yet rustic properties in Michigan. More on that in the coming months, I hope.

On our return bike ride from Silver Birches, we opened up the conversation about the “darker” side of Mission Point – the ghosts and witches that shroud its history. 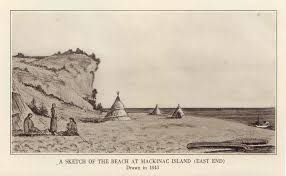 Located on the southeast side of Mackinac Island, Mission Point has developed over the years since the first Europeans landed here in 1634. Neary 200 years later, Protestant missionaries William Montague Ferry and his wife, Amanda, founded a mission along the shores of Lake Huron. In 1825, a three-story wood-framed Mission House was constructed to serve as a place for the American Board of Commissioners for Foreign Missions to enlighten the Native Americans about Christianity (the building still stands and is on both the Michigan and National Register of Historic Places).

As fur trading thrived during the mid-to-late-1800s, followed by a growing tourism industry, the Mission Point area soon boasted several summer Victorian cottages and other homes. The Mission House eventually became a hotel, operating between 1847 until the Great Depression (today, it is owned by the Mackinac State Historic Parks Commission and houses seasonal employees).

In 1942, the Moral Re-Armament (MRA) – an international peace organization, founded ten or so years prior in England and later based in Switzerland – held its first gathering on Mackinac Island. Some describe this group as a “cult” that aimed to mold the world’s morals to their own liking. 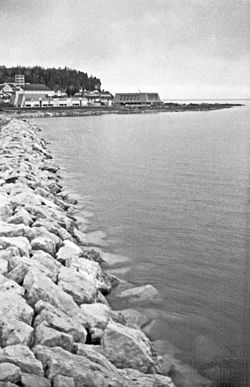 Over the years, MRA conference attendance continued to grow and in 1954, the group decided to purchase land and construct its own conference center. Nine structures were built on the property over the course of 10 years, including a theater (1955), Straits Lodge (1957), film studio (1960), library (1966) and conference center (1967). It was among these buildings that the Mackinac College, a private liberal arts facility operated from 1966 until 1970. It reopened in 1972 as a short-lived bible college operating under the same name. It too, failed to last.

It was during this short blip in history that the first “ghost story” about this area of Mackinac Island surfaced. As the story goes, a male student nicknamed Harvey fell victim to a broken heart and shot himself in desperation…his body not discovered for six months back in the wooded cliffs behind the property. Although it was ruled suicide, there were questions about another person being involved (and rumors of two bullets to the head from a gun that wasn’t found near the body).

Either way, Harvey is said to be an ongoing presence in the theater in the center of the resort property (the same space where scenes from the 1980 film Somewhere in Time were filmed with Christopher Reeve and Jane Seymour). This ghost story even generated attention from the national SyFy TV show Ghost Hunters, who filmed an episode here during the winter months, which aired in 2011. 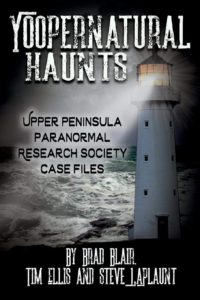 Despite countless websites that reference Harvey’s story, I was unable to find any news articles online about this young man’s tragic death. However, I recently had the opportunity to hang out with a few of the members of the Upper Peninsula Paranormal Research Society (UPPRS) – and they said they have more details (and the real name) published  in their newly released best-selling book Yoopernatural Haunts…and I can’t wait to read all the details!

By the late 1970s, the campus property was sold and became Mackinac Hotel and Conference Center, which was later renamed and has operated as Mission Point Resort since 1987. In the early 1990s, the modern-looking (and then dilapidated) Peter Howard Memorial Library (named for one of the former MRA leaders) was razed to make way for the resort’s now famous lush green shoreline lawn (complete with dozens of bright white Adirondack chairs), an 18-hole executive putting course and Bistro on the Green eatery. According to Liz Ware, whose family purchased the historic property in 2014, it was during this time that a large (and some say deep) natural pond was formed between the putting greens and the rocky shoreline of Lake Huron.

Yet, if you’ve read any online accounts about this pond, you’ll get a very different (and Liz says inaccurate) tale about the “Drowning Pool” of Mackinac. 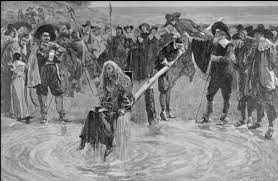 Centuries ago in European countries like England or Scotland, women who were believed to be witches often died in similar bodies of water. These women were strapped into a seat at the end of a sturdy pole or even a see-saw type contraption (often with rocks being tied to their legs) and repeatedly dunked below the water’s surface. It was common belief that if the woman was a witch, she could not be killed by drowning. If the woman died during the act, it was determined she was in fact a mortal (albeit a dead one). If she lived and was deemed a witch, she would have been hung. Clearly, a no-win situation.

Mackinac Island historian and paranormal researcher Todd Clements is referenced in countless web postings, stating that “back in the 1700s and early 1800s when Fort Mackinac was at its heyday, a lot of brothels popped up. Seven women were accused of being witches and enticing unsuspecting solders, fur traders and husbands to their houses. It is said that rocks were tied around their ankles and they were thrown into the lagoon.” 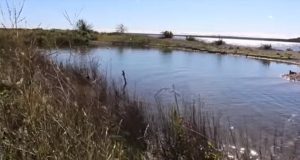 Anyone who has followed my online postings knows that I’m quick to share spirited stories (I am the author of Michigan’s Haunted Lighthouses after all) about ghosts, vampires, witches and the like…so I was a bit disappointed to learn that the “Drowning Pool” at Mission Point was nothing more than “fake news” spread around the internet one site at a time.

I’m not saying that the accounts of dark shapes and apparitions near this pond should automatically be dismissed…even though I’ve never had an experience there myself. The paranormal world is subjective, some are open to it and some are not. There are a lot of gray areas, where the lack of information can be enough “proof” that someone needs to believe.

Yet, history is pretty definitive. Dates in history, photographs of then and now, personal accounts that can be substantiated by multiple individuals are often undisputed. And…based on the cursory research I’ve done I haven’t found any documentation of witches or brothels on Mackinac Island (except one headline from a MRA article referencing communists and brothels during their era).

If you have any solid information to the contrary, I welcome you to share it!

For now, the only “spirits” I’m prone to find at Mission Point Resort are those served at the bars and restaurants that cater to the global visitors throughout the property’s seven-month season!

For more about the early history of the Mission Point area: https://www.mackinacparks.com/mission-point-began-as-conference-center-and-college/