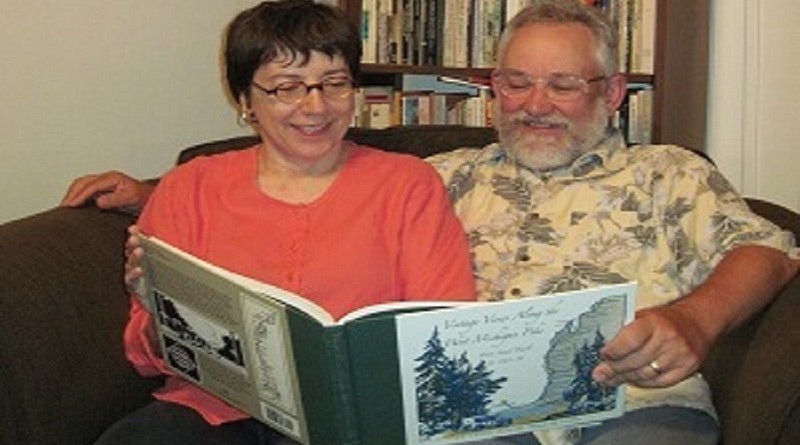 For the past dozen years or so, I’ve been a treasure hunter – seeking unique Michigan travel items to decorate my home and office. From postcards and vintage maps to weathered road signs and license plates to books and board games, I’ve found some great items – each with a story to tell. A love of collectables comes from my father and grandmother, but inspiration has also come from two special friends who have helped me embrace my love of all things Michigan!

When curators at the Michigan Historical Museum were looking for unique items to enhance their “Michigan’s Roadside Attractions” exhibit in 2007, they went straight to two of the best private collectors in the state – Christine Byron and Tom Wilson. More than 400 pieces were ultimately loaned.

Authors of the Vintage Views series of books, Chris and Tom have amassed an impressive (and organized) collection of Michigan travel postcards, travel brochures, maps, pennants and other hard-to-find items such as linen map tablecloths, pillowcases and so much more.

For years, Chris and Tom vacationed within a mile of each other in the Sleeping Bear Dunes National Lakeshore. Yet, it wasn’t until 1992 that they first met. With a common passion for collecting vintage Michigan mementos, the two set out on a journey throughout the western half of the mitten state. Their trips would take them to historic sites and trails, in search of stories to be told – through the pages of the past. 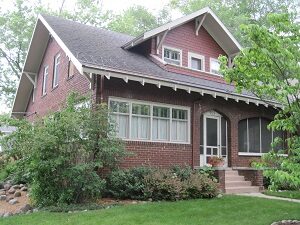 Tom and Chris have converted their East Grand Rapids bungalow – a side-gabled Craftsman-style home – into a cozy testament to their love of Michigan. Situated on a corner lot, the house sits on property with deep rooted history.

In 1835, a land patent was granted to Lewis and Ezra Reed – for whom nearby Reed’s Lake is named. The 112-acre property later became part of the Burchard Farm. Mary Burchard sold the property in 1886 to the Michigan Masonic Home Association for a mere $10,000.

The association later sold most of the land, retaining just 32 acres on which a Romanesque, three-story Michigan Masonic Home was completed in 1891 to house “aged, decrepit or destitute Masons, Mason’s widows and orphans” to offer them “moral, physical and intellectual culture.”

The Home itself boasted offices, a library and reading room, kitchen, large dining room, schoolroom, amusement room, 50 chambers for beneficiaries and servants’ chambers, among other amenities. Stretching out around the grounds was a vineyard, orchard, garden and farm for livestock. Outbuildings include a frame barn, wagon shed, corn-crib, hog house, a small frame cottage, gas engine house and brick boiler house.

The house operated for less than 20 years, before a devastating fire destroyed the main house. At that time, the Masons chose to rebuild in Alma and sell the East Grand Rapids property. In all, 136 lots were platted ranging in price from $550 to $650 and within just a few weeks, all had sold in what was reported as “one of the quickest closing out of high grade lots of any put on the market in many years.”

Charles and Ina Kelley originally purchased lots 113 and 114, but later sold 113. Their two-story craftsman-style bungalow, build on the remaining lot, completed in 1913, was one of the first on the block. The Kelleys lived in the home until 1919, when it was sold to Albert and Alice O’Neill. The home remained in the O’Neill family (later daughter Dore and son-in-law Oscar Feltz lived there, with their daughter, Nancy) until 1989, when it was sold to the Milanowski family.

It only makes sense that when Chris and Tom sought out their dream home, they would find one that had a great story to tell. The purchased the home and moved in on January 1, 1998.

“We are lucky to be only the fifth owner of the house in its history and fortunate that the house was taken care of so well,” Tom says. “We have long been bungalow aficionados and are happy to share our affection for our house with others.” When the docents of the Meyer May house were looking for an example of a craftsman style house that was built in the same time period as the May house, Chris and Tom opened their home for a tour and related its history to the docents. 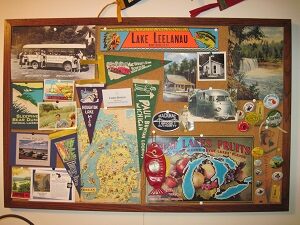 “It also shows the Glen Lake Country Club, which opened in 1925 and closed around World War II,” says Chris. That site is the location of Chris and Tom’s cottage.

Off the kitchen, an office holds long rows of shelves of three-ring binders holding thousands of postcards, cataloged by theme and city. Tom estimates there are well over 25,000 postcards in their collection – including three purchased at various postcard shows that have been sent to or from members of his family. 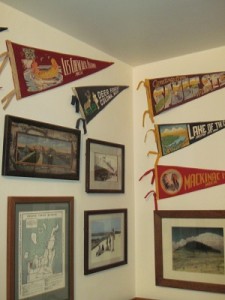 Their four books are also proudly displayed, each showcasing the breathtaking beauty of its respective region and boasting hundreds of historic postcards, photographs, newspaper articles, early travel guides and brochures of days gone by, from the 1890s through the 1960s.

The first book to hit the market was, fittingly, Vintage Views of Leelanau County, in 2002.

The inaugural title was recognized as a Michigan Notable Book and also won an award from the Midwest Independent Publishers Association.

The latest title in the series is Vintage Views Along the West Michigan Pike, which was released in June 2011 from Arbutus Press.

One of Michigan’s oldest travel routes, the West Michigan Pike, later M-11, and now US-31, was the first continuous, improved road between Michigan City and Mackinaw City, often following the Lake Michigan coastline. It was this route that opened West Michigan to automobile travel, helping to shape the state’s burgeoning tourism industry.

“The book depicts the adventure and romance of motoring on Michigan’s most prominent early highway,” Chris says. “Vintage postcards, photographs, maps, and ephemera illustrate this journey as you time-travel through the beautiful West Michigan landscape and quaint towns to hotels and cabins, tourist camps and state parks, and other stops along the road.”

Fittingly, Chris is the Local Historical Collections Librarian at the Grand Rapids Public Library in downtown for 10 years – describing it as her dream job. Prior that that, she worked in the book selling industry. Her first postcards were of Glen Lake, where she rented a cottage during the summers.

Through her years of research of the Michigan Tourist and Resort Association (now West Michigan Tourist Association), Chris gathered extensive information about one of the organization’s most noted leaders and later published an article for the Grand River Valley History titled “Hugh J. Gray, Dean of Michigan’s Tourist Activity.”

Tom has been retired from Sears for six years, after serving 38 years with the company. Today, he operates Vintage Views – which provides prints of Michigan and the Great Lakes adapted from travel guides, maps and brochures.

Currently more than 60 designs are sold in 40 retail outlets around the west side of the state, from Chicago to Mackinac Island (as well as online at www.vintageviewsprints.com). An elegant reprint of the Grand Hotel is even for sale in the famed hotel’s gift shop. Introduced last summer, it is one of Tom’s most popular selling prints.

On select summer weekends, you’ll find Chris and Tom touring around the state in their 1973 MGB sports car (they also have a soon-to-be restored 1960s Austin Healy) or relaxing at their cottage on Glen Lake on the Leelanau Peninsula where they spend time fishing, as well as visiting area bookstores and nearby antique stores in search of new treasures.

Reprinted from the autumn 2011 edition of Michigan HOME & Lifestyle Magazine