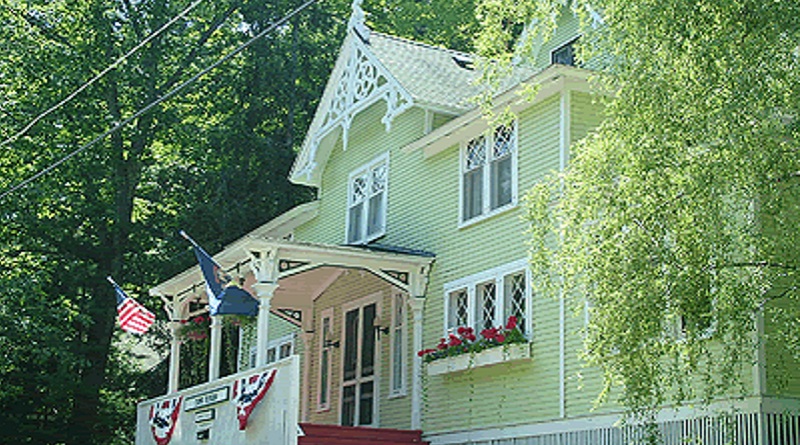 Walking down the tree-lined drive at Camp Tosebo, you can almost hear the chatter of boys being boys…escaping the heat of the city for a summer away in Northern Michigan. Nearly one hundred years ago, the sounds of energetic young campers could be heard scurrying about. Skipping stones; rowing boats; catching fish, frogs and turtles; roasting marshmallows over a campfire. Such experiences are waiting to become reality, once again, at Camp Tosebo in Manistee. 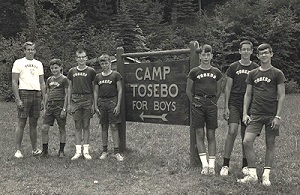 Listed with both the Michigan and National Register of Historic Places, Camp Tosebo was one of the first summer camps in America. Founded by Noble Hill in 1912, it operated as the private summer retreat for the Todd Seminary for Boys out of Woodstock, IL. The name, created by taking the first two letters of each word of the school’s name: To-Se-Bo.

Camp Tosebo sits adjacent to Red Park – one of the first summer resort colonies in Michigan, founded in the late 1800s along the south shore of Portage Lake in Onekama Township by Manistee landscape architect C.G. Davis. The original resort boasted a bandstand and a small store, operated by James Sandenberg and his wife – the resort’s only permanent residents, who were also caretakers of the collection of small summer cottages. The neighborhood was also home to summer resort area Wick-A-Te-Wah – founded by H. Ward Leonard in the early 1900s and the Portage Lake Bible Camp.

Each summer, boys from all over the country traveled to Camp Tosebo by bus or ferry to explore the 50 acres of preserved woods and to march quietly through Red Park to the sandy beach of Portage Lake for a day of sailing, canoeing, swimming, fishing and relaxing. The Todd school closed in 1953, and operations at Camp Tosebo were reduced to an eight-week program – under the auspices of Hill’s daughter, Carol Fawcett, and then his grandson, Ross Taylor.

The camp closed in the 19970s and was then sold to former Camp doctor David Wild Sr. Ten years later, Wild’s son, David – along with his wife, Lulu Garigiulo – restored several of the buildings and operated them as a bed-and-breakfast resort for a period of years. When the Camp came up for sale again in 2002, it attracted the attention of developers who wanted to constructed more than a dozen houses on the property, with associated condominium amenities, ultimately altering the character of the historic property.

Yet, it was a dedicated group of family and friends (Mark and Martha Schrock, Steve and Kris Darpel, Kim and Joe Perrin (Mark’s sister and brother-in-law) and Dave (a former Tosebo camper) and Fran Wallace (a Tosebo ‘kitchen girl’) – who banded together to acquire the property and bring Camp Tosebo back to life.

“We spent two years working with Dave and Lulu, developing a plan to place more than 40 acres under a conservation easement affiliated with the Grand Traverse Regional Land Conservancy, with the ultimate goal of preserving not only Camp Tosebo but the surrounding Red Park Community,” said Mark Schrock. “We and the Darpel’s purchased property across the street in 1996 and built a cottage that we all share, so we were familiar with the neighborhood and the camp’s history.” 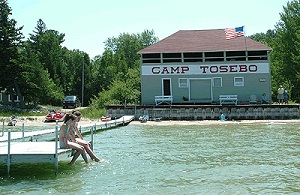 While the Wild and Garigiulo had restored three main buildings – the Clubhouse, Welcome House and Trunk House – the other structures were in need of attention from the new owners.

“We started by restoring the Boathouse, then the cabins and outhouses – which needed flush toilets, the tennis courts and several small outbuildings,” Mark said.

Today, the two-story Welcome House is outfitted to comfortably sleep 6 -8 people, with two bedrooms and a couch that converts to a bed in the living room. Ideal for a midsized family, this charming cottage features a fully stocked kitchen, living room with a brick fireplace and separate dining room. 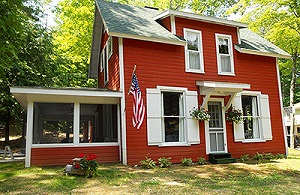 Originally built as a dance pavilion, the 1893 Victorian-era Clubhouse with its covered porch easily accommodates 17 guests, with nine bedrooms and 7½ bathrooms, with antique claw-foot tubs. There’s plenty of space to spread out through the fully-equipped chef’s kitchen, dining hall, game room, library and large living room with a stone fireplace. The motto painted on the mantel is a constant reminder of the philosophy of Tosebo’s founder “There is Nothing so Kingly as Kindness” – taken from a poem titled Nobility by Alice Cary (1820-1871).

“This house really is perfect for families and groups looking to create lasting memories,” Martha said. “The game room is on one side where children can play board games or assemble puzzles, while the library is on the other side, offering a quite refuge to curl up with a good book.” 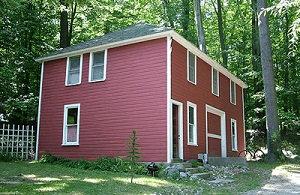 The rustic Trunk House – which once was a storage facility for the campers’ luggage – is a large, one-room studio with vaulted ceilings, living and dining areas, kitchenette, queen bed and twin bed, and a bathroom with a claw foot tub and separate shower.

Several camp landmarks have been preserved for future Tosebo generations, including a sign that reads “HO FOR TOSEBOLAND” that hangs from the arch on the trail that led to the cabins, activity areas and the Council Ring. The sign has been restored in memory of Hal Tonkins, owner and director Camp Tosebo from 1963 to 1972.

Another noted landmark is the Council Ring itself.

“Noble Hill wanted to incorporate a Native American theme into Camp Tosebo, and while at the 1934 World’s Fair in Chicago he met Chief Whirling Thunder of the Winnebago Tribe – who actually visited the Camp and suggested that a separate area be created and used exclusively for the ceremonial dances,” said Dave Wallace. “When we acquired the property, you could walk right past the Council Ring without realizing that it was there. There were a few remnants of the old benches, and after several hours of weeding and raking we eventually found the painted stones of the Ring. They were mostly still in place, but buried under six inches of dirt!”

The Council Ring is still considered the most sacred place of all at Camp Tosebo and was carefully decorated for the Reunions of 2005 and 2009.

Today, Camp Tosebo welcomes newcomers as well as countless groups of former campers who are looking to relive their youthful days in Northern Michigan. Whether enjoying the woods for hiking, mountain biking and wildlife viewing or the waters for boating, swimming, fishing and sunbathing, or the countless other activities on premise or off, one thing is certain – Camp Tosebo has held tight to its traditions of simple pleasures in an historic and natural setting. www.Tosebo.com | www.Tosebo.org

Other historic resorts of interest in Northern Michigan include: 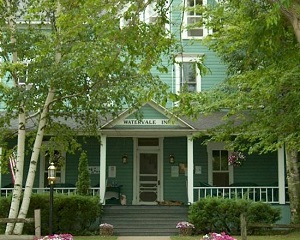 Arcadia’s Watervale was built along the shoreline on both Lake Michigan and Lower Herring Lake in 1892, as a company town of the Leo Hale Lumber Company. The company went bankrupt the following year – during the Panic of 1893 – leaving behind a sawmill, boarding house for single men, post office and eight houses for married loggers.

Essentially reduced to a ghost town, the property was occasionally used by independent loggers and was even the hunting camp for a Michigan Supreme Court Judge. Then, in 1917, Watervale found new life thanks to Dr. Oscar Kraft – a Chicago ophthalmologist who bought the entire town as a summer retreat for his extended family.

In 1960, Vera Kraft Noble and her husband, Vernon, purchased the property from her uncle – establishing it as one of Michigan’s premier historic summer resorts with nearly 20 cottages of varying sizes, the inn and the annex – which include breakfast and dinner as part of the lodging package.

Now owned by Vera’s three children – with her daughter, Dori Noble Turner, serving as innkeeper, Watervale opens in early June and operates through Labor Day weekend. The resort is listed with the Michigan Register of Historic Places and is a National Historic Landmark. www.WatervaleInn.com. 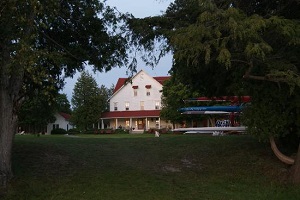 Established in 1889, Fountain Point is situated on 54-acres of manicured lawns and woodlands along the southern shore of Lake Leelanau. Its name comes from the sparkling waters that flow here thanks to French fur trader Andre de Beloit, who had hopes of finding oil instead. Lydia Morrison of Cincinnati purchased the property and welcomed her first guests by steamboat and buggy in 1889.

The resort was a bustling summer destination, operated by Morrison’s daughter, Florence Whitfield, before being sold in 1912 to Albert Meafoy – a relative and vaudeville actor. Under his tenure, Fountain Point added its cottages, each with indoor bathrooms, and the resort flourished. Longtime resort guest Victor A. Gebhardt purchased the property in 1936 and it is his granddaughter, Susan, who now owns the classic summer resort.

The hotel is furnished with period antiques and boasts a new breakfast room; large game room with pool table, ping pong table and foosball; three sitting rooms with fireplaces; and a long wrap-around veranda facing the lake. Nineteen refurbished cottages, ranging in size from one to seven bedrooms, provide a variety of lodging options for family and friends.

Fountain Point is listed with the Michigan Register of Historic Places and is a National Historic Landmark. www.FountainPointResort.com.

Reprinted from the summer 2011 edition of Michigan HOME & Lifestyle Magazine.