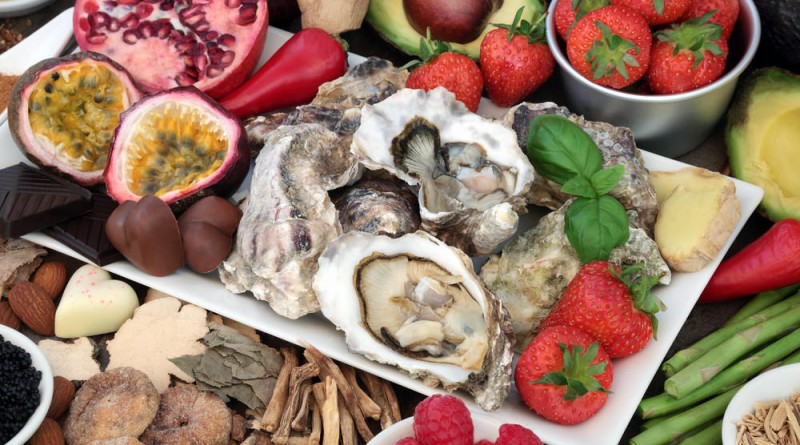 Throughout history, food has served as one of the great sexual indulgences. Aphrodisiacs – named after the Greek Goddess of sexual love and beauty,  – are substances that lead to the awakening of internal desires. In the form of smells, drinks and foods, aphrodisiacs trigger chemical reactions in the brain, which in turn lead to the stimulation of the sexual organs of both men and women and intensify one’s urge to engage in pleasurable physical activities.

Now, some foods are simply sweet or hot and spicy, delivering an overwhelming sensation of flavors, textures and aromas which can create the most arousing effects. While others have proven nutritional effects which can stimulate or recharge the body, and are thus believed to enhance the physical attributes of love, lust and sex.

Cleopatra tantalized Mark Anthony and Emperor Julius Caesar with aphrodisiac scents and “potions” made with cinnamon, cardamom and basil that were said to drive her male suitors wild. Figs were also said to be her favorite delicacy.

The food of choice for Catherine the Great of Russia was caviar and she is widely quoted as once saying “Bring me some caviar, and tonight at supper, send me the best built of my officers.” In 19th-century France, bridegrooms were served three courses of asparagus at their prenuptial dinner, to aid in wedding evening bliss.

In the 2008 movie Sex and the City, an always-sexually-charged Samantha Jones (Kim Cattrall), tried to surprise her boyfriend for Valentine’s Day by laying naked on the table – her body covered only in pieces of hand-rolled sushi (watch out for the wasabi).

As you prepare your romantic Valentine’s Day dinner, consider a menu of these tasty aphrodisiacs and see how lucky you get!

Asparagus — Michigan is a leading grower of this member of the lily family, which is said to stir up lust in both men and women. Maybe it’s the phallic shape, but this vegetable is chock full of vitamin B6, vitamins A and C, fiber, potassium, thiamin and folic acid – which is said to widely known to boost histamine production needed for both sexes to reach orgasm.

Almonds — Regarded as a symbol of fertility, the aroma of almonds is said to arouse passions in females. With abundant doses of vitamin E, fiber and magnesium, they’re sure to generate energy to keep you going all night long.

Aniseed — Sucking the seeds is said to increase the female libido.

Avocados — The Spanish found this voluptuous fruit so obscenely sexy that Catholic priests prohibited their consumption. The Aztecs’ name for the avocado tree was Ahuacuatl – or “testicle tree” – because the fruit hanging in pairs was said to resemble the male’s “crown jewels.” Said to be associated with male sexuality – despite the fact that cut and pitted it resembles a feminine shape – avocados are high in folic acid, vitamin B6, potassium, omega-3 fatty acids and oleic acid.

Bananas — Shapely and nutritional, this fruit is loaded with magnesium, B vitamins and potassium, as well as chelating minerals and the bromelain enzyme which are known to enhance the male libido. Hindus regarded the banana as a symbol of fertility, while Central Americans drink the sap of red bananas as a well-known aphrodisiac.

Basil — Considered a royal herb by the Greeks and noted as a token of love in some parts of Italy, this fragrant member of the mint family has an aroma so potent that it is believed to cure headaches. Basil is said to have a warming effect on the body, while at the same time promoting circulation.

Caviar — Fish and their by-products are linked to the myth of Aphrodite – the Goddess of Love. Persians were the first eaters of this tiny, salty delicacy – calling it chav-jar which loosely translates to “cake of power.” Caviar is believed to cure a variety of ailments and improve stamina and because of the highly-medicinal properties it enhances nerve cells and heightens romantic instincts.

Celery — Containing androsterone (a male hormone), this female aphrodisiac is believed to increase sexual arousal and desire in women.

Chili — This natural aphrodisiac contains capsaicin, which is a chemical that releases endorphins in the body and stimulates the nerve endings, making the body highly sensitive to even the lightest touch, while also increasing one’s pulse.

Fois Gras — A food of luxury, often depicting wealth and fine living, this decadent delicacy boasts a smooth, butter texture. Considered to be an aphrodisiac, given its perceived ties to the well-to-do lifestyle status, it is sure to put you in a rich and a sexy mood.

Garlic — One of the oldest aphrodisiacs on record, despite its pungent aroma, eating raw, crushed garlic is believed to increase men’s sexual desire.

Ginko — Both the leaves and seeds are said to arouse a woman vaginally and heightens orgasms.

Ginsing — This energy-enhancing herb, with its mild stimulating effect, is known to resemble the male organ and even its name means “man root.” Ginsing also relieves stress and opens up sexual possibilities.

Honey — Known as the nectar of Aphrodite, this sweet, sticky, buttery treat is one of the most seductive foods available across the globe. It’s natural sugars contribute to increased energy, as the B-vitamins, enzymes and amino acids help pump energizers through your system. Honey is as much a sensual experience (especially when drizzled warm over one’s body) as it is a delicious indulgence (such as rubbing it into the skin or, well, consuming it from off the body).

Oysters — Casanova is said to have eaten 50 raw oysters every day – the most commonly known aphrodisiac. Research reveals that raw oysters are very high in zinc – which raises sperm and testosterone production, thus boosting libido. They’re also full of omega-3 fatty acids – which increase one’s overall well-being and are known fight depression. And as a bonus, they’re a source of dopamine – that gratification feeling that one gets during “The Big O.”

Vanilla — When someone refers to “vanilla sex” it is meant to convey a sense of ordinary. But, ironically, vanilla flavors and scents actually deliver an overwhelming euphoric effect – on both genders. As far back as the 1800s, the scent of vanilla was said to increase a man’s sexual propensity and more recently, a study conducted at the Chicago’s Smell and Taste Research Foundation found that vanilla beans are one of the best aphrodisiacs for men. If consumed, vanilla can help one overcome sexual debilitation and improve the performance of the central nervous system. Add a few drops of vanilla essence into steaming hot bath water, use a vanilla based oil for a full body massage, light vanilla scented candles or as an added treat, try adding a few vanilla beans to a glass of champagne.

Wasabi — This Japanese horseradish increases blood circulation in the body and stimulates the nerves of the body, especially in women. Of course, many believe that sushi itself has aphrodisiacal effects.