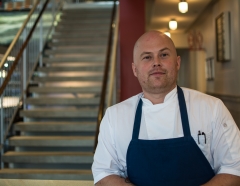 Chef Adams started his culinary education early. At the age of ten, his mother enrolled him in his first cooking class and from then on, the kitchen beckoned. Adams cooked throughout his childhood with his mom and grandmother, who encouraged his creativity and curiosity. His mother—a poet and amateur photographer, and father—a successful businessman, both nurtured his innovative spirit and instilled a strong work ethic.

Adams recalls a pivotal turning point in his career. “I went to Charlie Trotter’s to celebrate my birthday and had the luxury of dining at the Chef’s Table in the kitchen. Witnessing a professional kitchen operate at such a high level—so seamlessly—changed my perspective on what it meant to be a chef, forever.” Before leaving, he spoke with Chef de Cuisine Matthias Merges. Recognizing the potential in Adams, Merges offered him an internship position, which Adams eagerly accepted.

Committed to a career as a chef, Adams attended both the French Culinary Institute as well as Illinois Central College’s culinary arts program. He supplemented his scholastic studies with several internships (Alinea, Revolver) and outfitted his home kitchen to professional grade to further his knowledge.

In 2007, Adams worked at Vie restaurant in suburban Chicago under Chef Paul Virant; a chef known for his farm-fresh approach. Along with Chef Virant and Chef Trotter, Adams recognizes Heston Blumenthal, Pierre Gagnaire, Alice Waters and Ferran Adria as major influencers in his career.

These mentors helped Adams to shape his style, one that is a unique blend of farm-direct and molecular gastronomy. Applying progressive techniques to pristine ingredients, Adams seeks to preserve and accentuate the natural properties of the ingredients through precision cooking.

“With the development of each dish, I take into consideration the aroma, taste, texture, temperature, color, shape and arrangement to bring about the best possible result for the customer,” he says.

With his passion for seasonal and locally-grown products firmly rooted, Adams left Chicago in the spring of 2008, returning to his hometown—an area surrounded mostly by farms—to open his progressive, farm-direct June Restaurant.