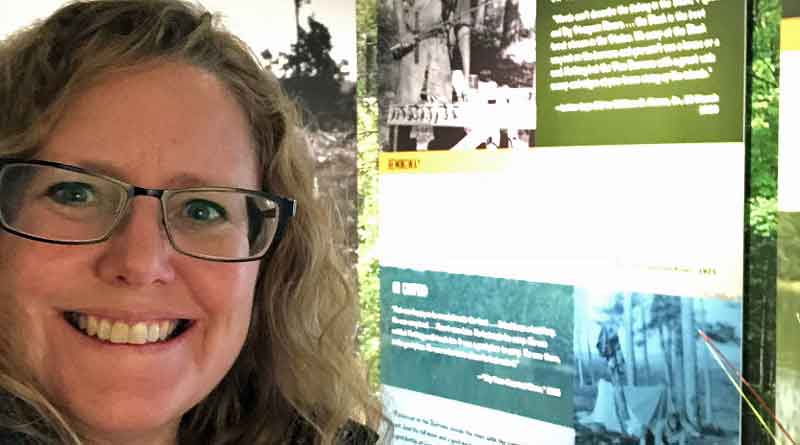 (PETOSKEY, Mich)—The Michigan Hemingway Society has elected Dianna Stampfler, president of Promote Michigan, as its latest board member. The action was taken at the organization’s annual meeting on Sunday, October 7, 2018 at The Terrace Inn in Bay View.

Stampfler first wrote about the Nobel and Pulitzer Prize winning author in 2013, when she published a piece entitled “Discovering Hemingway’s Northern Michigan” in the spring issue of Michigan HOME & Lifestyle Magazine. In late 2014, she met and interviewed Christopher Struble, president of the Michigan Hemingway Society, for an article that appeared in the summer 2015 issue of Michigan BLUE Magazine about the author’s annual birthday celebration.

“From that first time talking with Chris, my causal fascination with Ernest Hemingway turned into an instant addiction. I began reading works he’d written, books and articles about his life, family memoirs and even fiction based on his life,” Stampfler says. “I also began visiting places that were important to Hemingway…including those literally in my back yard around Walloon Lake, Horton Bay and Petoskey. This year, I also spent time in Key West and Oak Park trying to learn more about Ernest and his passion for life, writing, eating and, of course, drinking.”

The Michigan Hemingway Society has been active since 1983 and was incorporated officially as a non-profit organization in 1993. Made up of university professors, writers, high school teachers, fly fishers, journalists and all kinds of other people who are interested in exploring the life and body of literature created by this award-winning author.

“I am very much looking forward to learning more about Ernest Hemingway from the esteemed board and members of the Michigan Hemingway Society,” says Stampfler. “But, more importantly, I’ll be looking for ways to extend our outreach to educators, naturalists, conservationists and other armchair enthusiasts to make sure Hemingway’s legacy is not forgotten in future generations.”

Stampfler has more than 25 years of PR, marketing, event planning and writing experience, having launched Promote Michigan in August 2004. She is a member of the Historical Society of Michigan, Great Lakes Shipwreck Historical Society and the United States Lighthouse Society. In spring 2019, she will release her first book, “Michigan’s Haunted Lighthouses,” from The History Press. Stampfler also works closely with several organization around the state including the Michigan Brewers Guild and the Michigan Craft Distillers Association, among many others. She holds a bachelor’s degree in English with Emphasis in Community Journalism and Communications with Emphasis in Radio Broadcasting from Western Michigan University. A native of Plainwell, Michigan, she currently resides in Walloon Lake.

Membership in the Michigan Hemingway Society is $20 per calendar year for an individual, $30 for a family (two adults at the same address) or $10 for students. Benefits include a reduced fee for the annual MHS weekend conference, a printed copy of the MHS newsletter and periodic email updates of MHS news