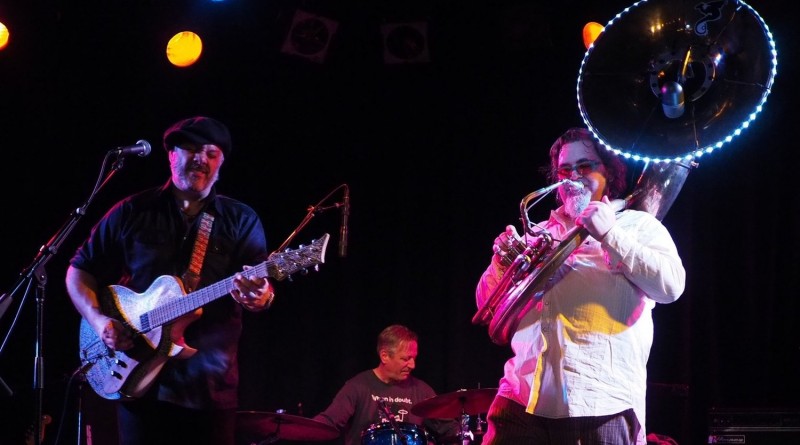 Saugatuck Center for the Arts to Host a Multi-Media Expression of Collaboration Kick-off Celebration on Friday, February 15, 2019

(Saugatuck, MICH)—The Michigan-based musical trio, The Strapping Owls, have announced the release of their debut album – Live Wire Soul – and a two-week Michigan-to-New Orleans tour to promote said album. The tour begins on Friday, February 15 at the Saugatuck Center for the Arts.

The Strapping Owls have a unique sound, blending electric guitar, drums and sousaphone as the bass—drawn on influence from the blues, rock and roll, New Orleans brass bands, Motown and funk. Their original songs are driven forward by the composition and expressive, soul grabbing voice of Nicholas Barron, whose deep bluesy tones, dynamic guitar and heartfelt lyrics, are pulsed forward with driving, colorful drumming from Larry Beers and the groove making, funky, rock and roll sousaphone of Fred Bueltmann.

Bueltmann, who lives in Fennville, has a storied career in Michigan beer and spirits industry, recruited Barron and Beers, old friends who are career musicians in nearby Chicago.  The trio who started casually, playing “pickup gigs” around industry events, grew into a band around their mutual love for spontaneity — playing in the moment — and communicating with each other through music.  This exciting, unpredictable, improvisational and soulful musical signature became known as “Live Wire Soul.”

The band began creating collaborative arrangements of Barron’s original songs, as they began playing bigger, notable Midwestern stages, including Earthwork Harvest Gathering in Lake City, Navy Pier in Chicago and Summerfest in Milwaukee, along with plenty of breweries, smaller clubs and “listening rooms” across the Midwest.

Inspired and committed to capturing the energy of their live performances, The Strapping Owls took an atypical approach to recording their first record, and chose to put out a live album, based on recordings from their “Solstice Jam 2018,” a mini-tour in West Michigan over the Summer Solstice.

“When we imagined our first record, we kept coming back to the idea of a live recording,” Bueltmann recalls. “We wanted to do our best to capture the rare moments and musical conversations that are part of our live performances. We took our dear friend and sound engineer, Tim Julian, on the road to record what felt like a multi-day fishing expedition. There was no guarantee we’d come back with anything useful, but we took our chances and are proud to present our debut-album, Live Wire Soul.”

The album was co-produced by Bueltmann and Dominic John Davis – a notable musician and producer, and Jack White’s long-time bassist and bandleader. Davis lives in Nashville, but has Michigan Roots, including co-founding Steppin’ In It with longtime collaborator, Joshua Davis. Dominic’s recent credits include producing the latest Greensky Bluegrass release All for Money.

“I played a show with Nicholas Barron years ago and started keeping track of what he was up to, hoping a chance to work together would appear,” Davis reflects. “We’re in a strange time for music. There are a lot of solo acts with monikers and hired guns and a lack of bands. That’s what I first noticed about The Strapping Owls: they’re a proper band in every sense.

“They’ve got many sides to them.  A very sweet and melodic side, but also a very wild side that wants to color outside of the lines – musically and lyrically, as well. Nicholas can be very sweet and touching but doing so while delivering a powerful message that might be difficult to hear.”

Live Wire Soul was mixed and mastered by Tim Julian, with album design by Kent Elliott of Black Lab Five in Kalamazoo and photography by Kyle Bice.

The band is heading out on a two-week tour to New Orleans and back to support the album, celebrate the accomplishment and take a bold step forward as a group. Their release event is a multi-media expression of collaboration and artistic expression at the Saugatuck Center for the Arts (SCA). They will be joined by area artists to not only exhibit but create art live and in the moment with the band, and with the crowd. The show includes a walking gallery, that will include special guest Dede & The Dream, a duo made up of singer-songwriter and percussionist, Dede Alder and Joshua Holcomb on the Viola.

“We love the theater setting and are inspired by artists of call kinds and crowds who lean forward, and listen in, appreciating the vibe of it all,” Bueltmann shares. “As somewhat seasoned artists, we’ve also come to realize that this isn’t just for us. In a way, we’re advocating for people to not only find their voice, but to experience the joy and release of learning how to express it.  Our show at the SCA will include from-the-stage conversations with various artists and collaborators, sharing perspective on the value of artistic expression and how people can bring it into their lives — performers or not.”

Following their opening night at the SCA, The Strapping Owls head south on a two-week (nine venues, nine states, eight cities) adventure during which time Bueltmann will celebrate his 50th birthday (while in New Orleans). 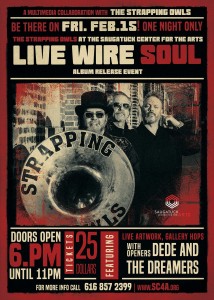