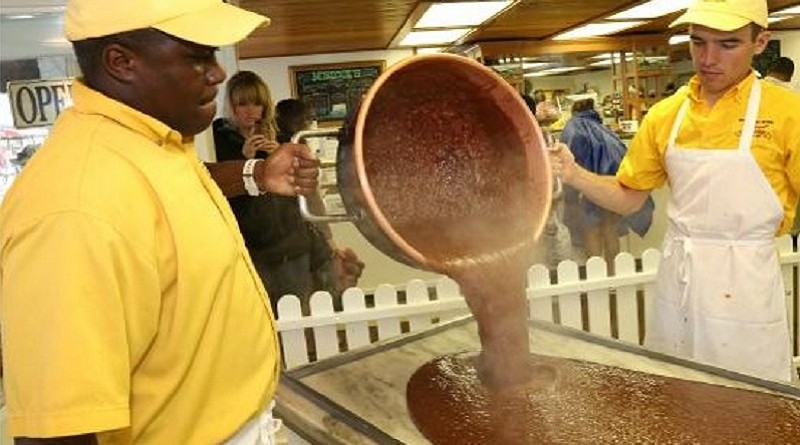 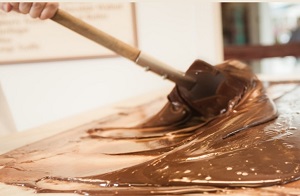 is home a dozen fudge shops within a 3.8 square mile radius. Fudge makers ship in about 10 tons of sugar per week (80% of which comes from Michigan) and 10 tons of butter per year to make fudge. In peak season, 10,000 pounds of fudge leave the island each DAY!

While fudge was not invented on Mackinac Island, over time the two have become synonymous and this fudge has become the most popular in America. 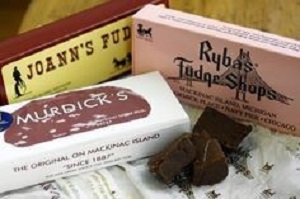 The Mackinac Island Fudge Festival (August 21-23, 2015) offers “Dining Under the Influence of Fudge,” “Fudge on the Rocks,” Michigan craft beer tastings and the Daddy, I Want the Golden Ticket” giveaway.

May’s Fudge business started in 1881 in Atchison, Kansas before eventually migrating up to Mackinac Island. Harold May, came to the island in the 1930s to work for Murdick’s. During WWII sugar rationing, Harold May decided to only make fudge in the mornings and open the stores at noon every day, selling only 1 pound of fudge per customer. 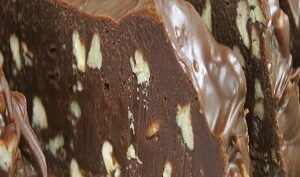 Kilwin’s creamy Mackinac Island fudge comes from an original recipe developed by Don & Katy Kilwin. Having purchased a marble table in 1948, Don Kilwin began hand-crafting fudge shortly thereafter. Over the years they have added many flavors that are enjoyed in stores around Michigan and throughout the country.

Joan and Frank Nephew opened the first Joann’s Fudge Store on Mackinac Island in 1969, next to the old McNally Cottage. One year later, a second Location opened in a historic building in the center of downtown and in 1980 a third location was added in Mackinaw City. Today, Joann’s Fudge is a third generation family business. 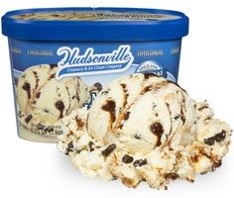 Michigan-based Hudsonville Ice Cream proudly produces this Mackinac Island Fudge flavor, made with the best Michigan’s famous island has to offer. If you want to enjoy the Mackinac experience all year-round—a tradition matched only by the island itself. Find this flavor at Sadie’s Ice Cream Parlor inside the Grand Hotel on Mackinac Island. 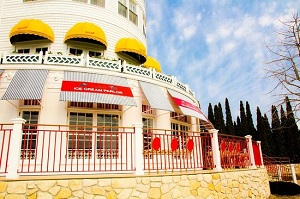 In nearby Mackinac City…

Founder Jim Marshall was born and educated on Mackinac Island and his ancestry dates back to the early 1820s. In 1952, Jim, his wife Oradelle and their son Dean opened their first candy store under the name Marshall’s Driftwood Fudge on the Island’s Main Street. Today, find their third-generation, 6000-square-foot Marshall’s Fudge Shop in downtown Mackinaw City.

Devon’s Mackinac Island Fudge Co. has operated in the Mackinaw area for 18 years. This 30+ employee operation his turned into a year round opportunity to serve America with some 60 flavors of fudge as well as other treats. 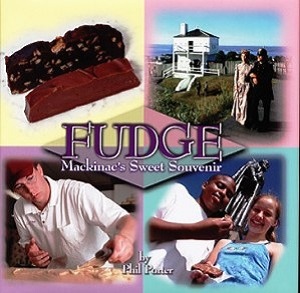 For more about the Mackinac area fudge shops and their history, pick up a copy of Fudge: Mackinac’s Sweet Souvenir by Phil Porter, Chief Curator and Fudge Taster at Mackinac State Historic Parks ($7.95 / hardcover).

Mackinac Island and fudge. Both symbolize indulgence, fantasy and escape. But there’s more to fudge than sugar, butter, chocolate and cream. This book highlights the personalities that molded the business from the arrival of Henry Murdick in the late 19th century to the dominance of the May family in the mid-20th century and the marketing revolution started by Harry Ryba in the early 1960s. 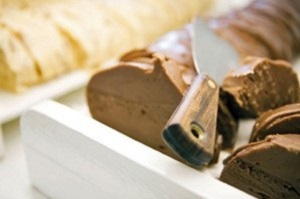 Porter stirs up the past to find the hard work and sometimes bitter controversy behind this sweet souvenir. In his hunger for truth and historical accuracy, Porter dug deep into the kitchens and cupboards of the fudge culture. No appetite for history, no taste for sweet truth will be satisfied without reading Fudge: Mackinac’s Sweet Souvenir.

If you like this story, you may also enjoy In Search of S’mores in celebration of “National S’more Day” on August 10.