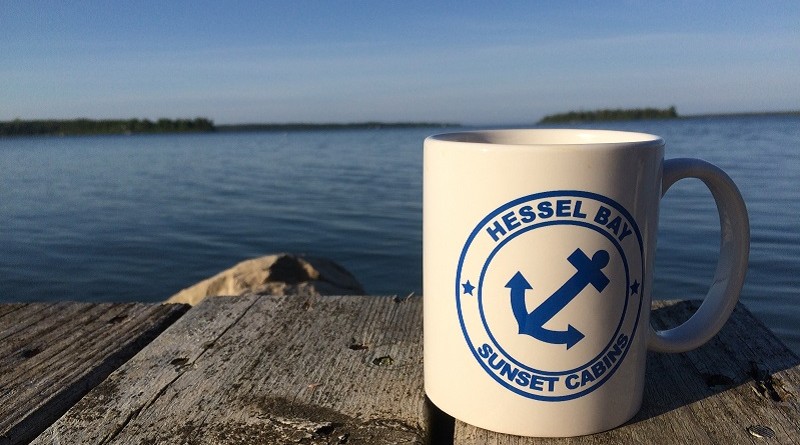 For years, I’ve heard about (and even written about) the Upper Peninsula communities of Hessel and Cedarville, the historic harbor towns on the mainland around the Les Cheneaux Islands. And while I was casually aware of their significance, I had yet to visit. Yes…I admit, I’ve written about their events and natural activities, without having actually been there. GASP!

Well, last month I finally had the opportunity to trek to “The Snows” as they’re referred to by locals, for a three-day adventure full of history and education. And, the fact I was able to cross “Kayak the Les Cheneaux Islands” off my 2015 bucket list was a bonus!

French for “The Channels,” this area is home to a group of 36 small islands that stretch out for 12 miles through the waters of northern Lake Huron. All but one island, Government Island, are privately owned. 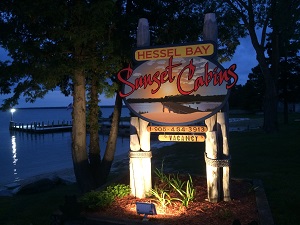 The minute I pulled up to the Hessel Bay Sunset Cabins, I knew I was in for a treat. A stone’s throw away from the jet blue waters of Lake Huron at the west entrance to the Les Cheneaux Islands, this quaint complex offers six cabins, a private beach area, docks and unspoiled views of a handful of the islands.

The resort itself sits on over an acre of land (300 feet of frontage on Hessel Bay), just blocks from the Hessel Marina, Market & Deli, EJ Mertaugh Boat Works and Les Cheneaux Culinary School (and less than a mile from Woods & Water EcoTours). This proved to be increasingly important to me as those were all stops on my itinerary!

Becky and Perry Kogelschatz greeted me upon my arrival and made me feel right at home. We talked about my statewide travels, their connections to Grand Rapids and their history of owning this resort for more than a dozen years. They made leaving on Friday a difficult decision—I could have stayed on for much longer (and plan to come back for an extended visit in the fall).

In planning my trip to the Les Cheneaux Islands, I found a common theme in my research: there were things to be learned here! 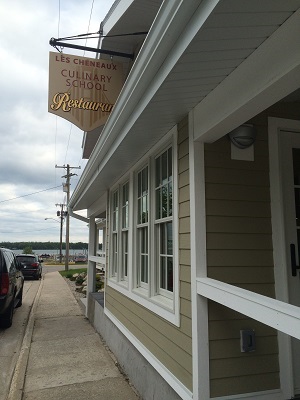 The newly opened Les Cheneaux Culinary School & Restaurant in Hessel provided more than one tasty meal during my stay. Taking a recommendation from friends in the area, I started with the duck prosciutto dates, followed by a chopped salad with spring vegetables and a champagne honey vinaigrette and ended with rainbow trout—sourced from Harrietta Hills Trout Farm (one of nearly two dozen local producers). An impressive Michigan wine, beer and spirit list also complimented the menu. Under the auspices of Executive Chef Zach Schroeder, the school offers classes from September through May with the restaurant open during the summer (as well as for events and groups during the off-season). 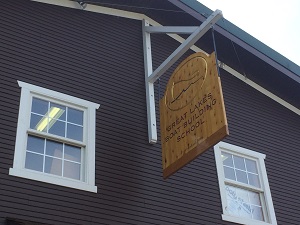 Considered one of the top programs in the country, the Great Lakes Boat Building School in Cedarville not only offers a two-year program for those looking for professional careers in boat building, but throughout the summer months the general public with an interest in this craft can also take part in a series of workshops. Whether it’s making a paddle, a kayak or a dinghy, hobbyists will find passionate and qualified instructors at the helm of this unique school. Since opening in 2005, this school has also garned some high-level commissions including this summer’s completion of August Glory—a 32-foot Cornish pilot gig for the USS Constitution, the oldest ship in the U.S. Navy and the oldest commissioned naval vessel afloat in the world (launched in 1797 and named by George Washington himself). 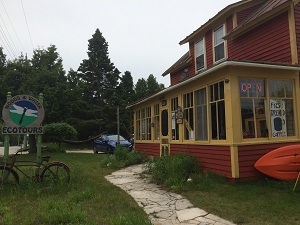 With Woods & Water Eco Tours I was finally able to get out on the open waters of Lake Huron for a three-hour paddle to and around Marquette Island. I joined owner and guide Jessie Hadley and a family of five from Hudsonville (with three daughters, between the ages of 6 and 12) for this refreshing and educational trek. As we passed by the shoreline, Jessie would point out various plants and trees, she could identify birds first by their sounds and then pointing them out to us in the distance. The Mackinac area is well-known for its raptors, so we were pleased to have not one but two bald eagle sightings during our trip. Woods & Waters offers a wealth of excursions, both on water and on land, for those looking to get an up-close look at the natural wonders of the area. 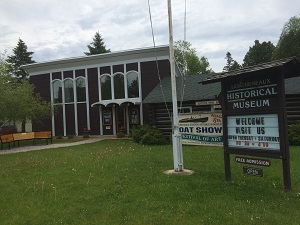 My visit also included a stop at the Les Cheneaux Maritime Museum and Historical Museum, EJ Mertaugh Boat Works (and their newly opened seasonal North Coast Company serving homemade fudge, ice cream and gourmet coffee), the Pickle Point gift shop and the Cedarville Public Library, where I did a crayon rubbing of one of the commemorative family bricks for a downstate Michigan friend now living in South Carolina. 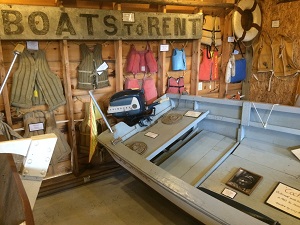 Unfortunately, I was a week early for the inaugural Aldo Leopold Festival (June 19-21, 2015) which celebrated the life of one of the region’s most noted summer visitors—a conservationist, forester, philosopher, professor, ecologist and author of the A Sand County Almanac (1949). Leopold was influential in the development of modern environmental ethics and in the movement for wilderness conservation. Between the 1890s and 1919, the Leopold family spent several months a year at their cottage on Marquette Island where the “Aldo Leopold Preserve” can now be found.

My trip was also two months ahead of what is undoubtedly the largest annual event in this region—the Antique Wooden Boat Show & Festival of Arts, Aug. 8, in Hessel. Now in its 38th year, this event showcases the finest classic boats including launches, sailboats, runabouts, cruisers, dinghies, rowboats and canoes. This year’s focus will be the Hackercraft models which were built in the Detroit area from 1914 to 1957. On the art side, a variety of local producers gather to showcase and sell everything from paintings, pottery photographs, glass jewelry, dolls, wooden toys and other fine items.

During my next trip to Les Cheneaux, I hope to delve more into the local flora and fauna (walking in the steps of Aldo Leopold) as well as the growing birding opportunities offered by the Little Traverse Nature Conservancy. I want to explore the Lex Cheneaux Area Artisan Cooperative, take a bike ride on one of the trails that wind through the countryside and actually set foot on one of the many islands.

Footnote: One thing that has always confused me was how to pronounce Les Cheneaux but I finally think I have it: Lay Sh-NO. You’re welcome!

Reprinted with permission from the Pure Michigan Blog.